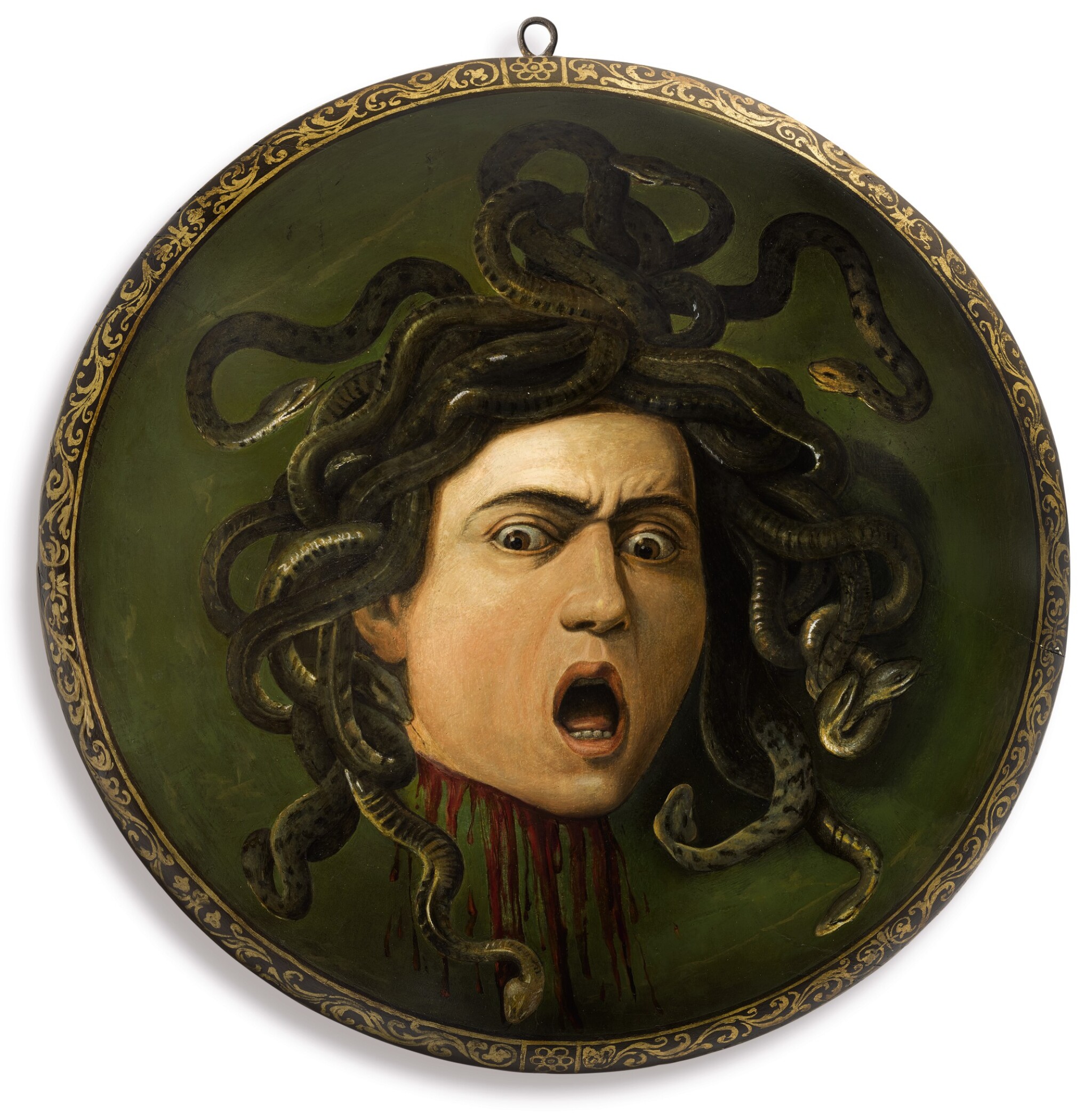 The panel is convex, circular, and in the shape of a shield. It is backed with a few strips of canvas that are red in tone. Overall, the image reads well beneath a clear varnish. There are some very thin cracks to the surface of the panel, including one that runs diagonally from the center of the right edge, one in the lower right background, and a few very short and fine cracks near the edge at the upper left. There are a few scattered losses near the center of the right edge, what appears to be some small areas of inconsistency to the varnish in the snake hair above the forehead of Medusa, and thin lines of discolored restoration that run horizontally near the lower right edge and the upper left edge. Inspection under UV reveals areas of retouching in the background, including in the green around the blood at lower center, in the lower right corner beneath the diagonal crack, and near the center of the left edge. There are some looser strokes in the background around the snakes at upper center. There are some scattered spots of restoration in the snakes and in the decorative border, and there appear to be some thin strokes in the shadows of the snake hair to the right of the head. The face of the figure fluoresces under UV light. Offered unframed.

From the bright green background to the convex and circular shape, this arresting image closely follows Caravaggio’s Head of Medusa, one of his most technically accomplished visual inventions. Today, that painting is preserved in the Uffizi Gallery, Florence, where it was widely copied as early as the nineteenth century. Caravaggio's original was commissioned around 1598 by Cardinal Francesco Maria del Monte as a gift for Ferdinando I de' Medici, Grand Duke of Tuscany.1 Soon after entering the Medici collection, it was moved to the grand-ducal Armory at the Uffizi, where it was part of a theatrical display of parade armor and weaponry, upheld as a shield by a jousting mannequin adorned in Persian armor, a gift from Abbas the Great, Shah of Persia. It is thought by some that Caravaggio also explored this same idea in an earlier and slightly smaller version datable to circa 1596, today in a private collection in Milan.2 The Gorgon Medusa is a recognizable figure from Greek mythology. With snakes for hair and a monstrous gaze, she turned anyone who looked directly at her to stone. Even after her death at the hands of Perseus, who used a mirror to avoid direct eye contact in his attack, her decapitated head still petrified those who dared look her in the eye.

In Caravaggio’s exploration of this composition, he used his own face for that of Medusa’s by using a convex mirror, in essence granting him immunity from her gaze. Though decapitated, she is rendered with palpable life, and her furrowed brow, silent scream, and shocked gaze, suggest the moment captured is the fleeting one between life and death. The anonymous artist of the present shield, who was likely active in the nineteenth century, has notably and carefully preserved all of these details of the Medici shield that have helped secure its intriguing fame for centuries.