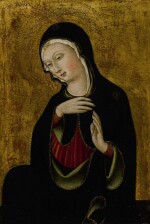 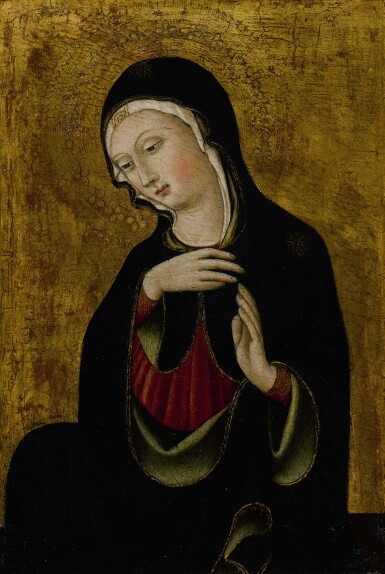 This painting is in good condition overall. In the flesh passages, retouching appears to be limited to a few tiny dents and to small touches of restoration, mostly at the edges, while visually obtrusive cracks have been lightly suppressed with retouching. In the Madonna's dress and in the inside of her mantle, age-related fading in the shadows has been addressed with restoration. The blue mantle has darkened over time — a common aging phenomenon — and some degree of toning may have been applied to this passage. Retouching in the blue applied to address wear along the craquelure is darker and more opaque than its surroundings, but this is only noticeable under strong light. Loss around the perimeter of the image area suggests the frame may have been altered, as do scored-in cracks crossing from the image plane onto the molding on the right side. The varnish is clear and even. The vertically grained wood panel support displays a mild lateral warp. This painting may be enjoyed in its current state.

Sano di Pietro was one of the most successful artists in 15th century Siena. Born in 1405, he is thought to have been apprenticed to Sassetta and was registered with the Guild in 1428. An early and important independent commission is his signed altarpiece of 1444 for the Gesuati church of San Girolamo (now in the Pinacoteca Nazionale Siena; predella in the Musée du Louvre, Paris); and, in 1445, he signed a fresco of the Coronation of the Virgin in the Palazzo Publico. His earliest works, prior to the mid-1440s, had been thought by some scholars to be identifiable with those grouped under the anonymous Osservanza Master.  Roberto Longhi was the first to group together works by the Master, drawing together paintings formerly given to Sassetta and Sano di Pietro, among others.1 The artist had variously been identified as Sassetta (by Pope-Hennessy, Cavalcaselle and initially Berenson); as the young Sano di Pietro (by Brandi, Berenson, Boskovits and more recently De Marchi);2 and least convincingly of all as Francesco di Bartolomeo Alfei.3 Graziani's rather tentative proposition that the Master of the Osservanza might be identified with Ludovico (Vico) di Luca, a documented assistant of Sassetta, was seen as the most likely hypothesis until recently.4 In 2011, however, documentary evidence relating to an altarpiece of the Nativity of the Virgin at Asciano was published by Maria Falcone identifying its creator – the Master of the Osservanza – as the young Sano di Pietro.5

Sano was regularly employed by the Comune of Siena as well as by the confraternities and regular orders, especially the Franciscans. While he produced altarpieces, predellas, biccherna covers, and manuscript illuminations, he is perhaps best known today for his charming and intimate depictions of the Madonna and Christ Child, either alone or often surrounded by angels or saints, that adhere faithfully to the Sienese Trecento tradition.

This particular example is a highly characteristic and refined example by the artist which, in a rare occurrence, depicts the Madonna as a single figure. Self-contained compositions depicting the Madonna alone are not unique in Sano's oeuvre, though they do typically form part of a larger narrative construction. It has, indeed, been suggested that this panel would have originally served as the pinnacle for a larger polyptych, which would logically explain the Madonna's downward gaze. As such it would have almost certainly been paired with an angel Gabriel or praying saint that would have sat to the left of this leftward facing Madonna.

4. Graziani 1948, pp. 75– 88. Christiansen tentatively agreed with the identification put forward by Graziani, seeing it as the most likely solution (see Christiansen in New York 1988–89, p. 100) but Machtelt Isräels has more recently noted that Vico is an unlikely candidate on the basis of documentary evidence (see M. Isräels, Sassetta’s Madonna della Neve. An Image of Patronage, Leiden 2003, p. 29, note 75).