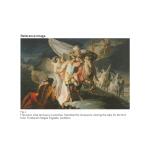 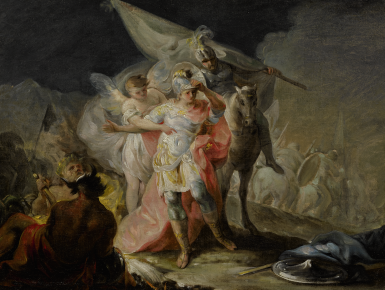 This work is in very good condition. The canvas has a good European glue lining. The cracking is slightly raised, but the paint layer is stable and retains a nice texture. The work is clean and varnished. Retouches have been well applied. These can be seen under ultraviolet light in very small spots here and there in the grey background color on the right and in the center of the left side, addressing slight transparency and a couple of cracks. There are retouches to very slight thinness in the dark sky above the flag in the upper center and in the upper left. There is also a 3 inch horizontal line of retouching in the dark sky in the upper left, which may address a thin break in the canvas. The condition is very good throughout the primary figure group, including the two figures in the lower left, and there are only a handful of tiny spots of retouching here. The restoration is effective, and the work should be hung in its current state.

﻿"This lot is offered for sale subject to Sotheby's Conditions of Business, which are available on request and printed in Sotheby's sale catalogues. The independent reports contained in this document are provided for prospective bidders' information only and without warranty by Sotheby's or the Seller."

There acquired by a private collector;

The earliest known painting by Goya, this oil sketch is an extremely rare example of the young Francisco de Goya's artistic practice; its bold strokes and bright coloring show the confidence of the master at the very beginning of his career. Although Goya is not today remembered as a history painter in the traditional sense, the present oil sketch, which is also a study for the very first finished painting known by his hand, fits into this genre.

In 1771, while on a two-year journey through Italy, Goya responded to a call for paintings from the Academy of Fine Arts in Parma. The Academy solicited works illustrating the moment that the Carthaginian general Hannibal saw Italy for the first time after crossing the Alps. The call specified in detail that contestants were to depict Hannibal “in such a way that he is raising the visor of his helmet and turning towards a Genius, who takes him by the hand and points to the beautiful, enslaved Italy far away in the distance; and around his eyes and by his expression indicate his joy and confidence at the victory to come.”1 Goya fulfilled the restrictive instructions by showing Hannibal with his hand raised to his visor and a winged Genius gently guiding him in the direction of the Italian plains.

In the present oil sketch, Goya finalized the positions of the figures of Hannibal and his attendant soldier, but eventually changed the pose of the Genius, who actively points toward Italy here. In the final painting (fig. 1), Goya would add in the upper right corner the personification of Fame in her chariot waiting to crown the conqueror with laurel to hint at the victorious ending of the story. He likewise placed the central figures on more of a raised stage to emphasize the drama of the revelatory moment when Hannibal looks down upon Italy after ascending a mountain. The figure in the lower left foreground, a man with bull’s horns reclining on an amphora that spouts water, would remain in the final composition and represents the River Po, which Hannibal had to cross. The sinister nature of this figure also foreshadows the dark, mysterious themes with which Goya would later be associated (see fig. 2).

Goya was only 25 at the time of the Parma competition, and hoped that winning would bring him fame and prestige when he returned to the Bourbon court in Spain, as Duke Filippo di Borbone, nephew of Charles III, was the patron of the Academy. Despite his best efforts, he lost to Paolo Borroni, an artist essentially forgotten today. The Academy did award Goya an honorable mention and praise his “grand conception” and lively brushwork, but indicated that his coloring was lacking and that his adherence to the instructions left something to be desired.2 In fact, Goya’s bright color palette was completely in line with contemporary Italian art, causing the committee to refer to Goya as a Roman, and eventually causing the final painting to pass as an Italian work when it resurfaced in the mid-nineteenth century.

Unknown for many years following its completion and likely return to Spain, the final painting was purchased in Madrid as an Italian work by archaeologist, historian, and businessman Fortunato Selgas (1839 – 1921). Thereafter it was misattributed to various Italian masters until the 1980s, when it was restored to Goya’s oeuvre. Shortly after that discovery, the present oil sketch also resurfaced. The final painting, owned by the Fundación Selgas-Fagalde, was displayed at the Museo Nacional del Prado in Madrid in 1993, along with preparatory sketches, and again from 2011-2017.

The present work reveals the beginnings of Goya’s development as an artist, particularly his early interest in classicism, a light color palette, and the prestige of history painting. The lively oil sketch illuminates his working process for large commissions.