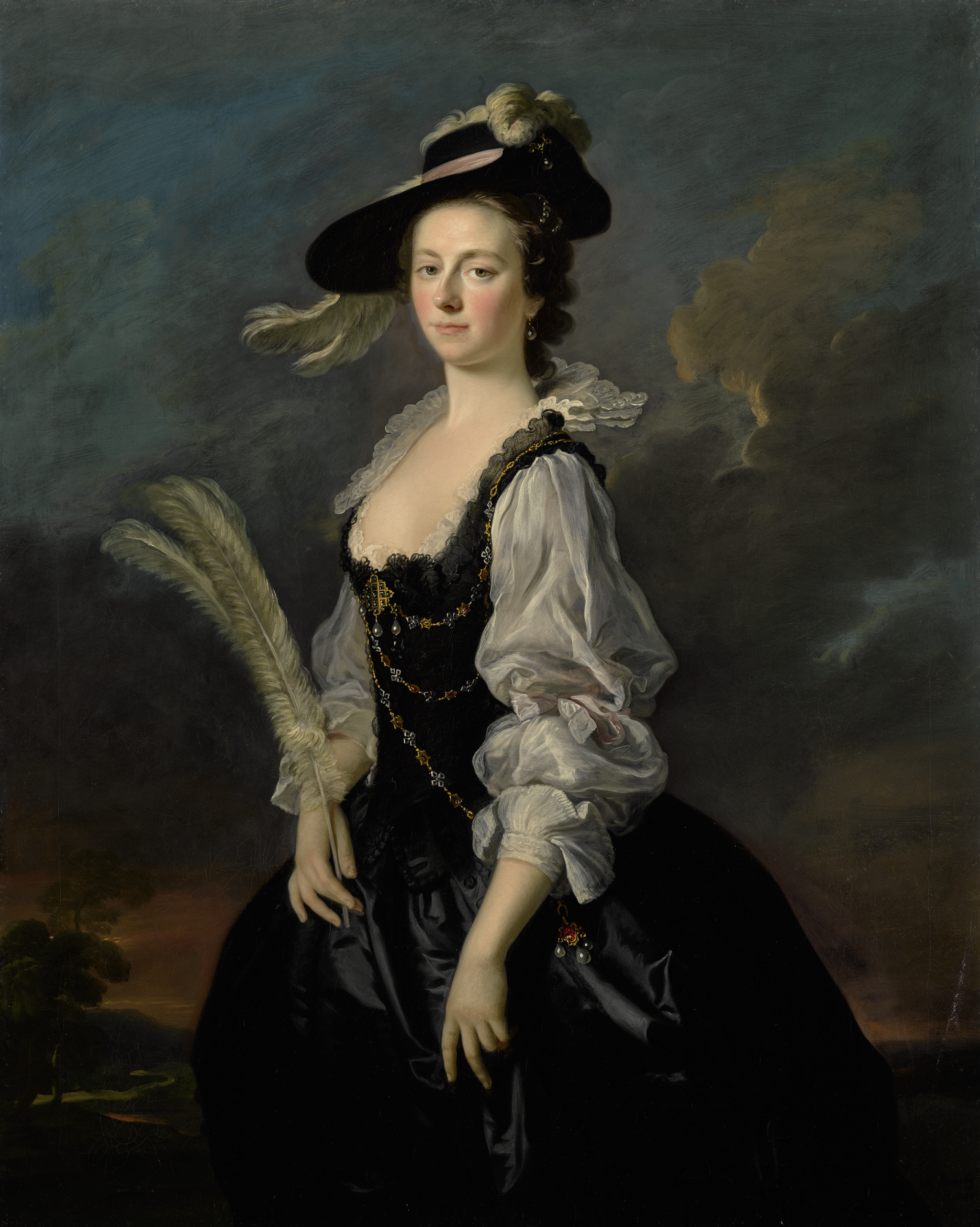 This work is in beautiful condition. The canvas has been lined with a traditional glue as an adhesive. The surface is attractive. The impasto in the jewelry remains well defined. The work shows no abrasion at all. The only retouches are applied in the face, neck, chest and hands addressing some cracking that has developed in the flesh color, and a few spots around the extreme edges. These retouches are very well applied, and the work should be hung as is.

By descent in the family of the sitter to Mrs. Cholmely Hale, New England, Hertfordshire;

From whom acquired by William Lever, 1st Viscount Leverhulme, 21 June 1918;

Thence by descent in the Leverhulme collection, Thornton Manor, Wirral, Merseyside, hanging at The Hill and subsequently transferred to 39 Upper Brook Street;

London, Kenwood and University of Nottingham, Allan Ramsay, 1958, no. 6;

Edinburgh, National Gallery of Scotland, Allan Ramsay his Masters and Rivals, 1963, no. 51;

This confidently rendered portrait of Mrs. Jane Madan, signed and dated 1746, was painted by Allan Ramsay in London during an extremely successful period of his early career. By this time, he had established his reputation in London as a sophisticated and elegant portraitist who was able to expertly capture the likeness of his sitters, drawing on his early studies in Italy with some of the most fashionable Italian portrait painters of the era, Francesco Imperiali and Pompeo Batoni.

Here, Mrs. Madan is shown in what was known as "Van Dyck" costume, a fashion that was popular among high-born women during the 1730s and 1740s, particularly at masquerades in places such as Ranelagh Gardens. Inspiration for this attire arose from the popular portrait by Rubens of Suzanne Fourment, which was owned at the time by Sir Robert Walpole (fig. 1).1 The accomplished drapery painter Joseph Vanhaecken, who specialized in painting Van Dyck costume and completed a chalk study of a lady in the same costume and pose as Rubens' work,2 assisted portraitists such as Ramsay and Thomas Hudson during the 1740s, and he possibly assisted with the costume of Mrs. Madan in the present painting.3 Chalk studies by Ramsay that resemble the present sitter's hands are further evidence of the careful attention he paid to this canvas and capturing the perfect likeness of Mrs. Madan.4

The sitter of this portrait, Mrs. Jane Madan, was one of the three daughters of the distinguished judge, Sir Bernard Hale, Kt (1677-1729) of King Walden, Hertfordshire, and his wife, Anne Thoresby. In 1751, she married the Rev. Martin Madan (1726-1790), a scholar, lawyer, and prominent clergyman, who became chaplain to the Lock Hospital near Hyde Park Corner and who in 1780 published a controversial book advocating for polygamy, titled Theylyphthorn. Together, Jane and her husband had five children.

Ramsay painted a number of portraits of members of the Hale family. Three female portraits were sold by a descendant on 21 March 1922, two of which were dated 1748. One of them is probably of Anne, one of Sir Bernard Hale's daughters, later Mrs. Stillingfleet (Worcester Art Museum, Massachusetts), one is probably Charlotte Farnally, wife of William Hale of Kings Walden (Private Collection), and the third is probably Elizabeth Morice, wife of Paggen Hale (untraced). A further portrait called Miss Hale and dated 1740 was sold at Sotheby's on 9 November 1995, and is probably Catherine Hale, who married Thomas Nugent.