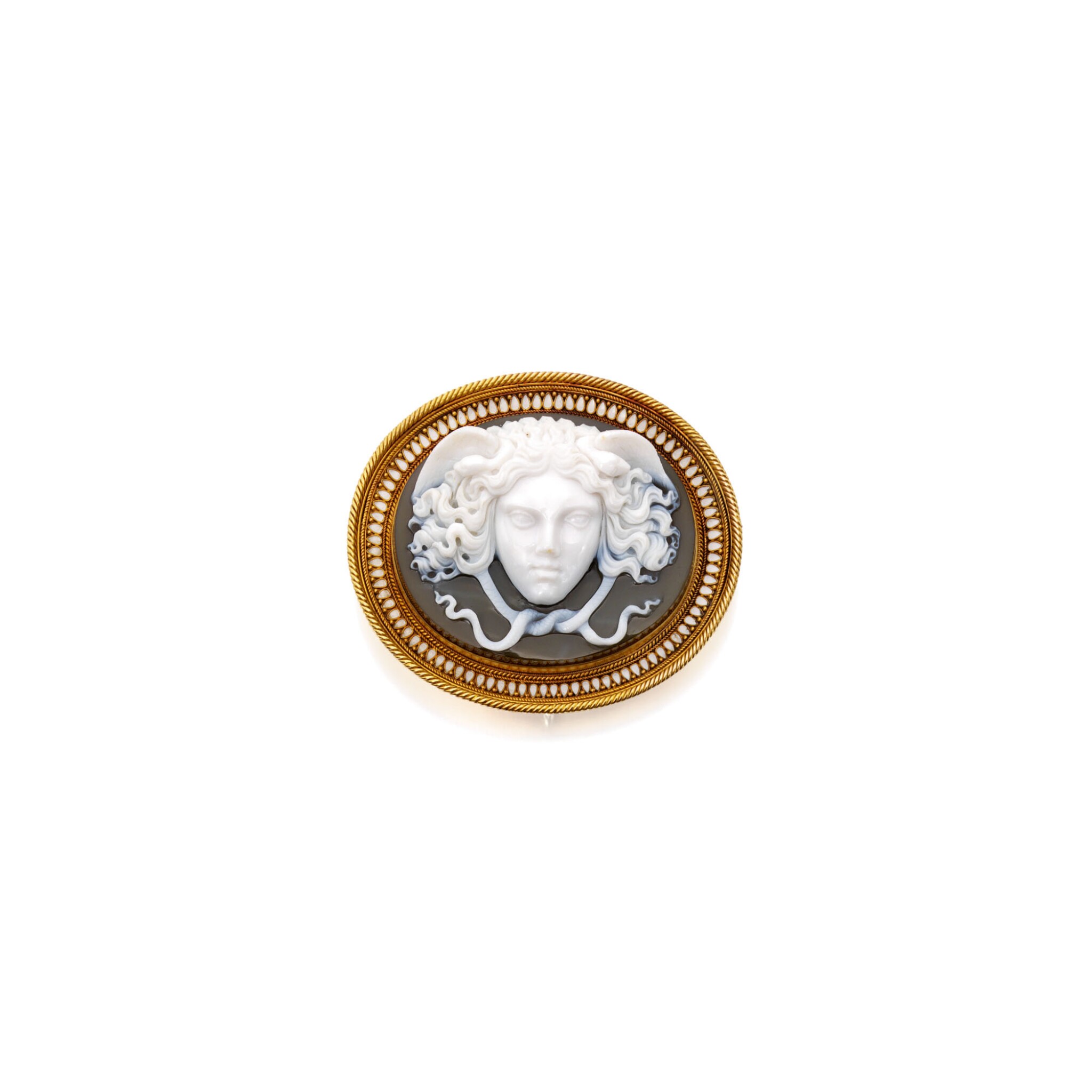 Featuring an onyx and agate cameo of Medusa measuring approximately 63.0 x 54.0 x 4.0 mm, framed within an egg pattern surround applied with white enamel and gold ropework, reverse fitted with a pendant loop on top and pendant hook on bottom, attributed to Benedetto Pistrucci; circa 1840-1850. With a fitted Wartski box.

In very good condition, with minor tarnish and some light tarnish to the reverse side of the mounting. Mounting tests as 18 karat gold. The cameo in excellent condition, the Medusa head carved into a band of white, the background a band of light brownish grey, the back a band of onyx; a few very small areas of abrasion to the chalcedony can be seen under 10x magnification, including on the tip of Medusa's nose, the top of one wing, and a few strands of hair. Frame dimensions approximately 2½ x 2⅛ inches. Gross weight approximately 32 dwts.

The gorgon Medusa has been portrayed in various ways since classical antiquity, sometimes grizzly and frightening, other times sullen and somber. This cameo of Medusa, carved in the 19th century, is one of the more sophisticated, sensitively rendered versions. The acclaimed gem engraver, medallist, and coin engraver Benedetto Pistrucci (1783-1855) may be attributed as the most plausible author when comparing the jasper cameo signed by Pistrucci in the permanent collection of the Metropolitan Museum of Art in New York (see Cameo Appearances, James David Draper, New York, 2008, p. 44 no. 95). Although Pistrucci proclaimed he never copied other works, always insisting on creating his own versions, it seems this Medusa owes much to the ancient Roman marble mask known today as the Rondanini Medusa, now in the Glypothek in Munich.

The Rondanini Medusa is a Roman or Hellenistic copy of a 5th to late 4th century B.C. classical sculpture, thought to be one of the earliest representations of the “beautiful gorgoneion” type in Greek art. The famed sculptor Antonio Canova (1757-1822) created his masterpiece of Perseus with the slain head of Medusa, also having used the Rondanini head as a reference for his Medusa. Today, the face of Medusa is the icon for Versace, chosen because of its deep symbolism. Medusa made people fall in love with her and there was no turning back. However according to Greek myth, Perseus was tasked with slaying her, and after having done so, kept her head for its power to turn onlookers into stone, until he gifted it to the goddess Athena to place on her shield as an apotropaic, or evil-averting device.  Medusa is usually represented with snake-like locks of hair because, as one version of the story goes, Athena then turned her beautiful hair into venomous snakes. The cameo offered here also portrays her with wings, which refer to Pegasus, the winged horse, who sprung from her head once she was slain.