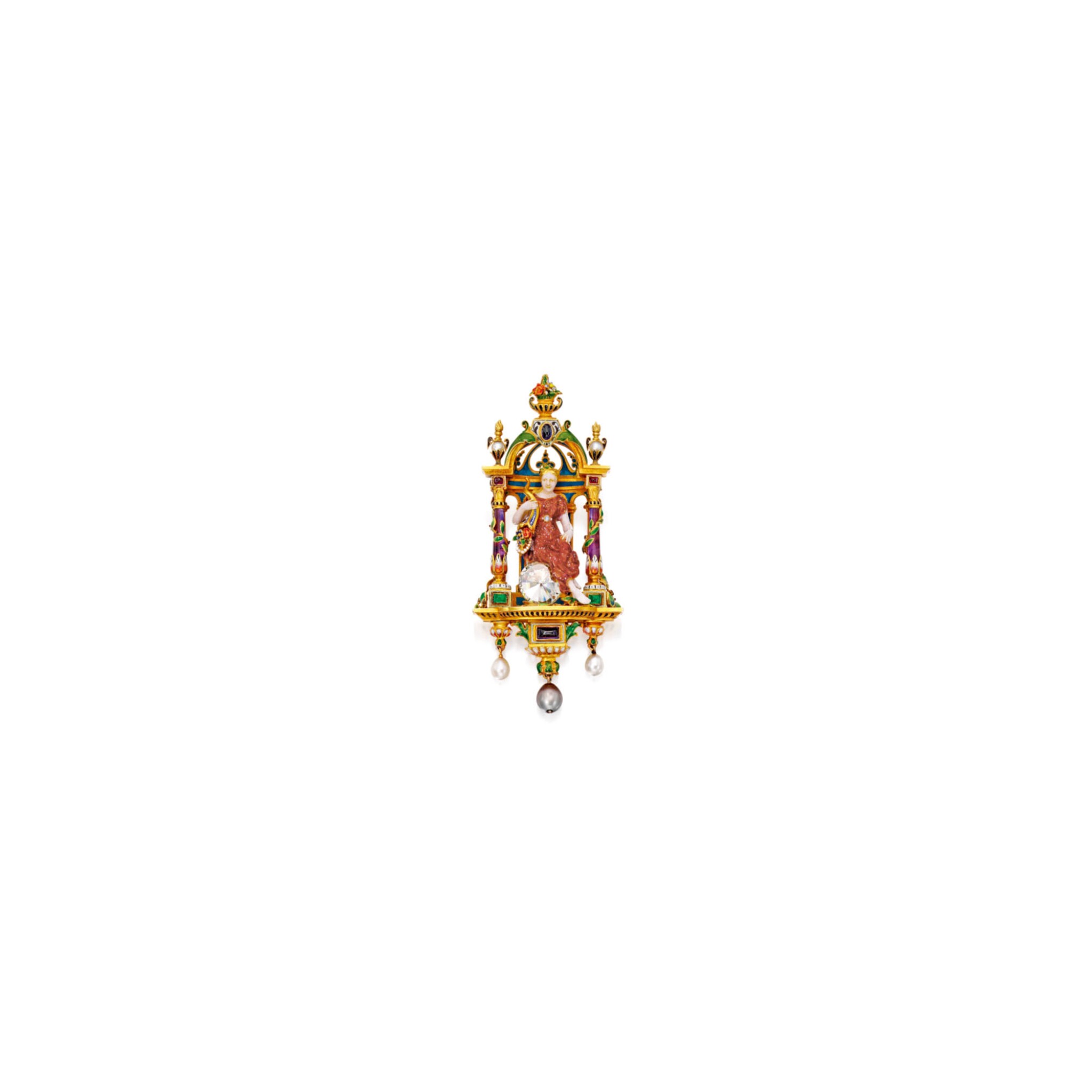 Depicting Fortuna, the Roman goddess of fortune and good luck, applied with polychrome enamel, seated on a globe composed of a circular fancy-cut diamond, holding a cornucopia, within an elaborate architectural surround applied with further enamel, with carved amethyst columns, and cabochon rubies, emeralds and sapphires, surmounted and suspending white and gray pearls, the reverse with enamel detail, signed Fic Boucheron, Paris, with French assay and partial workshop marks; circa 1880. With a fitted Wartski case.

Please note that the pearls have not been tested for natural origin.

The brooch offered here was created by Maison Boucheron at a moment in the late 19th century when historical revivalism had flourished to its fullest extent. Renaissance revivalism echoed the past greatness of France in recurrent themes and styles derived from sixteenth century painting, sculpture and architecture. Models for jewels were inspired by ornament prints of the late fifteenth century forward, and these prints were popular collectibles, especially for jewelers. In the 1830s and ‘40s, French goldsmiths created romantic, sculptural jewels inspired by Gothic architecture, as can be seen in François-Désiré Froment-Meurice’s brooch “Harmony” around 1847 which features a divine figure playing a musical instrument accompanied by putti within an architectural setting. This was also a period of the revival of various techniques of painted enameling such as en ronde bosse, champlevé, émail translucide, and émail cabochonné, as well as painted enamels of pictorial scenes. Enameling was most highly regarded in France, and Paris was considered the great modern school of enamel. Other French firms that created examples in Renaissance revival style emphasizing the use of enamel included Falize, Wièse, Fannière Frères, Fouquet and Teterger.

In 1867 Frédéric Boucheron won a Grand Prize at the Paris Exhibition for his jewels in both the archaeological revival and Renaissance revival styles, and in 1876 the French government presented Boucheron with a Legion of Honor award for his creations. His contemporary Henri Vever, both a jeweler and noted jewelry historian commented: “Boucheron made pieces that very few of his colleagues would have dared to make at the time.” In this jewel, Boucheron designed a brooch which encompasses all the prevailing trends in French jewelry design of the late 19th century, and it is imbued with rich symbolism that can be noted in several details. This small enameled sculpture of the ancient Roman goddess Fortuna is a tour-de-force of the genre. Although possibly never intended to be worn but displayed as an objet de vitrine, the central figure of Fortuna boldly enameled en ronde bosse in crimson and white, is portrayed with her identifying attributes; the wheel on which she sits (in this case, a large circular fancy-cut diamond) symbolizes that luck, good or bad, never lasts, and the cornucopia she holds is the source of good and plenty, overflowing with precious gemstones. The columns flanking her are formed of carved amethyst which is a gemstone of spiritual protection and purification, and these are supported by bases set with cabochon sapphires which not only represent power and strength, but sapphires are also symbols of kindness and wise judgment. Suspended below and set in the jardinères on either side of the apse above are pearls, which are regarded as symbols of hidden knowledge.

﻿Specific sources of inspiration for this superb jewel are most probably the architectural and figurative pendants of Erasmus Hornick, a goldsmith from Antwerp active in Augsburg in the second half of the 18th century, such as those illustrated in Yvonne Hackenbroc’s Renaissance Jewellery where the mythological figures are surrounded by elaborate architectural frameworks. The figure of Fortuna and the symbolism central to this jewel are also the subject of a contemporary pendant in Renaissance revival style created by Falize, after a design by Virgil Solis of Nuremberg dated 1560.