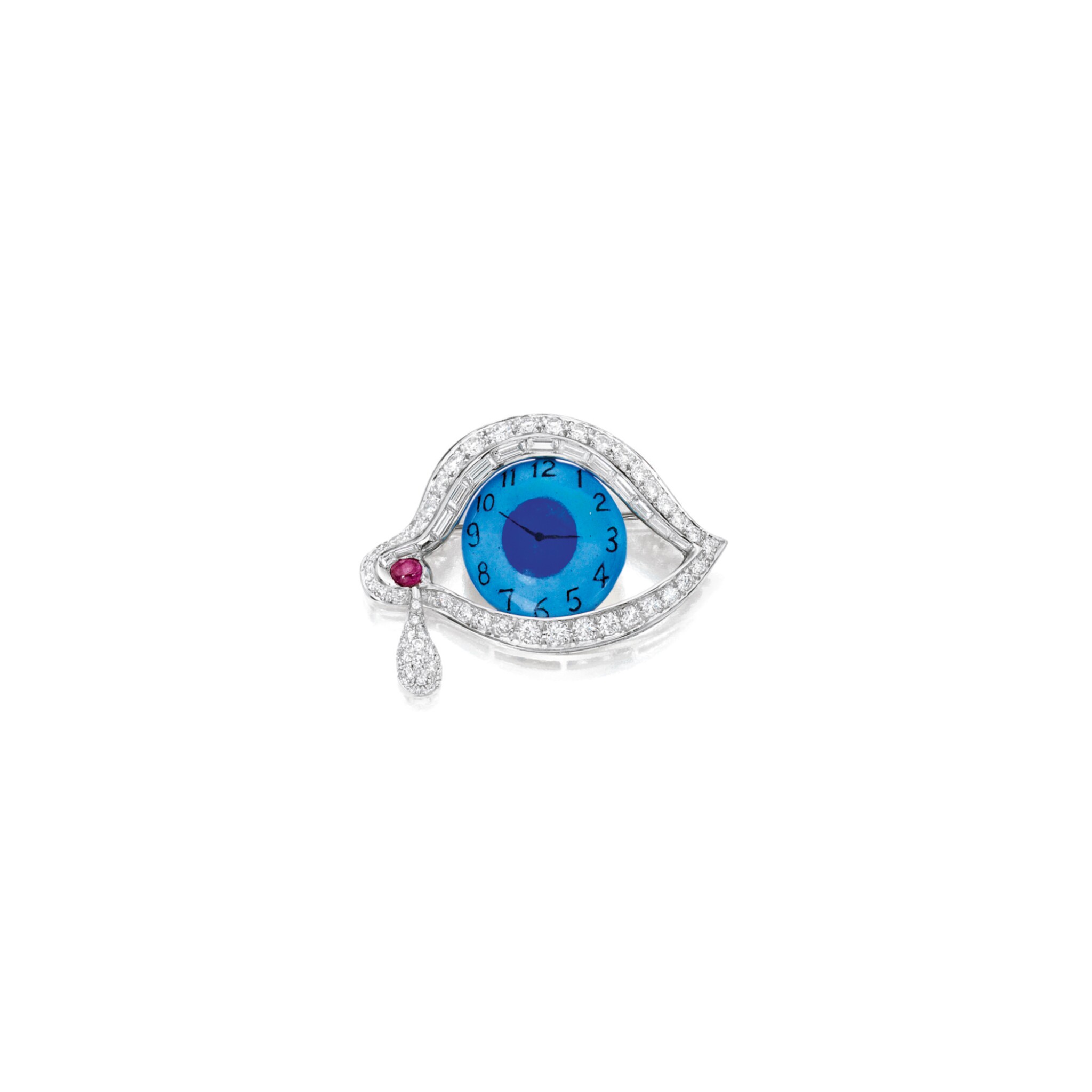 Designed as an eye, the dial applied with blue enamel, accented with round and baguette diamonds, the teardrop highlighted by a cabochon ruby and round diamonds, signed Dali, Kaston.

For a brooch of similar design, see Dalí: a Study of His Art-in-Jewels, The New York Graphic Society, 1959, page 46.

Salvador Dalí (1904 - 1989), most known for his Surrealist landscape paintings and sculptures, also made his mark in the world of fine jewelry. Dalí once said of his foray into the medium, “My art encompasses physics, mathematics, architecture, nuclear science… and jewelry, not paint alone.” Dalí’s talents stretched far beyond his extraordinary gifts as a painter and draughtsman; his expansive artistic repertoire also included film, sculpture, poetry, photography and theater, often in collaboration with other artists. His exquisite jewels capture the attention and imagination like nothing else.

Dalí’s journey into this art form began around 1940, when he began working with the New York-based atelier Charles Vaillant. They famously collaborated on five pieces of Surrealist jewelry, which would be displayed at the Museum of Modern Art from 1941-42. His designs reached new heights in 1949, when he began working with the Argentinian-born jeweler Carlos Alemany of Alemany & Co. In the New York workshop, based in the St. Regis Hotel, Alemany would help create the designs, many of which were one of a kind. Dalí selected stones based on color and their symbolic associations but was also heavily involved in all steps of the production process and craftsmanship of the jewels. Their celebrated partnership would result in several of Dalí’s most important jewels, including his Eye of Time brooch, which is now on permanent display at the Fundació Gala-Salvador Dalí.

Lot 528 demonstrates a superb example of The Eye of Time design. Composed of two shades of blue enamel, mounted in platinum, set with round and baguette diamonds and a cabochon ruby, the hands of the clock are suspended in time, without a running movement. Originally conceived in 1949 as a gift for his wife Gala, it plays on the themes and myths that obsessed the artist’s thoughts and incorporates two of the most iconic Dalí symbols: the eye and the clock.

Designed in 1949 and inspired by Mae West’s come-hither smile, lot 530 is composed of two rows of lustrous pearl teeth between ruby lips, made by one of Dalí’s jewelers, Henryk Kaston (1910 - 2010). Lot 529 is another example of Dalí’s creations brought to life by Kaston - depicting a heart that steadily pulses, displaying the outstanding craftsmanship and exquisite detail of the organ.

Kaston enjoyed a remarkable career as a violinist, bow maker, restorer, collector and artist jeweler to the stars of the Metropolitan Opera. After Dalí saw the brooch Kaston created for Rise Stevens to commemorate her role as “Carmen,” he employed him to make jewelry from some of his own sketches. Kaston’s creations have been displayed at the Metropolitan Museum of Art and are part of the permanent collection of the Vatican Library and Smithsonian Institution in Washington, D.C.

The fantastical squirrel brooch from the collection of Caroline Ireland (lot 532) invokes many of the metamorphic motifs that were ubiquitous in Dalí’s works. The ruby drop is reminiscent of those rubies used in Dalí’s Honeycomb and Pomegranate Heart (lot 529); the pearls giving a nod to the ruby and pearl lip brooches; he gold tree trunk and limbs are evocative of his Twig Cross and Persistence of Time brooches. The playful nature of the present brooch, where the pearls burst forth like an abundance of acorns and diamond flowers and leaves bloom from the limbs of the tree, stands in contrast to the dystopian vision of Dalí’s landscapes.

In 1941, Fulco di Verdura was invited by Caresse Crosby, “the literary godmother of the Lost Generation” and distinguished patron of the arts, to visit her manor in Virginia, where she was hosting Dalí and Gala, to discuss a jewelry collaboration. This resulted in the historic collaboration of five pieces of work with a surrealistic spin. A fine example of the Dogwood brooch, which was included in a painting by Dalí featured in the October 1943 issue of Vogue, is also on offer in the present sale (lot 598).

Today’s world is sorely lacking in eccentrics, but there remains the thrill of discovering distinctive designs of artist jewelry and the stories they can tell. Sotheby’s is pleased to present a superlative group of Dalí jewels in the present sale assembled through the years by various owners.