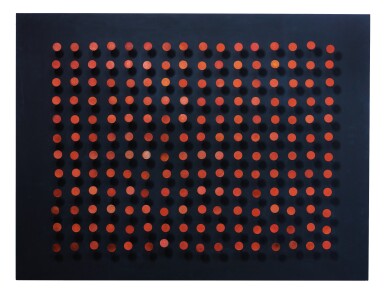 This work is in very good condition. The springs and metal circles are stable, the colors are fresh and have been professionally cleaned. Slight aging of the metal is apparent, not affecting the actual work.

Please note, there is an updated image for this lot available online.

Born in 1928, Yaacov Agam, was the son of a celebrated rabbi of legendary piety, and from the very start of his career was interested in the spiritual possibilities of art and sought to utilise art in his quest for an inner truth. “My works are divided into several types of painting which have in common a single objective: the introduction of the concept of time, duration and continuity through a new technique and a new aesthetic.” (Yaacov Agam, Marlborough-Gerson Gallery Inc. New York, 1966, exhibition catalogue, p. 9.). In the work offered here the artist invites the viewer to be a creator, to manipulate and alter the composition manually and thus create a constantly changing image.

The moveable parts applied to the background panels of Tableau Tactile: La Verité is not just a visual device: they question the very nature of the artist-observer relationship in a manner which was to arouse the keen interest of major surrealists of an earlier generation, who were amongst his most ardent supporters. “Tactile works consist of circular discs on springs on a veritable base, the discs vibrate when touched so that the image is always in the process of dissolving and crystallizing, When the discs are still the painting is in a state of neutrality with the possibility of an image emerging.” (Yaacov Agam, Marlborough-Gerson Gallery Inc. New York, 1966, exhibition catalogue, p. 19.).

At this time, Agam described his vision as follows: 'My work is for children from the age of six months to one hundred and twenty years. If you have nothing childlike in you, you shouldn't be looking at pictures. There is this childlike side in the work of the Dadaists, Klee, Miró, Calder and Picasso. I am trying to make things that are very, very serious, and what comes out of it is things that are quite friendly, gay, and sometimes even amusing...I tried to go beyond the decorative expression of most of the abstract painters of the day. I thought I could create a greater spirituality by introducing inner mobility into my works. In this way I wanted to overcome the limits of visual expression.' (Frank Popper, Agam, New York, 1976, p. 18).

As one of the pioneers of kinetic art, Agam's artwork was included in the lauded 1955 exhibition at Galerie Denise René, Le Mouvement, alongside Alexander Calder, Victor Vaserely and Jean Tinguely. In 1980, a retrospective of his work was exhibited at the Guggenheim Museum in New York.