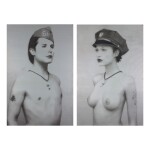 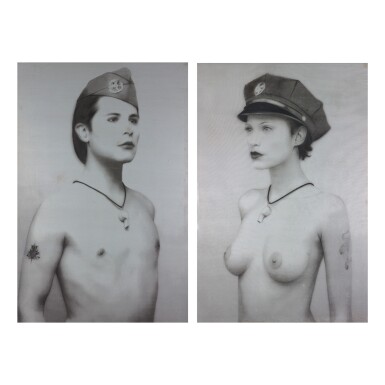 signed Nir November Hod, titled Police Man and Police Woman and dated 1999 and NY 1999 (on the reverse of each work)

oil and acrylic silver on canvas

This work is in very good condition. Original canvas.

Tami Katz-Freiman discusses Nir Hod's Soldier series in the 2005 Tel Aviv Museum exhibition catalogue and notes: "The numerous versions of male and female soldiers and police officers are thus an expression of Hod's fascination with exotic images characterized by high emotional conductivity. The political facet of these works has always been secondary. The soldiers in his fictive army function primarily as heroes. They do not belong to the Middle East, nor are they associated with political strife here or elsewhere. They bear military insignia of armies from various countries and wear farfetched uniforms, decorations, ranks and unit tags. Their symbolic battlefield has never extended beyond the boundaries of fantasy. It is a glorified army basking in the light of myths of heroism and stardom. His woman soldier (whether made in his image or in the image of a famous model or a successful rock star) is always an archetype of femininity, a symbol of a Total Woman, a super-heroine whose military uniform adds to her sexy, kinky, and romantic appeal.” (Tami Katz Freiman in “Nir Hold: An Acrobat of Emotion in the Circus of Illusions”, Nir Hod Forever, exhibition catalogue, Tel Aviv Museum of Art, Tel Aviv, 2005, p. 33-34).