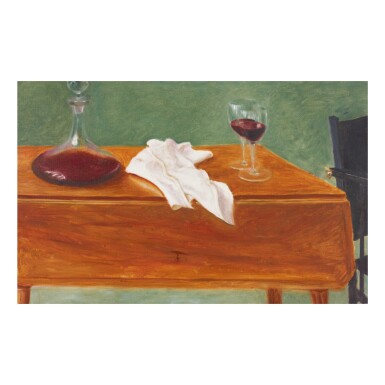 signed Arikha and signed in Hebrew (upper right); dated 24 VII 97 (on the reverse)

This work is in very good condition. Original canvas. No retouching apparent when viewed under UV light.

From the mid 1960s, Arikha gave up abstract painting in favor of painting directly from life. He executed each work in front of the subject and always completed it in one sitting. Called “one of the best painters from life in the last decades of the 20th century,” (The Economist, Avigdor Arikha, 13 May 2010) "Arikha was intent on conveying, through the quivering presence of each brush-stroke, a palpably physical sensation of stillness and the comforting warmth of light.” (David Britt, ed., Modern Art: Impressionism to Post-Modernism, 1989, p. 154). His deliberate use of time, subject and treatment “brings haunting moments of insight and... gives the object an understated and suggestive dignity.” (Charles Jencks, Post-Modernism: The New Classicism in Art and Architecture, 1987, p. 154). Arikha's subjects – whether self portraits, intimate interiors of his Paris flat, or still lives of objects such as the Saint Emilion wine poured for two depicted here – reveal a deep reverence for the physical world without unnecessary embellishment. His paintings are intimate windows into the artist's life, fragments that he has detached from his everyday world, depicted with an intensity that can not but reach out to every viewer.