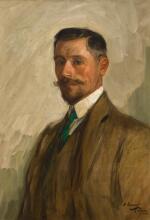 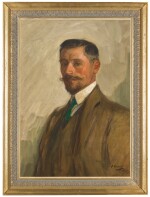 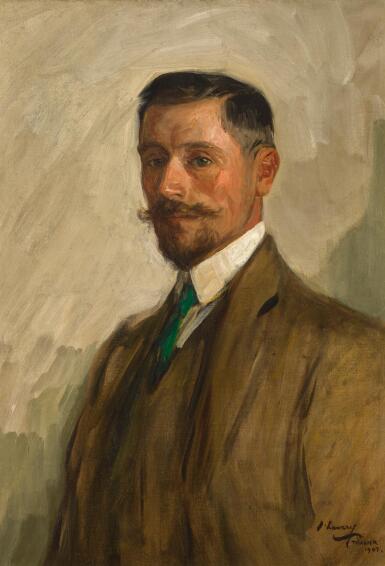 Ultraviolet light reveals some occasional and minor retouchings to the edges; a small spot in the upper right corner and a small horizontal line near the lower left corner which may relate to a small repaired tear, well executed.

Lavery’s portrait of Walter Burton Harris is characterised by the confident bravura style we find in his work in the early years of the twentieth century. While the sitter’s jacket and starched collar are swept on to the canvas, close attention is paid to the rendering of the features of a great imperial adventurer, now in middle age.

The son of a London shipping insurance broker and his wealthy Scots wife, Harris (1866-1933) attended Harrow School, and after one year at Cambridge University, gave up academia to travel at the age of nineteen (see James Chandler, ‘Afterword’, in Walter Harris, Morocco That Was, Eland ed., 2002, pp. 233-245). In 1887 he joined a diplomatic mission to Sultan’s court and soon fell to the charms of Tangier, publishing his first book on travels in Morocco in 1889. The city became his base for explorations of Arabia, as far south as the Yemen, and this too was published as a book in 1893. By the early 1890s he was sending reports of these adventures to London papers.

The growing strategic importance of Tangier however, and the rivalry of the ‘European Powers’ for influence in North Africa assured him of an audience and having contributed regularly to The Times for several years, he was officially appointed as its correspondent in 1906. By that stage he was well ensconced in the city’s expatriate community having built his own extensive villa on the outskirts of the Medina (see previous lot). He also achieved notoriety when, in 1903, he was kidnapped by the notorious warlord, El Raisuli, and held for nine days in his fortress at Zinat.

Although the precise date of Harris’s meeting with Lavery remains unknown, it is likely that they became acquainted during one of the artist’s first trips to Tangier in the early 1890s. By the spring of 1906, Harris, the painter and the anti-imperialist writer, RB Cunninghame Graham, hatched a plan to visit Fez and pay court to Harris’s friend, the pro-British Sultan, Mulai Abd al-Aziz IV. Lavery recounts their colourful encounter with native tribesmen, en route (Life of a Painter, 1940, p. 96), and his efforts to penetrate and paint a harem. Harris and he would remain firm friends and when Lavery’s daughter, Eileen, was married in Tangier in 1912, the writer was one of the guests. After the Great War, when Lavery’s attentions shifted to the Riviera, Harris remained in the city of his adoption, and from it conducted expeditions to the Far East. In 1933, on a final voyage he suffered a stroke and his body was returned to his adopted city for burial. Lavery’s portrait shows him in his heyday. An Arab-ist who would frequently don the jellabah, here he adopts the pro-consular stance of a European grandee for the painter.