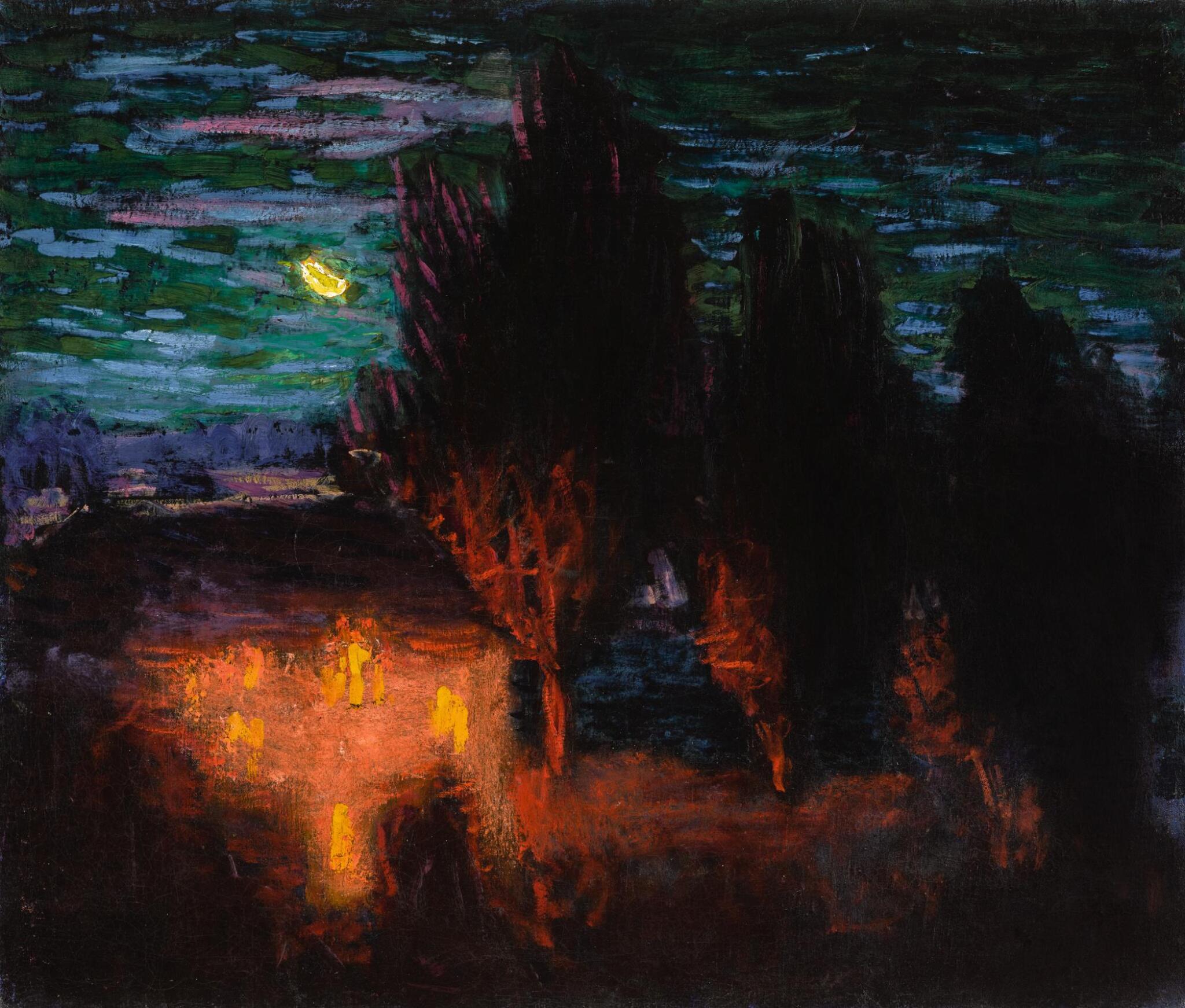 to be sold with a copy of Musée de Pont-Aven, Pont-Aven - O'Conor, 1984 exhibition catalogue and Jonathan Benington, Roderic O'Conor, 1992

Original canvas. The work appears in very good overall condition. Some minor frame abrasions to the lower edge. There is a faint but stable pattern of craquelure, predominantly in lower half of the canvas; only visible upon close inspection.

Ultravioletl light revals an opaque varnish. There are possibly some small retouchings in the sky near left edge; also a possible area in the foliage of the left-hand tree, and possibly a small area in sky upper right.

Held in a gilt plaster frame with a linen inset, ready to hang.

An outline of an upright composition showing a woman seated in profile is visible on the reverse.

The roots of this mysterious painting lie in the nocturnes O’Conor created during his first extended visit to Brittany. Over the summer of 1893, when based at the coastal resort of Le Pouldu, he would sometimes follow the Laïta river upstream from the coast and, as the sun went down, make etchings of groups of wind-blown trees silhouetted against the reflective water. He employed densely hatched lines to convey the loss of detail due to the gathering gloom. He also made paintings exploring similar subjects, for example Landscape with a river (Tate) in which the subject was reduced to dark blocks of colour encircling a body of water, much like the nocturnal shoreline landscapes of Edvard Munch such as Starry Night of 1893 (J. Paul Getty Museum, Los Angeles), which O’Conor could have seen at the Salon de l’Art Nouveau in Paris in 1896.

Just as the transition from day to night and the jagged profiles of trees were characteristics of O’Conor’s river views, so too have they been given a primary role here, albeit without the inclusion of water. The moon has risen behind the curtain of trees, half glimpsed through patches of dark cloud. Although the setting is rural, a house with lights in the windows is visible to the left, the facade of which seems to be illuminated by handheld torches. Shadowy figures overlook the scene, apparently a night-time festivity that shares some compositional affinity with Paul Gauguin's 1891 painting, Upa Upa (Israel Museum, Jerusalem). O’Conor is at more of a remove from the scene he was witnessing, a strategy that allowed him to focus his attention on the luminous, cloud-streaked sky and the row of silhouetted trees.

The wristy, directional brushstrokes in green, blue and red that O'Conor used to paint the sky and the trees in this landscape echo the artist's 'striping' technique of 1892-94, albeit with greater spontaneity. The painting may even have been substantially executed en plein air, until the fading light demanded that the canvas be brought into the studio for completion. Similar painterly gestures in undiluted pigment can be found in O’Conor’s Breton seascapes of 1898-9, suggesting that this work may have been created around the same time.