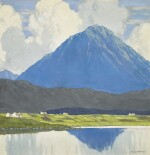 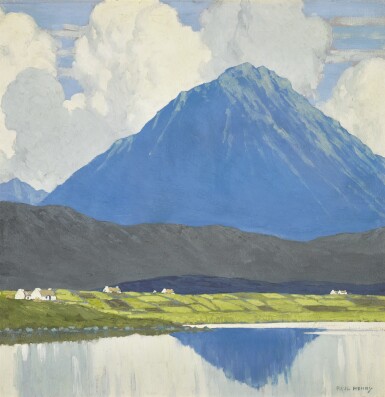 The board appears sound and the work in very good overall condition. A minor, horizontal surface abrasion in the clouds near centre of upper edge. The work has recently had a light clean and is ready to hang.

Ultraviolet light reveals some minor cosmetic retouchings along upper edge, near the centre of the right edge; a small spot in the water near the land's ege in centre of composition and another in lower left corner.

Held in an ebony rippled frame.

The Frederick Gallery, Dublin, where purchased by the present owner in 1998

Lough, land, mountain, sky – Paul Henry’s forcefully simple composition draws the viewer’s eye inwards and upwards, inexorably imparting an onlooker’s feeling of awe before Errigal’s majesty. Rising to a height of 752 metres, the mountain is the highest in county Donegal, its conical shape a prominent feature in the northwest part of the country. Seen here looking north-eastwards across Lough Nacung, Henry probably painted the prospect in August 1929 while staying for a time with his elder brother Bob at McFadden’s Hotel, Gortahork. A prime example of the artist’s architectonic prowess, Henry assembles a compelling visual chiasmus to balance the profound blue weight of the mountain face with its ephemeral reflection, dynamically burgeoning clouds versus the water’s silvery surface, the dense penumbra of the foothills against the vital greens of the patchwork of fields.

Amid this grand, elemental scheme, quintessential rye-thatched white cottages present an intimation of humanity dwarfed by nature. Henry’s vision of a sublime and peaceful rural world, inhabited by a people at ease with their surroundings, would prove enduring. Many of his paintings were the subject of reproductions, including the present work which was recreated as an anonymous a colour print. Another painting from 1929 of the same title, depicting Errigal from a different angle, was replicated as a poster in the following year, and later widely circulated in the Irish Free State Handbook for its powerful national symbolism (Kennedy, 2007, no. 714, p. 245). The archetypal potency of Henry’s landscapes is epitomised by one critic’s reflection in 1930: ‘one feels instinctively that here is the true Ireland’ (Kennedy, op. cit., p. 68).