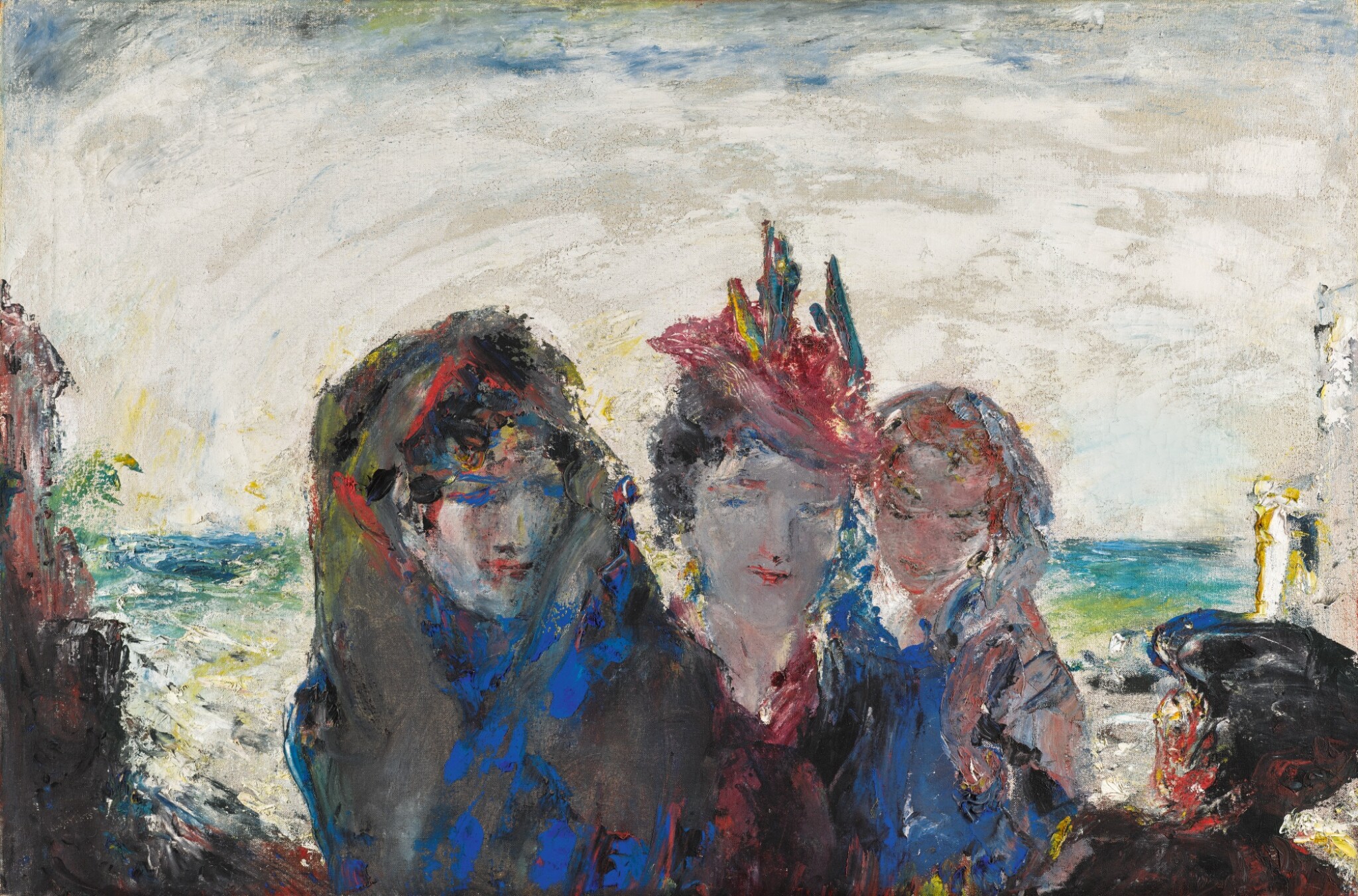 The following condition report has been prepared by Hamish Dewar Ltd:

UNCONDITIONAL AND WITHOUT PREJUDICE

The canvas is unstretched and is evenly and securely attached to what is evidently the artist's original keyed wooden stretcher. The canvas is inscribed on the reverse. There is a pattern of drying craquelure which is very characteristic of Yeats and appears stable.

The paint surface has the artist's characteristically dry appearance.

Inspection under ultraviolet light shows some tiny spots of inpainting in the sky.

Held in a gilt composite frame with museum glass.

Sold by the artist to Miss Katherine Cornell in 1948;

Private collection, by whom gifted to the present owner

A boy peers up at three young women, silhouetted against a view of the sea. The title, A Paris of the West, casts this unlikely character as Paris, the classical hero who was tasked with choosing who was the most beautiful of the goddesses, Hera, Venus and Athena. In the myth Venus, rewarded with a golden apple, was victorious. Yeats is elevating a west of Ireland subject to the realms of antique Greek and Roman mythology in a similar manner to that deployed by John Millington Synge in his controversial dramas. The work is also paying homage to the grand tradition of European painting in its reference to such elevated subject matter but it does so in a deliberately humorous manner. The boy in his peaked cap is a familiar figure from Yeats’s paintings of the 1910s and 1920s, most notably, Bachelor’s Walk, In Memory (1915, on loan to National Gallery of Ireland) and Communicating with Prisoners, (1924, Model, Sligo). He acts as a bystander and observer of the adult world.

The scene takes place in the west of Ireland, on the Sligo coast, probably at Enniscrone or another bathing resort, as suggested by the white building to the right of the composition. This has the castellated form of the Old Cliff Baths on the seafront at Enniscrone. The blue and green of the sea fills the lower section of the background but the vista is dominated by the blue and grey of the blustery sky and the white foam of the waves. The forms of the figures are subsumed within this intense, damp atmosphere. Each of them is distinct in terms of their demeanour, colouring and dress. The shawled figure with dark curly hair and narrow face looks directly at the boy. Her eyes are delineated by opaque blue pigment. Next to her stands a woman wearing a glamorous hat from which two plumes extend into space. Behind her the third figure, with eyes downcast, wears a white scarf over her head and dress of deep blue.

The painting is constructed like a snapshot photograph with a cut-off composition that focuses on the head and shoulders of the four figures. It appears as if each is hurrying along, when momentarily the boy glances back to gaze at the alluring sight of the women. It is likely to be based on an incident that Yeats witnessed and found amusing. It highlights the diversity and excitement of life in such towns. At the same time it creates something monumental and captivating in its juxtaposition of the imposing female figures and the atmospheric prospect of the sea and sky.

The painting was shown at the second Irish Exhibition of Living Art in Dublin in 1944, a new annual exhibition of modern art. It caused some excitement in the media when it was bought by the celebrated American theatre actress, Katharine Connell in 1948. She acquired it from the Victor Waddington Galleries when she was performing in Dublin that year (Irish Examiner, 20 January 1949, p.5.)