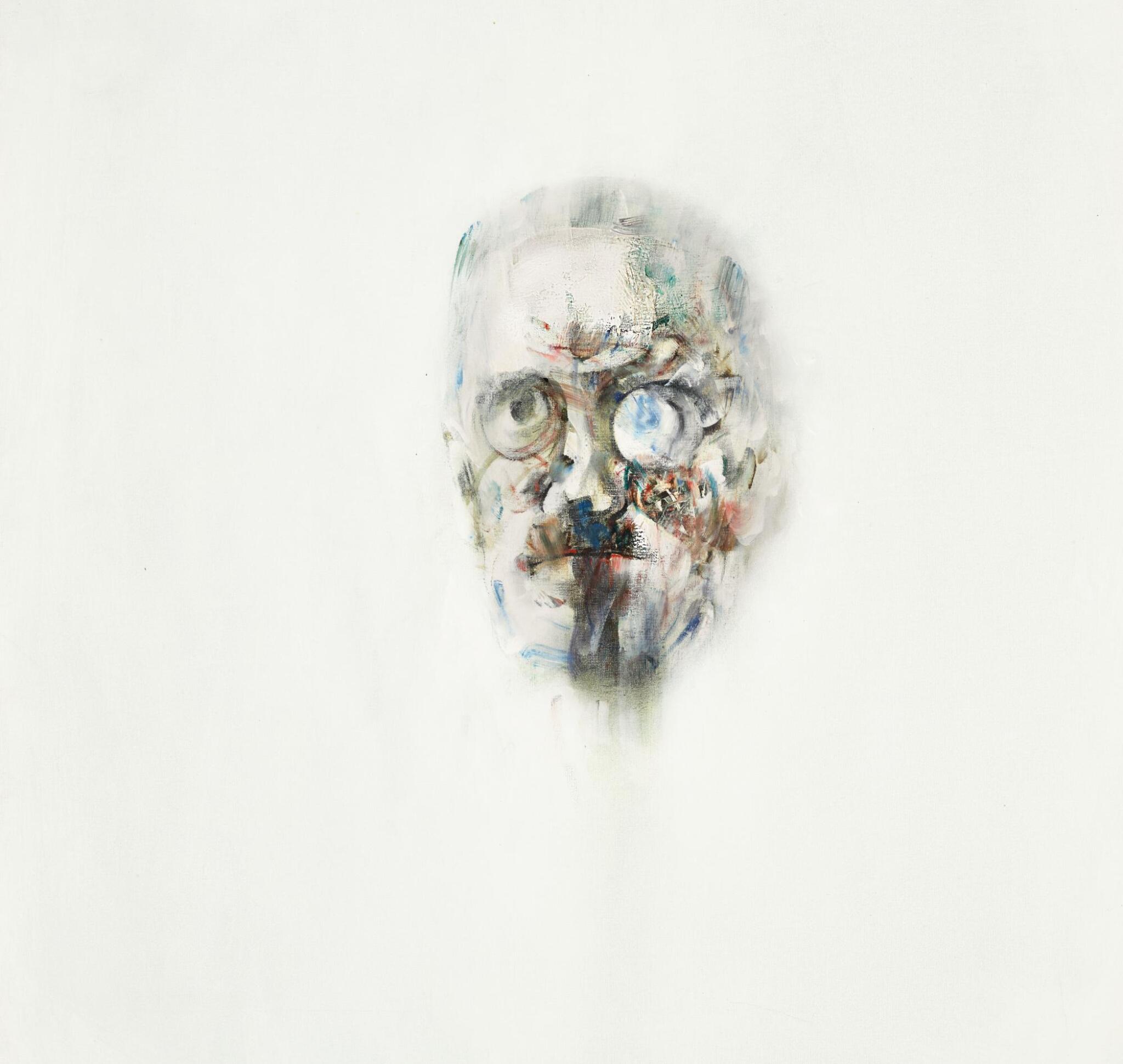 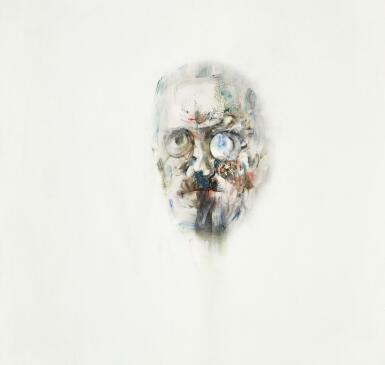 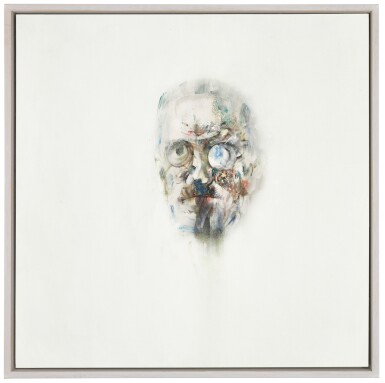 titled, inscribed, signed and dated twice 1977 on the reverse

Original canvas. The work appears in excellent overall condition. A few minor spots of surface dirt to the background, only visible upon close inspection.

Held in typical wooden box frame under glass ready to hang; unexamined out of frame.

'Joyce is the apotheosis, the archetype of our kind and it seems to me that in him – behind the volatile arrangement of his features – lies his unique evocation of that small city, large as life and therefore poignant everywhere.'

A portrait may baldly be defined as a representation of a particular person where the head and its expression are predominant. For Louis le Brocquy, however, the human head assumes a much profounder significance as ‘at once a mask which hides the spirit and a revelation of this spirit.’ (‘The Human Head: Notes on Painting and Awareness’, The eighteenth International Health Lecture, Royal College of Surgeons in Ireland, Dublin, 2005). Far from recording a likeness or phenomenal appearance, portraiture offered him a means to explore consciousness, the human condition – the outer reality of the nexus of lived meanings within. In 1964, following what he described as a ‘blind year’ of bitter dissatisfaction during which he destroyed most of his paintings, le Brocquy had been struck by an epiphany on a visit to the Musée de l’Homme in Paris. Discovering a series of Polynesian skulls, painted and remodelled with clay to reconstitute the human presence, the artist became preoccupied with the idea of the head as a ‘magic box which contained the world of consciousness’ (quoted in Dorothy Walker, Modern Art in Ireland, Dublin, 1997, p.63).

Drawing parallels between these skulls and the ancient sculpted heads found across Europe from Provencal cults to Irish churches, le Brocquy went on to produce a series of anonymous ‘Ancestral Heads’. Partly inspired by a desire to bind his own work to some of the earliest manifestations of art in Ireland, these paintings explore the Celto-Gallic head’s symbolic and ritual powers. But by the mid-1970s, le Brocquy was turning his attention from the ancient to the near-contemporary. Still grasping after the invisible interior world that lies within the human appearance, he embarked on an extensive exploration of the modern artist’s head as an image of human consciousness. In a series of projects representing figures such as Yeats, Joyce, Lorca, Picasso, Bacon, Beckett and Shakespeare, le Brocquy sought to ‘replace the single definitive image by a series of inconclusive images.’ He explains that ‘because of photography and the cinema on the one hand, and psychology on the other, we can no longer regard a human being as a static entity’ (quoted in Louis le Brocquy, Portrait Heads, exh. cat. National Gallery of Ireland, Dublin, 2006, p.13). Portraiture had to be an unending task, a kinetic form, to hope to capture the everchanging landscape of the human face.

To this end Le Brocquy produced no less than 120 studies of Joyce in various media, paying special attention to him as figure whom he felt bound to as a Dubliner and whose writing he deeply admired. Immersing himself in Joyce’s works and studying the contradictory extant photographs of the writer, le Brocquy uses fragmentary strokes and pure white impasto to imbue transitory physical characteristics with a sense of self. In the present work produced in 1977, one recognises the anarchic expression of the down-turned mouth, the furrowed forehead, the startled, unguarded eyes behind the spectacles. Though le Brocquy never knew Joyce personally, he writes with feeling for his image (‘Notes on Painting and Awareness’, op. cit., 2005), of the ‘reverence, compassion and wonder which we all share in face of that unique boat-shaped head – the raised poop of the forehead, the jutting bow of the jaw – within which he made his heroic voyage, his navigatio.’