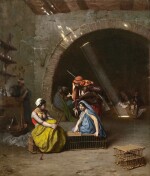 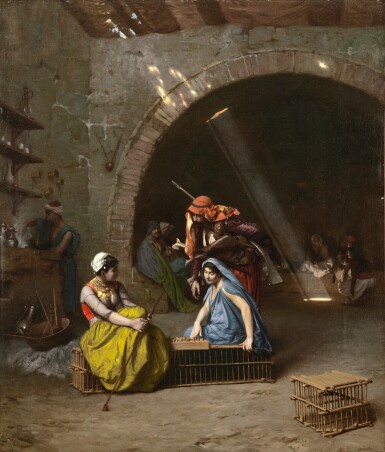 Private Collection, USA, until at least 1904

The Nelson-Atkins Museum of Art, Kansas City (purchased from the above in March 1932)

Schoneman Galleries, New York (purchased from the above in May 1947)

Almeh, from the Arabic ‘learned woman’, was the name of a class of female entertainers in Egypt. Trained in dancing, singing and poetry, almehs (Arabic plural awalim) were present at festivals and entertainments and hired as mourners at funerals. Gérôme's composition Dance of the Almeh (1863, Dayton Art Institute) marked an important early appearance of the type in his oeuvre; he later had the chance to observe and study almeh girls on his visit to the Fayoum oasis in 1868. His travelling companion Paul Lenoir recorded their encounter in his description of their travels published in 1872. They met a group of them at Sinuris and invited the women to join them. Gérôme’s brother-in-law, Albert Goupil, took photographs of them and Gérôme even bargained for items of their clothing to be worn by his models on his return to France. He painted a whole series of pictures of almehs in the next few years, all of them shown wearing the same full silk trousers and diaphanous blouses. Often they were single-figure compositions with the model staring seductively at the viewer. The present work, by contrast, shows two girls playing draughts, as well as a bashi bazouk, an irregular in the Ottoman army posted on duty to Egypt, observing them.

The present work was published as a photogravure by Goupil & Co.