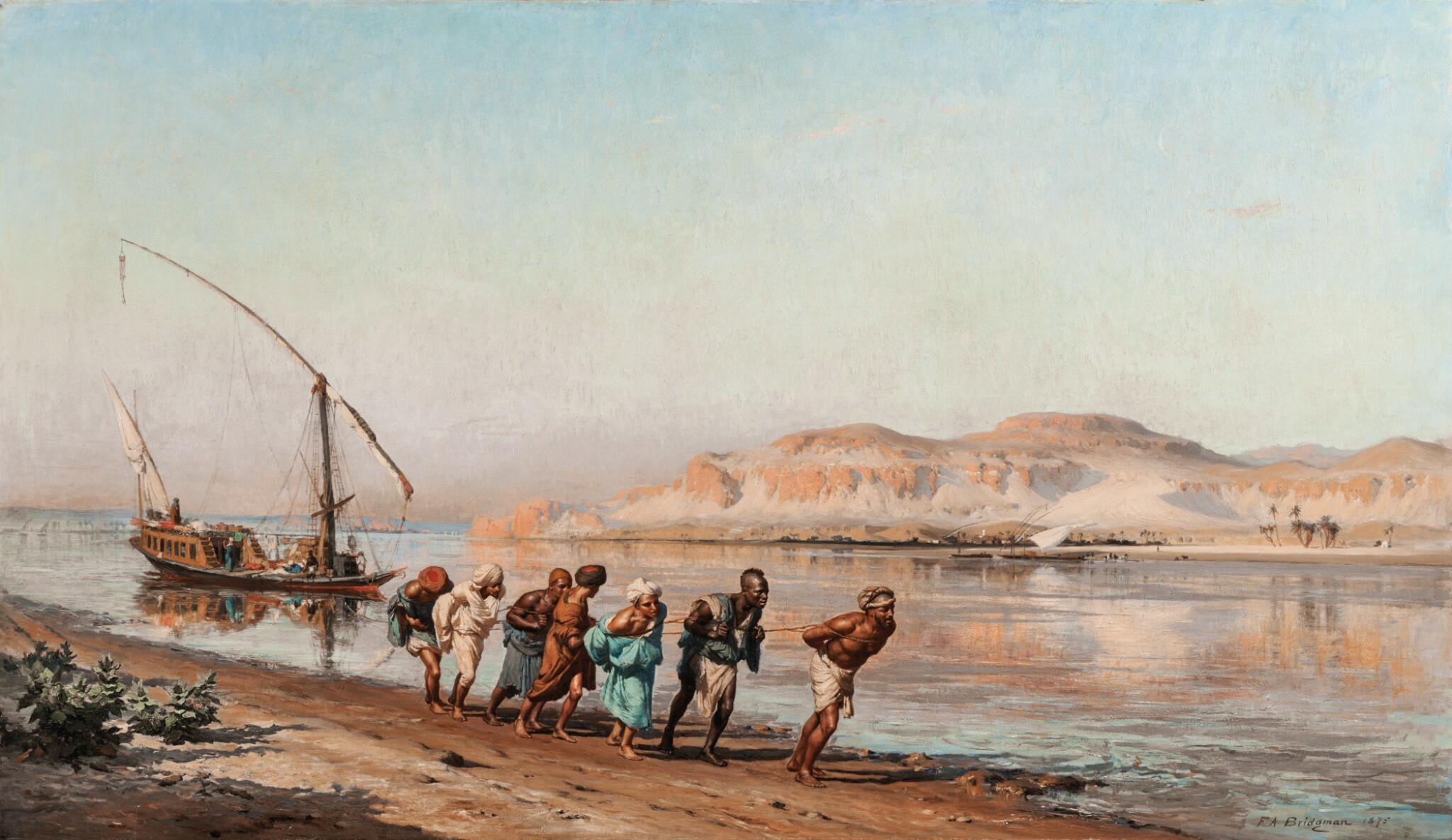 TOWING ON THE NILE

Exhibited by Bridgman at the Royal Academy in 1877, this painting is in a sense an homage to the very lifeblood of Egypt: the Nile. Seven men strain in unison as they haul a dhow upriver on a windless day in the searing heat. In addition to the fascinating observation of the barren hills on the far shore, which brings to mind those same landscapes surrounding the Valley of the Kings at Thebes, this painting is a study in ethnographic types. The men depicted hail from both North and Sub-Saharan Africa. They represent Fellah, Copts, Nubians, and Abyssinians all wearing their respective tribes’ or cultures’ clothes and headdresses. This group symbolises the diverse lands through which the Nile flows, from Lake Victoria in the south through Nubia and into Egypt in the north.

In the winter of 1873, Bridgman set off from Paris to Egypt in the company of fellow American painter Charles Sprague Pearce, a pupil of Léon Bonnat. Arriving in Cairo, the two friends took up residence at the historic Shepheard's Hotel, famous for its grandeur and high society guests. It was here that Bridgman and Pearce were invited by an English couple to join them on a trip along the Nile which took them upstream as far as the temple of Abu Simbel. Bridgman returned to Paris with over three hundred sketches and studies which resulted in major finished compositions including the present work, The Funeral of a Mummy (1876-77), The Diversion of an Assyrian King (1878), and The Procession of the Sacred Bull (1879) (fig. 1). In reviewing the 1877 Royal Academy show, The Times identified Towing the Nile as ‘the best of Mr. F. A. Bridgman’s three Egyptian pictures’.

The subject of men hauling boats or barges found resonance among artists around Europe at this time. Specifically, it presented the ultimate challenge to an artist to prove his abilities at painting the human body under physical duress. In this work Bridgman succeeds by effectively presenting the tension in the men’s muscles and their evocative, realistic expressions.

Interpretations of this kind of scene by other contemporary artists such as Repin and Signorini may well have inspired Bridgman (fig. 2).