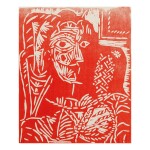 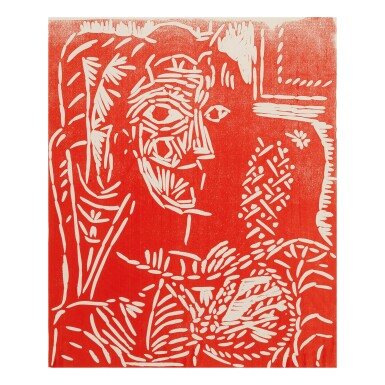 Linoleum cut printed in red, 1958, Baer's A of B, the first state of two of the Deuxième plateau: le Rouge, one of only a few impressions (Baer records only one), on wove paper, stamped in ink 'Imprimerie Arnèra Archives / Non Signé' on the verso, framed

With full margins, the print is in good condition apart from an occasional inconspicuous handling crease or spot of stray ink in the margins. (A small pressure mark in the upper left corner. The verso with stray ink and minor surface soiling.)

When Picasso moved to the south of France in the late 1950s, the distance from Mourlot’s lithographic press in Paris was the primary motivation for him to explore the linoleum cut as a creative outlet. Therefore it is fitting that Jacqueline, whom he had met in the ceramic workshop at Madoura in 1952, be the subject of one of his earliest significant works in the medium, Portrait de Jacqueline au Fauteuil. Like the Portrait de jeune fille, d’après Cranach le Jeune II (see lot 46), the portrait of Jacqueline employs the traditional linocut process of superimposing multiple blocks to achieve the final image. Although this method produced one of his most important and complex linocuts, Picasso found it cumbersome and was frustrated by the registration issues caused by printing from different blocks. This second endeavor in the medium was never published and Baer records at most 16 impressions in total from the five blocks, individually and in combination.

The present lots, the first states of the first, black block and the second, red block, stand alone as powerful compositions, but they are among the last works that Picasso created using the traditional linocut process. Shortly after completing this project, the artist developed the reduction method that allowed him to create a multi-color linocut using just one block and dominated his subsequent work in the medium.