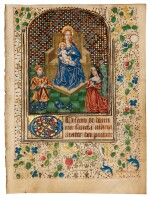 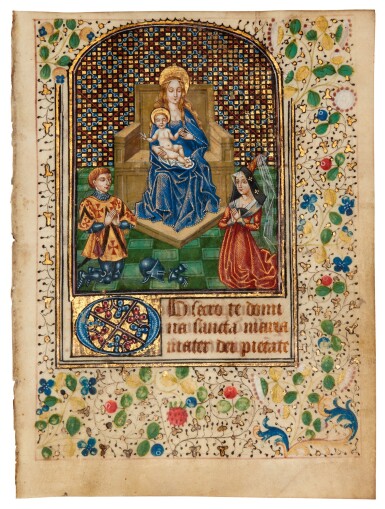 Spanish Forger. A miniature added to a leaf from a C15 Book of Hours, in Latin, late C19 or early C20

Spanish Forger. A miniature added to a leaf from a C15 Book of Hours, in Latin, late C19 or early C20

A miniature added to a leaf from a Book of Hours, in Latin, [France, 15th century; and France (Paris?), late 19th or early 20th century]

Vellum, c.165 x 120mm, a leaf from a mid 15th-century Book of Hours, ruled in red ink for 16 lines of text per page, the ruled space c.97x72mm, written in a fine formal gothic script, with the start of the prayer ‘Obsecro te’, with a full foliate border; a space probably originally left blank filled by the Spanish Forger with a miniature of the Virgin and Child enthroned, adored by a knight in armour with a heraldic surcoat (or, three Maltese crosses gules around a chevron sable), and his wife.

The Spanish Forger often anomalously painted his miniatures on a piece of a 14th-century Italian choirbook – which is one of the ways they reveal themselves to be forgeries – but in the present case he has used a leaf from a genuine Book of Hours, and painted an image perfectly appropriate to the text. Spanish Forger. A miniature added to a leaf from a C15 Book of Hours, in Latin, late C19 or early C20
Lot Closed
Lot 11