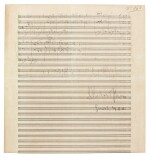 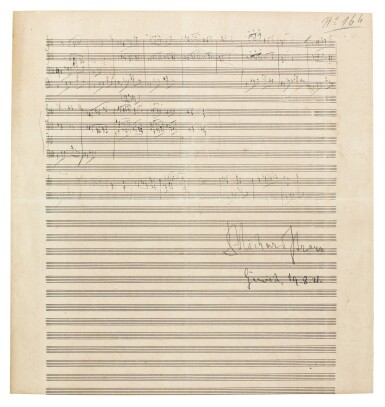 the sketch for Der Bürger als Edelmann comprising 19 bars for the prelude alle Siciliene to Act III, the full score notated in pencil on the recto, with the bar lines pre-drawn in ink, with an autograph inscription (""Schluss des II. Aktes Melodram Jourdain"); on the verso, the sketch for the ballet Schlagobers comprising 21 bars, for the "Tanz des Kaffees" in Act 1, signed and dated by Strauss at the end ("DrRichardStrauss / Garmisch, 19.8.21."), two bars deleted

This sketchleaf has hitherto been unavailable to Strauss scholarship, and its contents are known only imperfectly. Strauss's 1917 musical comedy Der Bürger als Edelmann was the third of four creative engagements of the composer with Molière's play Le Bourgeois gentilhomme. His first, in 1912, provided the play with incidental music and followed it with a through-composed opera seria, Ariadne auf Naxos; 1916 saw the composer replace Molière's play with a through-composed prologue. The work of 1917 reworks the 1912 play, transforming it into a musical comedy. Strauss remained fond of its music, choosing the piece to round off his 85th birthday celebrations in 1949. Further sketch material for Der Bürger als Edelmann is preserved in Vienna and Garmisch.

Strauss's Schlagobers is a ballet in two acts, composed in 1921–22, and first performed at the Vienna State Opera on 9 May 1924. The sketch on the verso of the leaf is for the delightful "Tanz des Kaffees" from Act I.