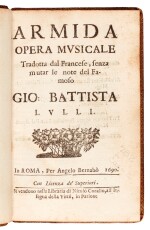 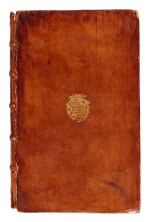 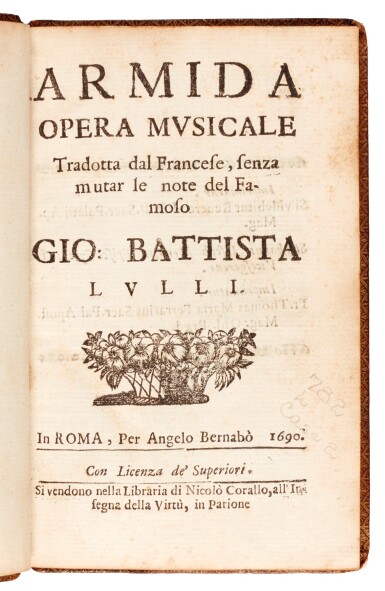 RARE: This is the libretto for the first French opera ever staged in Italy, recorded in a handful of copies in Paris, Rome and Washington. Whilst Italian Opera was exported throughout Europe during the Baroque era, performances of foreign works in Italy were extremely rare. French commentators disputed, seemingly endlessly, the relative merits of French and Italian styles, of which Italians were scarcely even aware, and so the translator's preface is an important source. The Abbé Bertet discusses at length the complexities of adapting French music to Italian metre and the measures he has adopted to solve this problem.  Originally composed for Paris in 1686, Sonneck indicates that this version of Lully's Armide was staged publicly at the Teatro Tordinona, whereas Emmanuel de Coulanges (1633-1716) reported that it was performed privately at the palace of Cardinal de Bouillon, the French ambassador. Lully is named on the title, with the assurance that none of his music has been altered, whereas the original librettist, Philippe Quinault, is not mentioned at all.  The translator is identified by de Coulanges.