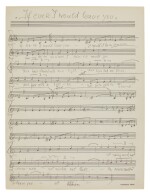 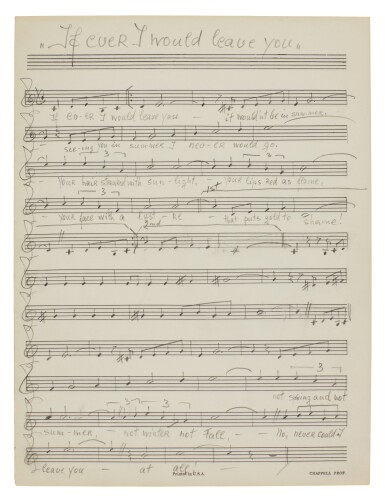 Frederick Loewe. Autograph manuscript of the song 'If ever I would leave you' from "Camelot", 1960s

Frederick Loewe. Autograph manuscript of the song 'If ever I would leave you' from "Camelot", 1960s

a fair copy in pencil comprising the vocal line without accompaniment, written on twelve staves, text for the first verse only, some erasures

If ever I would leave you--it wouldn't be in summer.

seeing you in summer I would never go.

Your hair streaked with sun-light--your lips red as flame,

your face with a lustre--that puts gold to shame!

not spring and not summer--not winter not Fall

No, never leave you--at all!

Camelot was the last great musical that Frederick Loewe created with Alan Jay Lerner, written in 1959 and premiered in Toronto and Boston. It ran for 873 performances on Broadway in 1960, with a cast including Richard Burton, Julie Andrews and Robert Goulet (in the role of Lancelot). The starry world of Camelot became associated with the world of the newly-elected President Kennedy, who much admired the musical. A film version was released in 1967. Frederick Loewe. Autograph manuscript of the song 'If ever I would leave you' from "Camelot", 1960s
Lot Closed
Lot 52