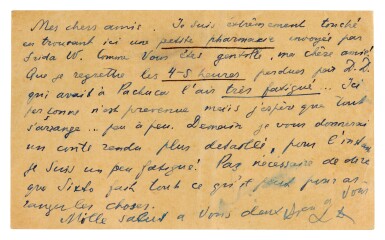 Autograph postcard signed with his initials ("L D"), to Frida Kahlo and Diego Rivera, in French

expressing how touched he was to find some medicine there, noting that no one was informed beforehand [of their arrival], promising to provide a more detailed account the following day, since at the moment he is a little tired ("...Ici personne n'est prévenue mais j'espère que tout s'arrange...peu à peu. Demain je vous donnerai un conte rendu plus detaillé, pour l'instant je suis un peu fatigué...")

After many years in exile and having been formally condemned to death in Moscow, Trotsky was offered asylum by the Mexican government in December 1936. After his arrival in Mexico in January 1937, Trotsky took up residence in the Coyoacan area of Mexico City as guests of the painters Diego Rivera and his wife Frida Kahlo, with whom he had a brief but passionate affair, lasting till about July 1937. By May 1939 the equally promiscuous Rivera had fallen out with Trotsky over politics, and the latter with his wife Natalya moved to a nearby house on Avenida Viena. The following year in August, Trotsky was murdered by Soviet secret agent on Stalin’s orders. Trotsky's initialled signature here ("L D") is after his real name, Lev Davidovich Bronstein.