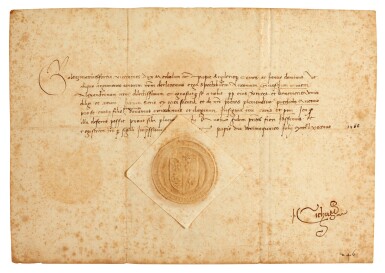 Three documents by ducal scribes, in Italian and Latin, on paper, Pavia, 1468 and Ferrara, 1489, comprising:

(2) Grant in Latin from Galeazzo Maria Sforza (d. 1476), Duke of Milan from 1466 until his death, allowing Antonio Guasco, citizen of Alessandria (south-west of Pavia), and his firstborn son, the right to bear the ducal dog-and-pine impresa (‘donamus, concedimus, et elargimur insignia nostra canis et pini’), dated at Pavia, 14 July 1468. c.415 x 295mm, seven lines of text in a fine semi-cursive Humanistic script, with the Duke of Milan’s heraldic seal in red wax covered by a lozenge of paper, signed ‘Cichugi’ with flourishes; with three horizontal and two vertical folds, some foxing.

Matteo de’ Contugi of Volterra was a famous and highly regarded scribe who worked for Federico da Montefeltro. Simonetta (1410–1480) was an Italian Renaissance statesman.