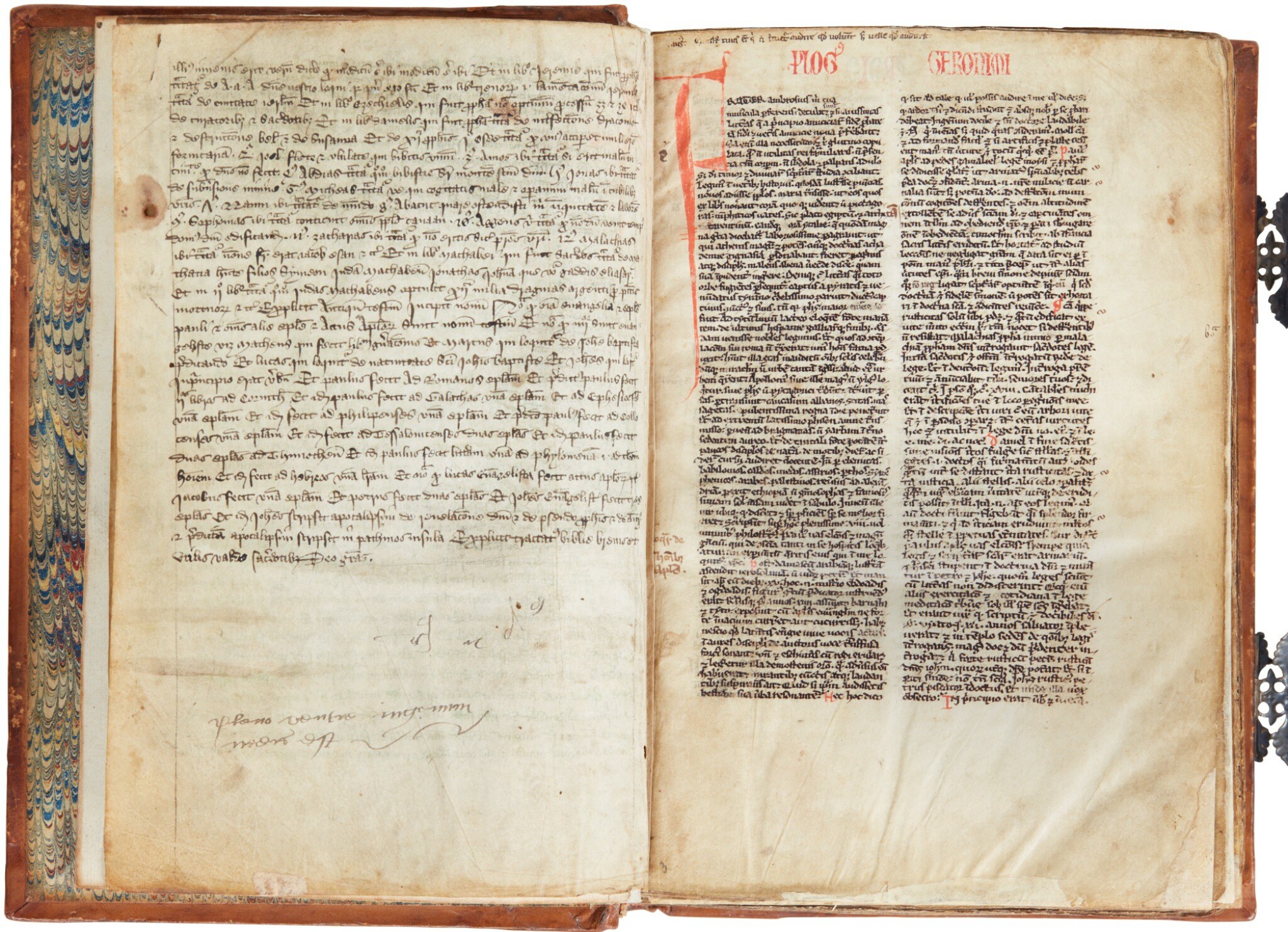 THE BIBLE OF WILLIAM KETYLL

c.220x155mm, vellum, iv+377+vi leaves, prickings and quire signatures and/or catchwords often survive (suggesting that the outer and lower margins have not been significantly cropped), written above top line in 2 columns of 45–59 lines by several scribes, the written space c.160x100mm, with changes at ff.75, 149, 155, 203, 244, 316v, 388, plain red initials; the parchment generally of mediocre quality, with numerous natural flaws, Exodus 38:2–Leviticus 21:21 missing after f.28; part of the prologue to I Chronicles, and I Chronicles 1–10:3 missing after f.99; ending imperfectly at Revelation 22:1; 19th-century binding of pale brown leather over wooden boards with remains of 18th-century spine laid on, two metal clasps

(1) Annotated in the margins and on the flyleaves by several 13th-, 14th-, and 15th-century readers. (2) WILLIAM KETYLL (d.1485): pledged by him from 1452 until at least 1458 in the Chichester Chest at Oxford. (3) Inscribed with late 15th- and 16th-century names, ‘Robertus Lynford’ and ‘William Norriche’ (f.264r). (4) John Buddle, by descent to his great-great nephew: (5) Frank Buddle Atkinson (1866–1953), of Godalming, with his bookplate, sold by him in our rooms, 29 November 1949, lot 1, bought by Walford for £110, for the church of St Mary at the Walls, Colchester, where William Ketyll was rector from 1468 to 1476. In 1978 the parish was combined with Christ Church, Colchester, the present owner, and St Mary’s was made redundant; proceeds from the sale of the Bible will be used for the purposes of mission and ministry in the parish and in particular for the encouragement of biblical literacy and knowledge.

This volume displays evidence of a very unusual production process; it would repay detailed study. Although not a ‘professional’ book in outward appearance, it must have been written somewhere where the work could be divided between several scribes, and they have left some clues to the unusual way in which they collaborated. For example, Psalms starts on a new quire, of 8 leaves, at the end of which is a note referring to ‘ex viii foliis … usque ad salvum me’ (f.148v); this is followed by a quire of six leaves, by a different scribe, with part of the last verso left blank; and then a third scribe writes the next quire, which starts at Psalms 68, whose incipit is ‘Salvum me …’ (f.155r).

There is also considerable evidence for the way in which the text was studied: the margins abound in varying systems of numbering, in roman and medieval arabic numerals, as well as notes, maniculae, and cross-references.

The books are in a very eccentric order: they are in the standard ‘Paris’ sequence as far as Nehemiah, but followed by I–II Maccabees, Esther, Tobit, Judith, Psalms (in Gallican and Hebraicum parallel versions, followed by Psalm 151); the six ferial canticles in two parallel versions; Isaiah, Lamentations, Baruch 1–5, Jeremiah; Lamentations and Baruch 1–5 repeated; Daniel, the Minor Prophets, Job, Proverbs, Ecclesiastes, Song of Songs, Wisdom, Ecclesiasticus, Baruch 6, Esther 10:4–13 and 11–16; the Gospels, with Mark repeated after Luke; the Catholic Epistles, Acts, Pauline Epistles, and Apocalypse. The medieval flyleaves have various notes.

Medieval Oxford and Cambridge had a system for providing interest-free loans to members of the university: an endowment would be provided to pay for a lockable chest and a sum of cash, which could be borrowed in exchange for collateral such as a manuscript or silverware, locked in the chest until it was redeemed by the repayment of the loan. A flyleaf of this Bible is inscribed with a valuation of 20 shillings and the monogram of the stationer of Oxford University, John Dolle (f.376v), below which there is a pledge (‘caucio’) note recording that in 1452 William Ketyll deposited the Bible in exchange for a loan of 14s.; this is followed by six more similar notes recording repayments of the loan in installments of about 1s. 8d. each. Such notes are rare. Most of those that survive record a single loan, and were thoroughly erased or effaced on redemption: it is extraordinarily rare (unique?) to find a series of seven such notes, none erased, all still legible.