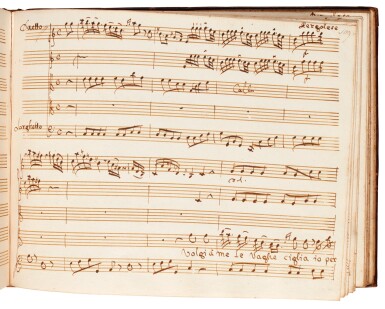 containing 40 arias by Hasse ("Il Sassone") and 12 numbers by Pergolesi (including a duetto and a terzetto), the score notated for solo soprano, alto and tenor voices, with strings and continuo, some arias with parts for oboes, horns ("corni di caccia"), violetta etc, written by about fifteen hands (one copying 16 numbers by both composers) in brown ink on systems of up to seven staves per page, some singers named (Faustina Bordoni, Francesco Polve, An[na] Maria Mazzoni, Farinelli, Caffarello, Vittoria Tesi, Anna Maria Peruzzi, Filippo Giorgi, Lucia Fachinella and Gioacchino Conti); including arias from Hasse's early operas Issipile (8), Siroe (13), Alessandro nell'Indie, Attalo, Ulderico, Demetrio, Cajo Fabricio and Catone in Utica, and from Pergolesi's operas Il prigioniero superbo (8) and Lo frate 'nnamorato (in Neapolitan dialect) and others

3 volumes, c.220, 250 and 160 pages, oblong 4to (c.21 x 26.5cm), blanks at the end of gatherings, various 10-stave papers, many with Neapolitan watermarks (including a horse in a circle: cf Heawood 2795 & 2797; Shearon no.5), probably Naples, 1730s, contemporary British calf, gilt arms of Alexander Hume-Campbell, Earl of Marchmont to covers, spines gilt in compartments ("Arie del Sassone" etc), engraved armorial bookplates ("The Honble George Baillie Esqr, one of the Lords of the Treasury 1724."), some numbers cropped by the binder, one aria misbound with the first four leaves at the end of the volume,

THE ARIAS BY HASSE ARE UNPUBLISHED. We have no record of a comparable collection of early eighteenth-century Italian opera appearing at auction.

This is a fine anthology of around fifty separate Italian manuscripts, all apparently collected in the 1730s, and bound together by an English or Scottish binder of the period. Certain scribes and papers are common to the music of both Hasse and Pergolesi, and many of the pieces were first performed in Naples, where the Baillies lived during the early 1730s. By then, Pergolesi (1710-1736) was arguably Italy's most celebrated composer and eight of the arias in the volume devoted to him come from the opera Il progioniero superbo, first given at the Teatro San Benedetto, Naples, in 1733 (it was staged with the intermezzo La serva padrona).

J.A. Hasse (1699-1783), first made his name in Naples during the 1720s, before becoming Kapellmeister at Dresden in 1731. This manuscript contains arias from his early operas for Naples, Bologna and Venice written between 1728 and 1736. There does not appear to be any complete surviving manuscript of Issipile, as originally written for Naples in 1732, the principal source being fourteen arias in the Santini collection at Münster (Ms.1980, which however does not include two arias present here). The nine arias here bear the names of the singers for the premiere at the Teatro San Benedetto; likewise the thirteen from Siroe (including 'Mi lagnerò tacendo') bear those for the premiere at Bologna in 1733. Of these early operas only the autographs of Siroe, Tigrane and Cajo Fabricio survive complete. Arias from Siroe were published in vocal score in London in 1736, but in the main these operas circulated in contemporary copies, in some cases incompletely (a few facsimiles have been published: Siroe in 1977 and Demetrio in 2014). Other concordances for the separate arias have also been traced, mainly in Münster, the British Library and Montecassino.

Alexander Hume-Campbell, 2nd Earl of Marchmont (1675-1740, see British Armorial Bindings, Stamp no.1 to covers)--perhaps first acquired by his sister Lady Grizell (née Hume, 1665-1746), wife of George Baillie, of Jerviswood (1664-1738), with his bookplate--thence presumably to their daughter Rachel (1696-1773), who married Charles Hamilton (1697–1732), son and heir to Thomas, 6th Earl of Haddington.  Lady Grizell, George, Rachel and Charles were resident in Naples during 1731-1733, seeking to mitigate Charles's suffering from tuberculosis.

Books from the Library of the Earls of Haddington
Hasse and Pergolesi. Collection of eighteenth-century Italian manuscripts of opera arias, in three volumes, 1730s
Lot Closed
Lot 50