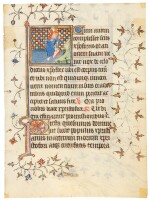 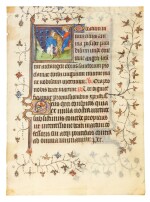 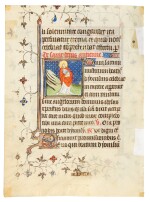 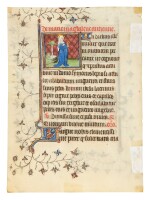 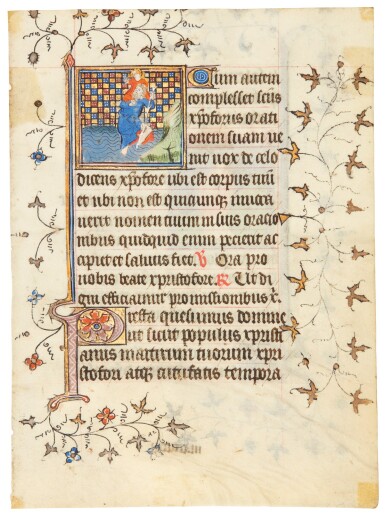 Four small miniatures on two leaves from a Book of Hours [France, Brittany or Normandy, c.1420]

Four small miniatures on two leaves from a Book of Hours [France, Brittany or Normandy, c.1420]

Property from the Collection of Stanley J. Seeger

Four small miniatures on two leaves from a Book of Hours,

in Latin with rubrics in French, [France, Brittany or Normandy, c.1420]

Several surviving leaves from the same manuscript include large miniatures by the Mazarine Master, including four formerly in the Korner collection, sold in our rooms, 19 June 1990, lots 21-24. Additional sister-leaves from the suffrages include small miniatures in a style characteristic for Brittany or perhaps Normandy and include two leaves from a New York collection sold in our rooms, 21 June 1994, lot 26, bought by Maggs (their Catalogue 1222, 1996, nos. 2–3, with col.pls.) and one bought from Korner by Rosy Schilling and sold after her death in our rooms, 5 December 1994, lot 24.