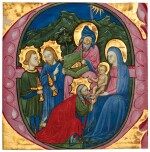 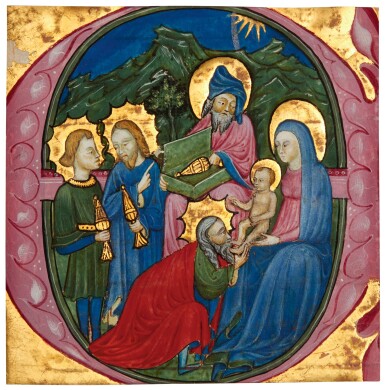 Adoration of the Magi, 15th Century

Adoration of the Magi, 15th Century

ADORATION OF THE MAGI, 15TH CENTURY

The Adoration of the Magi, illuminated cutting from a Gradual in Latin [Northern Italy (Lombardy?), c. 1460]

Vellum, a cutting with a historiated initial ‘E’, c.120x120mm, probably introducing ‘Ecce advenit dominator dominus …’ for the feast of Epiphany in a Gradual, the reverse with music in square notation on four-line red staves, their rastrum c.40mm, and a trace of text ‘[…]no’; the scene is set before a mountainous landscape, the eldest magus kneeling to kiss the infant’s feet, the second magus pointing to the Star of Bethlehem and conversing with the youngest, and Joseph placing the first gift in a coffer; with some rubbing and minor flaking of gold, the upper edge of the initial slightly cropped, but generally in fine condition; framed and glazed (c.155x145mm).

The initial is remarkable for its iconography for at least four reasons. The Three Magi do not usually have haloes (which are here distinguished by their scalloped edges); their gifts are not usually depicted uniformly; the scene is not usually set before a landscape, with no indication of the stable; and we have been able to find no other example in which St Joseph is apparently placing the gifts in a box for safe-keeping.

The figures’ flesh is distinctively modelled, with green and buff, and they are set against a jagged landscape modelled with agitated black and white strokes; the eldest magus’s cloak stands out both for its bright red colour and it fine modelling; the style is close to that of the Maestro dei corali di San Michele a Pavia, and related to the choirbooks of San Sisto, Picenza, as Anna Melograni kindly informs us, suggesting an origin in southern Lombardy, or perhaps northern Emilia-Romagna.

Mrs M. Lambarde, sold anonymously at Sotheby’s, 24–25 January 1949, lot 289 (the reverse of the frame with a clipping from the catalogue), bought for £8 by John B. Penfold, for Jean Poultney (whom he married the following year); by descent to the present owner.