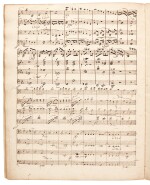 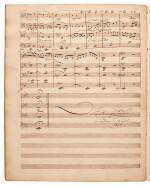 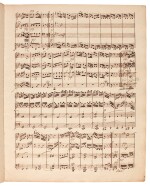 F. Mendelssohn. Manuscript of the String Quartet in E-flat op.12, with additions and corrections by the composer, 1829

F. Mendelssohn. Manuscript of the String Quartet in E-flat op.12, with additions and corrections by the composer, 1829

Manuscript of the String Quartet in E-flat major op.12, WITH ADDITIONS AND CORRECTIONS BY THE COMPOSER, signed and dated ("Felix Mendelssohn Bartholdy"), 1830

titled "Quartetto (an B.P.)" above the music, notated in dark brown ink for string quartet on four systems per page, with one section of twenty-five bars in the first movement entirely in the hand of the composer, a few alterations and markings also by him, and many corrections, emendations and performance markings in pencil in another hand, some possibly by Ferdinand David, signed and dated by the composer at the end ("...London d. 14 Sept 1829"), being the date of composition rather than the date of the manuscript

This is an important contemporary manuscript of Mendelssohn's early String Quartet op.12, formerly owned by the violinist Ferdinand David (1810-1873). The piece features a characteristically Mendelssohnian scherzo movement beginning in G minor ('Canzonetta'), recalling the early Octet and the Midsummer Night's Dream music. His most striking achievement is the convincing cyclical form. Mendelssohn does not merely introduce the opening theme from the first movement into the finale, he closes the entire work with the extended coda (over fifty bars) in E-flat that he had used to close the first movement. This is a particularly satisfying conclusion, given that up to that point the finale been a saltarello-like movement in the relative minor keys of C minor, F minor and G minor.

The manuscript incorporates Mendelssohn's revisions and corrections to the original draft found in his composing manuscript (now in the Bibliothèque Nationale, Paris) and accords more closely with the first edition published in parts by Hofmeister of Leipzig in 1830. In particular, the twenty-five-bar autograph passage in the first movement (the lead into the coda mentioned above) replaces thirty-four bars found crossed-out in the Paris autograph. This suggests that the present manuscript was written very shortly after the autograph, during which time the composer realized that the original version needed replacing and asked the copyist to leave a shorter space where he could write in his revision (as indeed it appears in the first edition).  However, some of the tempo markings in ink differ from the printed parts: for example the opening 'Allegro non tardante' is given as "Allegro non Andante", and the slow movement 'Canzonetta' is marked "Allegretto con moto" (revised to "Scherzando con moto" in pencil). There are also many tempo and dynamic markings in pencil that are additional to, or differ from, the edition, and alterations to the chords at the end of the slow movement.

The title above the music "Quartetto (an B.P.)" also appears in Mendelssohn's autograph manuscript in Paris, indicating his dedication of the work to Betty Pistor, the singer at the Singakademie and friend to his sisters. He was then enamoured of Betty and told his family (letter of 18-22 September 1829) that "Das Quartett an B.P." was ready for her, and referred to it as hers again in 1831. However Betty was unaware of Mendelssohn's dedication until much later, since it did not appear in the first edition (1830). Sometime in January 1830 the manuscript was delivered by the violinist Kudelsky to Mendelssohn's friend the violinist Ferdinand David in Dorpat (now Tartu, Estonia). David frequently played chamber music with Mendelssohn and became the leading Concertmaster in Leipzig, where he premiered Mendelssohn's Violin Concerto in 1845. It was not until 1859, when David met Ernst Rudorff and Betty finally received the score as a gift from the violinist, that she realized that the piece had always been dedicated to her. See Lot 58 for a letter in which Mendelssohn discusses the dedication of the quartet to Betty Pistor. F. Mendelssohn. Manuscript of the String Quartet in E-flat op.12, with additions and corrections by the composer, 1829
Lot Closed
Lot 57