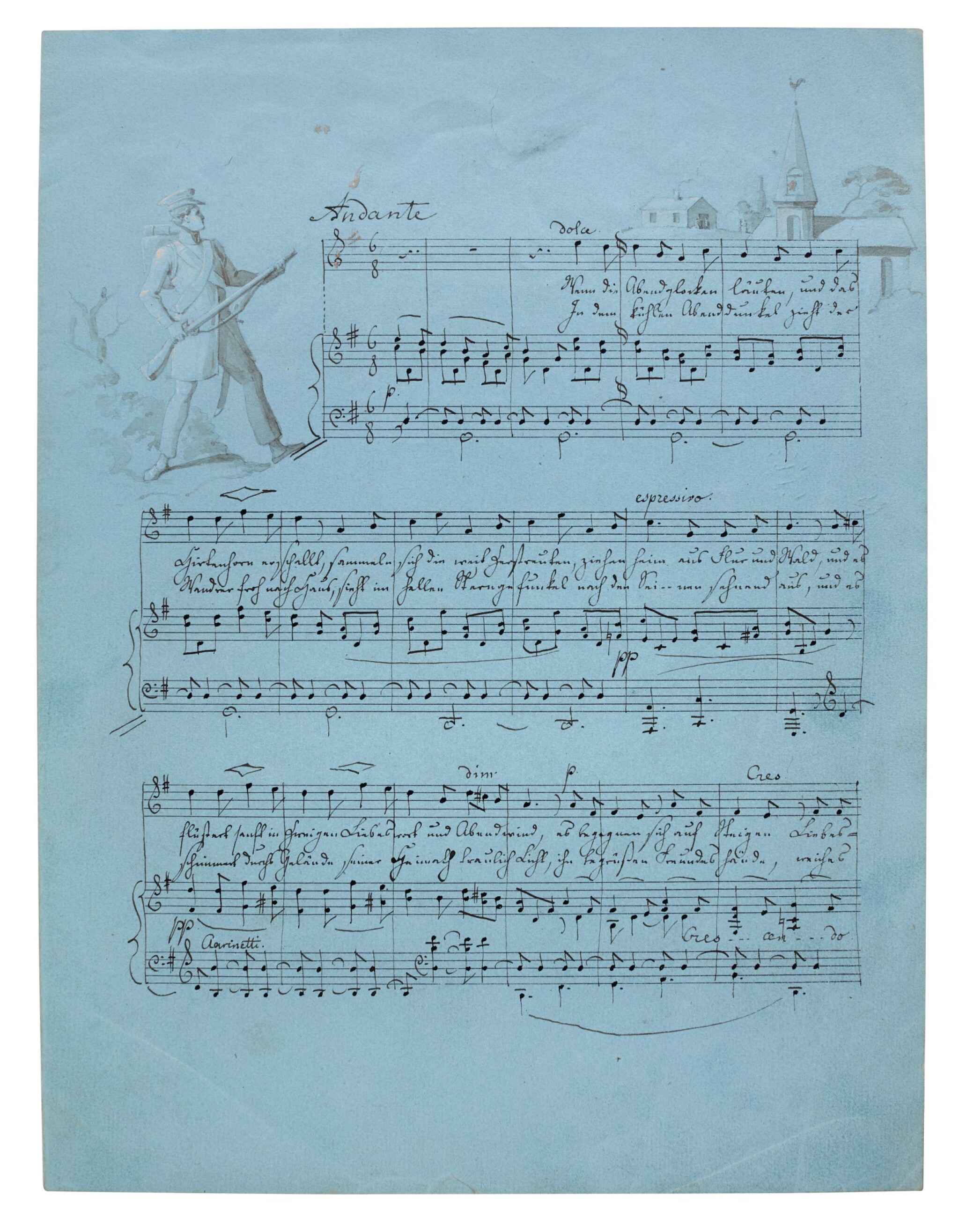 notated in black ink for voice and piano on three 3-stave systems per page, in black ink on blue paper, with some differences in the piano accompaniment from his own arrangement for the published vocal score (mainly at the reprise of the Andante), with many tempo and expression markings, especially for the singer, which are not in the editions ("dolce", "ritard...", "crescendo", "dimin", ) some indications of the original orchestration ("Clarinetti", "Flauti", "viole"); with, at the head of the first page, above the music, a drawing of the protagonist Hermann, dressed as a soldier and armed with a rifle, guarding his home town, executed in grey-brown washes and white highlighting

6 pages, 4to (c.28.5 x 21.5), a bifolio and a single sheet, 9-stave paper, dated by the composer at the end "Berlin den 14 Januar 1830", loosely held in a card mount, inscribed in later hands, including the attribution of the illustrations to Hensel, a few light creases

Mendelssohn has arranged this song from his privately-performed Singspiel (or Liederspiel), then known as "Aus der Fremde" (1829). This song is no.5 in the Liederspiel, sung by the main protagonist, Hermann (tenor), who has returned from the wars to confound an unscrupulous imposter that is attempting to steal his inheritance and his sweetheart Lisbeth (ie "Betty"?). Hermann is portrayed standing on guard outside the town ("...doch der Soldat drauss im weiten Feld ist ‘gen Feind als Schildwach gestellt..."). Mendelssohn composed the Liederspiel during September to December 1829 for his parents' Silver Wedding celebrations, where it was performed privately. The music was not published until it was staged publicly in 1851, as Heimkehr aus dem Fremde, and in London as Son and Stranger. The words are by Carl Klingemann.

Given by Mendelssohn to Dorothea Elisabeth ("Betty") Pistor (1808-1887) on the occasion of her 22nd birthday, according to a later inscription on the mount. Betty was born in Berlin and studied with Carl Zelter, singing in the select Friday group from the Singakademie which Mendelssohn accompanied at the piano. She was also a close friend of his sisters Fanny and Rebekah Mendelssohn.