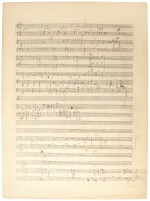 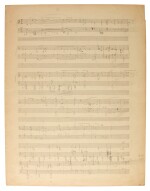 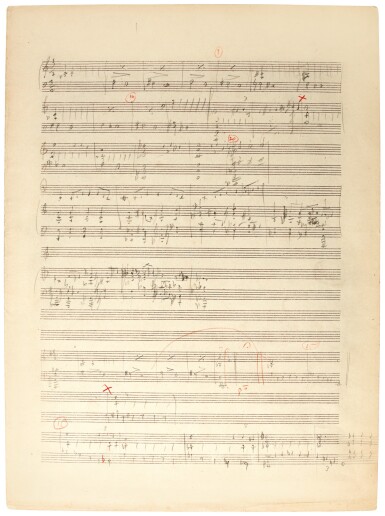 F. Delius. Collection of autograph working drafts for an unknown set of piano pieces, and other works, c.1920

F. Delius. Collection of autograph working drafts for an unknown set of piano pieces, and other works, c.1920

1)  A bifolio, marked "1", containing sketches by Frederick Delius [cf no. I in the fair copy below (8)], notated in pencil for piano on eight systems, with revisions and deletions, cues in orange crayon, apparently completed on the sixth system, together with sketches in 12/8 metre, possibly intended for the Cello Concerto, 3 pages, 20-stave paper ("A.L.No.14");

2) A bifolio, marked "2" containing sketches by Frederick Delius, [cf no. II in the fair copy below], heavily revised by him, beginning in 5/4 metre, the first 30 bars as in the fair copy, and on the second leaf, drafts possibly for the Third Violin Sonata, mainly in 4/4, some crossed through, 4 pages, unmarked 12-stave paper--

3) A bifolio, containing an incomplete working draft [cf no. III in the fair copy], diverging from it from bar 10, possibly in Delius's hand, twenty-one bars in all, followed by part of an arrangement of "The Song of The High Hills", in another hand, dated "Dec 13. 1923", 3 pages, unmarked 14 stave paper--4) a single leaf, comprising three working drafts [cf no. III], continuing the music of 3) from bar 10 for five bars [cf no. III], and two others for the same piece, comprising seventeen bars music in all, 2 pages, unmarked 12-stave paper, with an earlier incipit for a violin sonata in ink--5) A folio leaf, marked "3", containing a sketch in the hand of Jelka Delius [cf no. III], and dated "15.11.23" by her, comprising 12 bars (2 bars longer than the fair copy), 1 page, 12-stave paper, notated on a sheet also including a viola part notated in ink in B-flat minor, 15 November 1923

7) A folio leaf, containing sketches for two pieces: titled "Waltz" [cf no V], an early version of about 30 bars, with many deletions, cues, and markings in orange crayon--and "6" [cf no. VI] , apparently complete, 2 pages, 20-stave paper,

The sketches for these piano pieces (about 15 pages in all) do not come from any known work by Delius, but would appear to be contemporary with the Cello Concerto and the Third Violin Sonata. The style of piano writing is similar to some of Delius’s other late works, notably the 3 Preludes for Piano (RT IX/8), the Third Violin Sonata (c.1930: RT VIII/10) and his Henley setting ‘A Late Lark’. The first piece contains a number of harmonic progressions that are characteristic of Delius’s later music, including the original version of the quartet movement 'Late Swallows' (see lot 43); the second number resembles the tone and layout of the second subject of the Second Violin Sonata (1924); and the draft piece in running quavers is consistent with his piano writing in the Third Sonata. The paper used by Delius in the first bifolio (1) he also used in the "Tanz für Harpsichord" RT IX/6, dated 1919. The numbering of the pieces could be in Delius's hand, although there is no other proof that he actually intended to group them into a set of six pieces. Sotheby's is grateful for the assistance of Dr Daniel Grimley in our cataloguing of this lot.