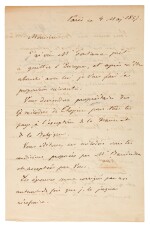 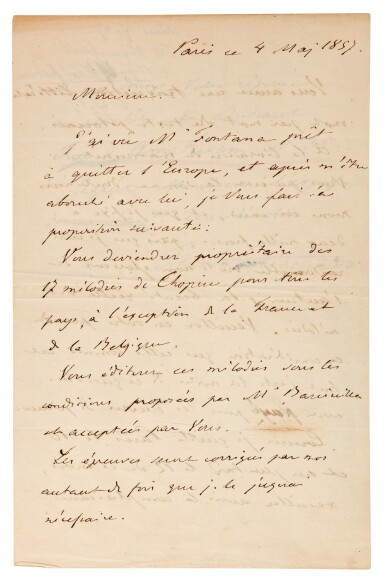 [Chopin, Fréderic]--Letter by Titus Woyciechowski about the publication of Chopin's Polish Songs op.74, 1857

[Chopin, Fréderic]--Letter by Titus Woyciechowski about the publication of Chopin's Polish Songs op.74, 1857

Important autograph letter signed ("Titus Woyciechowski"), about the publication of the Polish Songs op.74, 4 May 1857

written in French, [to Heinrich Schlesinger in Berlin], arranging for the publication of the "17 mélodies de Chopin", having discussed the matter with Julian Fontana, in which he concedes the rights throughout Europe except France and Belgium, under the terms agreed with Chopin's younger sister Izabella Barcinska, promising to provide a word-for word translation of the Polish words, asking two thousand francs payable on receipt of the manuscript, which he considers reasonable given that it is only about half what Schlesinger paid for the piano works, and demanding the right to correct as many proofs as necessary ("...Veuillez en outre prendre en considération que cette somme est tout juste la moitié de ce que vous avez payé pour les oeuvres de piano...").

Julian Fontana, who had been Chopin's factotum in Paris, arranged the posthumous publication by Schlesinger of twenty-one piano pieces in 1855 (opp.66-73), but left for America before finalizing the seventeen songs. It was left to Titus Woyciechowski to help Chopin's only remaining sister, Izabella Barcinska (1811-1881), negotiate with the Berlin publisher. In his reply, Schlesinger offered only one thousand francs, pointing out that he had nothing by which to judge Chopin's vocal writing. Izabella accepted his proposition in a letter of 24 June and sixteen songs were eventually published in 1859: the 16 Polnische Lieder op. 74 in separate Polish and German editions. The seventeenth song was added to the edition only in 1872.  Titus had been one of Chopin's closest friends in Warsaw and the recipient of some highly impassioned letters from the young composer.

For autograph letters by Chopin and other composers, please see our sale in Paris, 18 November 2019, and the advertisement at the back of this catalogue.