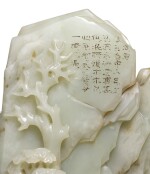 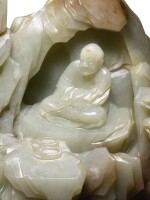 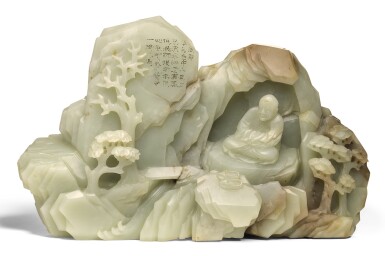 PROPERTY FROM AN ASIAN PRIVATE COLLECTION

deeply carved to the front with a luohan seated in a meditative position on a ledge within a deep grotto with his shoes placed on a flat rock before him, framed by gnarled tree trunks and jagged rockwork, with a small bridge traversing a rushing stream amidst the rocks, a rock-face towering above incised with an excerpt from a prose by Qianlong describing said luohan, the reverse decorated with trees and further vegetation, the polished stone a pale celadon tone with mottled russet patches

The pine tree on the right of the reverse possibly has a chip to one stem hidden under the leaves. There is also expected wear to the gilt decoration of the inscription. The actual colour is of a more pale celadon tone than the catalogue illustration.

This boulder is boldly carved deep relief with Vanavasin, one of the sixteen luohan. A Buddhist monk, whose name in Sanskrit means ‘rain’, Vanavasin is said to have reached enlightenment under a plantain tree. In the 18th century depictions of luohan, close disciples of the Historical Buddha Shakyamuni, were very popular. Their distinctive iconography, each with exaggerated, almost grotesque features, originated with an influential rendition of each luohan by the famous late Tang (618-907) and Five Dynasties (907-960) monk and painter Guanxiu (823-912), who saw them appear this way in a dream. The Qianlong emperor, who saw these paintings during a tour to southern China, composed eulogies to each luohan.