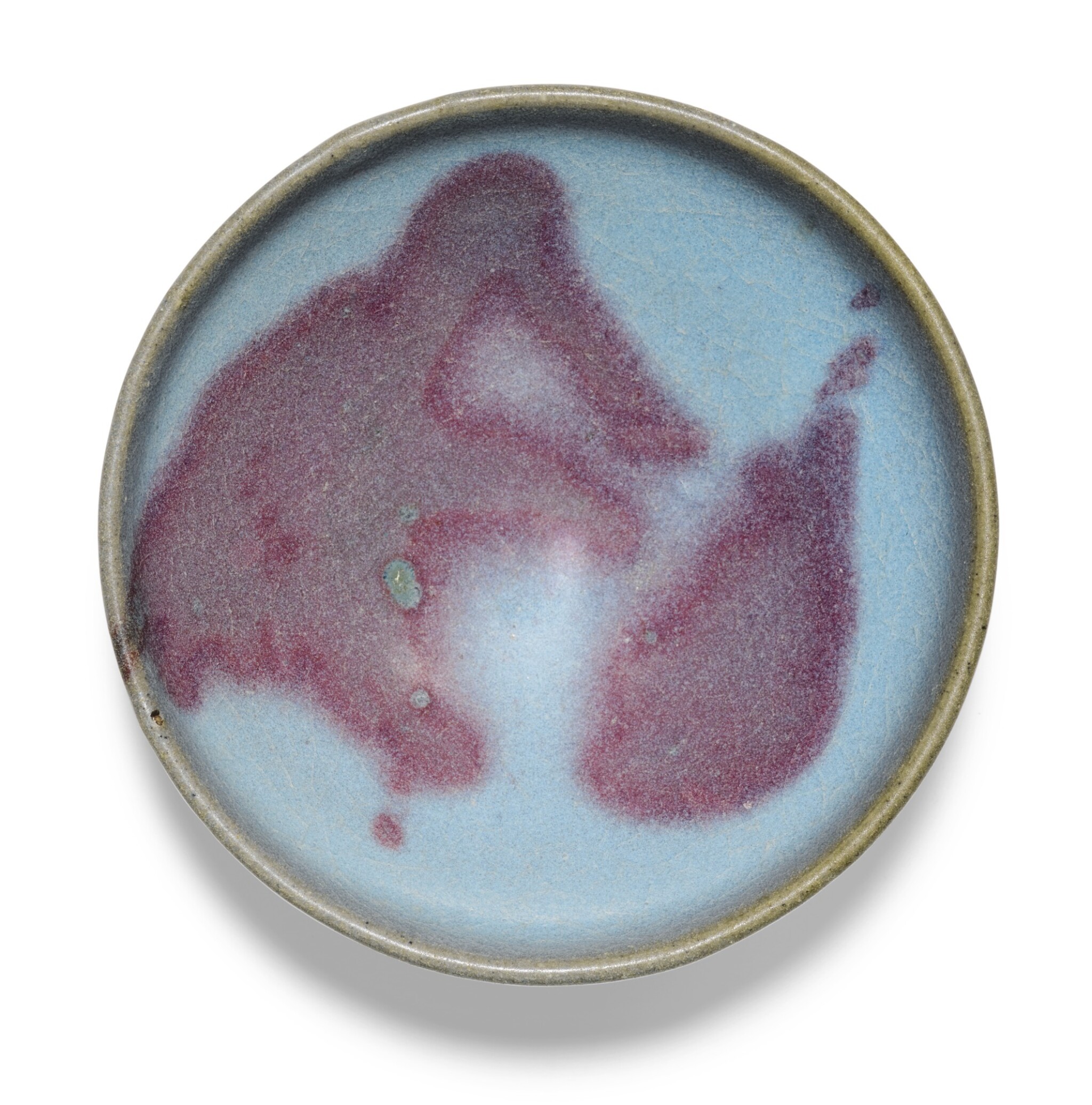 the well potted rounded sides rising to a gently incurved rim, liberally applied to the interior with a large splash transferring from a lavender tone to a rich purplish-red tone, covered overall with a pale-blue glaze suffused with a matrix of pale crackles thinning to a buff tone at the rim and stopping just above the neatly-cut foot

The bowl has some minor glaze firing imperfections including three burst bubbles just below the rim of the exterior (the largest 3mm., diam.)and one on the rim to the interior, minor rim fritting, iron-spots and some minor glaze pulls around the footring..

Purple-splashed 'Jun' wares are remarkable for their splendid colouration, which display a range of blue and lavender tones. The red derives from a copper-rich pigment brushed to the blue glaze, which is difficult to control in the firing and thus particularly unpredictable in its outcome.This chance effect is part of the ware’s attraction, giving each piece with distinct identity, with individual patterns and tonal variations created as if by nature. Irregular purple splashes had an immense appeal to the literati and nobility of the time, who was able to appreciate simplicity, modesty and abstraction as opposed to the aristocracy in most regions and periods who preferred extravagant materials, lavish designs. In this particular rare example, the undulating purple splashes complemented by subtle highlights of leafy green provide an attractive contrast against the bright lavender-blue glaze underneath, simulating the beauty of abstract paintings, enticing one for an intimate inspection of its timelessness and spontaneity.

This noble bowl belongs to one of the five celebrated Song wares and at the same time one of the most daring creations China’s history. 'Jun' ware, with its entrancing purple-and-blue colour combination, was produced by many different manufactories in Henan, including the Juntai kilns in Yuzhou and even at the Ru kilns at Qingliangsi in Baofeng, probably from the end of the Northern Song period (960-1127) until at least the Ming dynasty (1368-1644).

Jun ware bowls are represented in world-famous collections, such as the British Museum, London, from the collection of Sir Percival David, illustrated in Margaret Medley, The Chinese Potter, Oxford, 1976, fig. 83, and in the Palace Museum, Beijing, published in The Complete Collection of Treasures of the Palace Museum. Porcelain of the Song Dynasty (I), Hong Kong, 1996, pl. 225. Compare also two bowls in the Baur Collection, Geneva, included in John Ayers, The Baur Collection, Geneva; Chinese Ceramics, vol. 1, Geneva, 1968, nos. A31 and A32. Two bowls from the Edward T. Chow collection, amongst the best extant examples, were sold in our London rooms, 16th December 1980, lots 264 and 265, and again in these rooms, the former on 19th May 1987, lot 209, and later in the T.T. Tsui collection; the latter on 7th June 2000, lot 93.