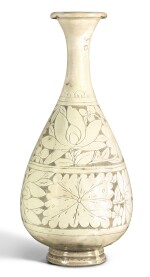 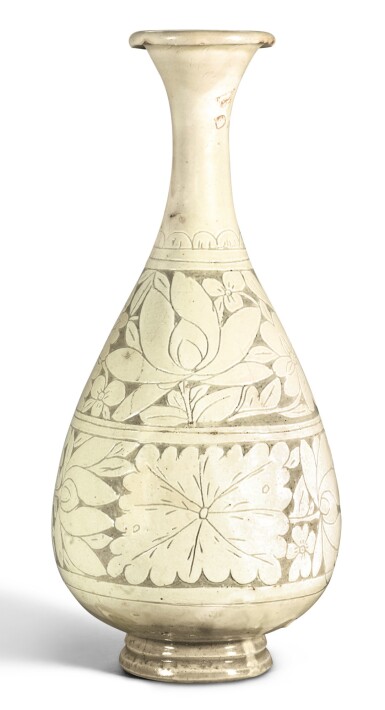 the pear-shaped body resting on a short splayed foot, sweeping up to a slender waisted neck and curved rim, boldly carved around the exterior through the white slip to the buff-coloured body with two wide bands of large lotus leaves and flowers interspersed with smaller buds and sprigs of leaves, a simple band of plain petals around the shoulder, all beneath a translucent milky glaze

The vase has a circa 2.5cm., wide shallow chip to the underside of the rim, a 10x4mm., glaze flake to the top of the rim, two (7 and 12mm., wide) glaze flakes to the neck, some glaze firing impferections including a circa 20cm., line in the glaze running across the foot, and pooling of the glaze around the neck.

This elegant vase is notable for its bold and fluidly carved design of lotus leaves and blooms, separated in different decorative bands. Vessels carved in white slip against a buff-coloured ground are discussed by Yutaka Mino in the catalogue to the exhibition Freedom of Clay and Brush through Seven Centuries in Northern China, Indianapolis Museum of Art, Indianapolis, 1980, p. 96, where he notes that wares of this type were produced from the 11th through the 14th century.

See also yuhuchun vases with similar designs in black slip against a white ground, such as a smaller vase with two bands of leafy scrolls, in the Saint Louis Art Museum, illustrated in Robert D. Mowry, Hare’s Fur, Tortoiseshell, and Partridge Feathers, Cambridge, 1995, pl. 68; and one of similar proportions with a large band of lotus flowers and leaves, from the Hong Rui Tang collection, sold in these rooms, 12th December 1989, lot 250.