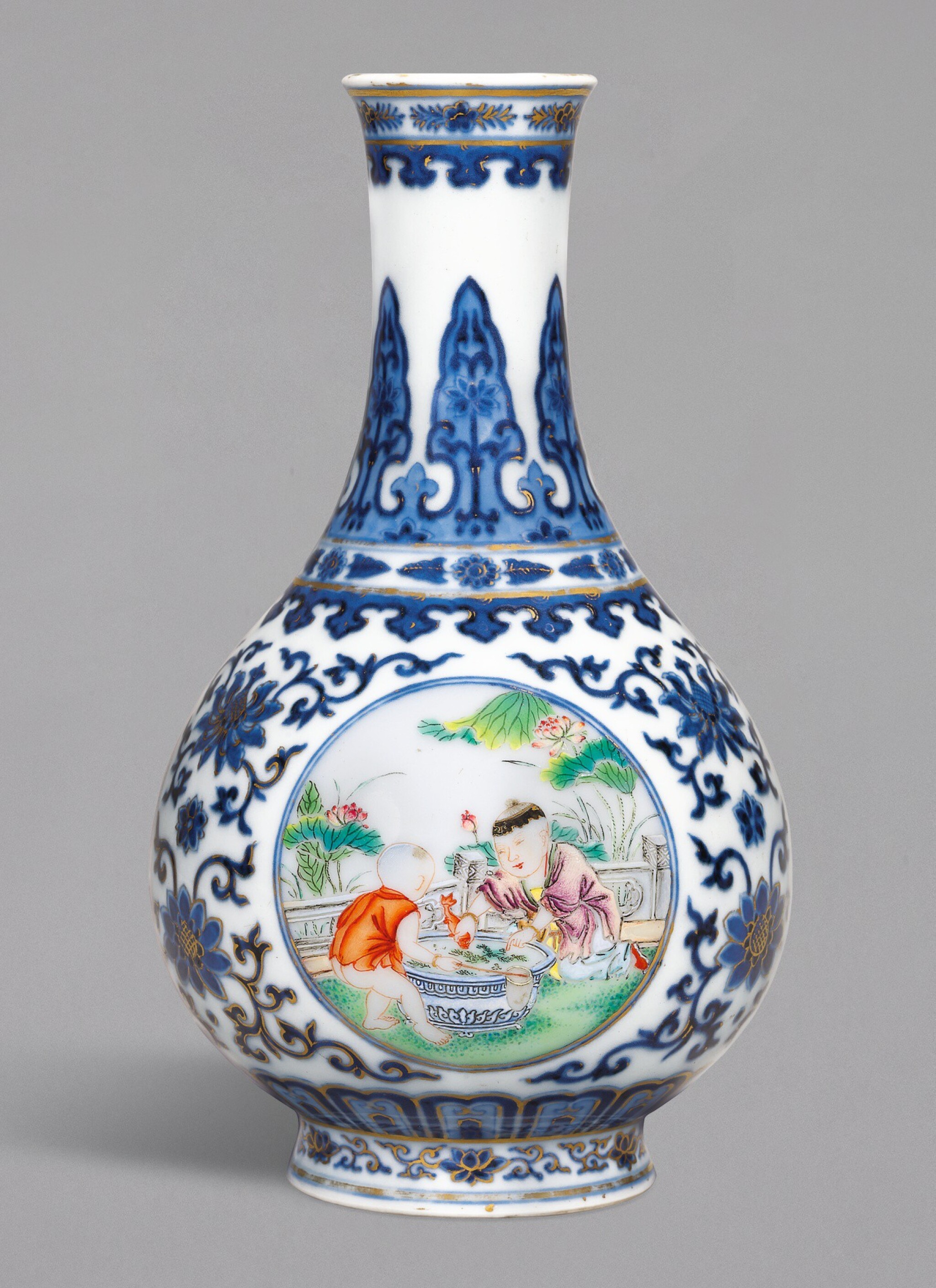 finely potted with an elegant pear-shape body sweeping from a short foot to a tall slender neck with everted rim, decorated with three round white medallions to the body, each delicately enamelled with boys at play, all between stylised foliage bearing large lotus blossoms rendered in rich tones of cobalt blue and gilt highlights, the neck embellished with bands of pendant ruyi heads and overlapping lappets, the shoulder encircled by stylised floral blooms, bordered by a band of foliage at the rim and a lotus scroll to the foot, inscribed to the base with a six-character seal mark in underglaze blue against a turquoise-ground

There are some light rubbing and wear to the gilding, and a small three-point glaze crack to the base.

Exquisitely painted with two lively scenes of boys playing against a luxuriant underglaze-blue and gilt lotus scroll, this vase is an archetypal example of imperial porcelain made in the Qianlong reign. Each figurative roundel is meticulously painted, and the craftsmen has skilfully captured the children's carefree spirit through their joyful expressions and animated poses. Depictions of boys at play, which represent the wish for many sons, proliferated on porcelain during the reign of the Qianlong Emperor, as he was particularly fond of auspicious and amusing designs.

Yingxitu (pictures of boys at play) and baizitu (pictures of hundred boys) are intimately connected with the strong desire for male offspring, who would perform ancestral sacrifices and thus endure the continuation of the family line. Depictions of children in gardens became an established painting genre in the Song dynasty (960-1279), and by the Ming period (1368-1644) boys were depicted engaged in activities that also conveyed auspicious messages or that impersonated adult aspirations. The two scenes on this vase depict the boys playing with goldfish and butterflies, which represent prosperity, wealth and longevity. Goldfish (jinyu) are homophonous with the word for gold (jin) and jade (yu), and together with lotus and boys they convey the wish liannian youyu (May you continuously have plenty year after year). Butterflies on the other hand are symbolic of longevity, and often appear on contemporary paintings and woodblock illustrations, such as the anonymous album leaf from the collection of Charles Lang Freer, now in the Freer Sackler Gallery Galleries, Smithsonian Institution, Washington D.C., accession n. F1909.244K.

The two figurative roundels on this vase are set against a lotus scroll embellished with gilt reminiscent of cloisonné enamel ware, where the different enamels are separated by fine copper wires. While this technique was seldom used, it is found on a much larger hexagonal vase similarly decorated with boys in panels, sold in our Hong Kong rooms, 7th April 2015, lot 3616. See also a Qianlong mark and period perfumier with butterflies in underglaze-blue and overglaze gilt, in the Palace Museum Beijing, illustrated in The Complete Collection of Treasures of the Palace Museum: Miscellaneous Enamelled Porcelains and Plain Tricoloured Porcelains, Shanghai, 2009, pl. 143.

While no other closely related vase appears to have been published, vases painted with figurative cartouches are known; a Qianlong mark and period vase with boys against a yellow ground, in the Palace Museum, Beijing, is illustrated in The Complete Collection of Treasures of the Palace Museum: Porcelains with Cloisonné Enamel Decoration and Famille Rose Decoration, Hong Kong, 1999, pl. 27; a lobed vase with the panels against a celadon ground, is illustrated in Sekai tōji zenshū/ Catalogue of World's Ceramics, vol. 12, Tokyo, 1956, pl. 90; and another was sold in our Hong Kong rooms, 29th November 1977, lot 165.