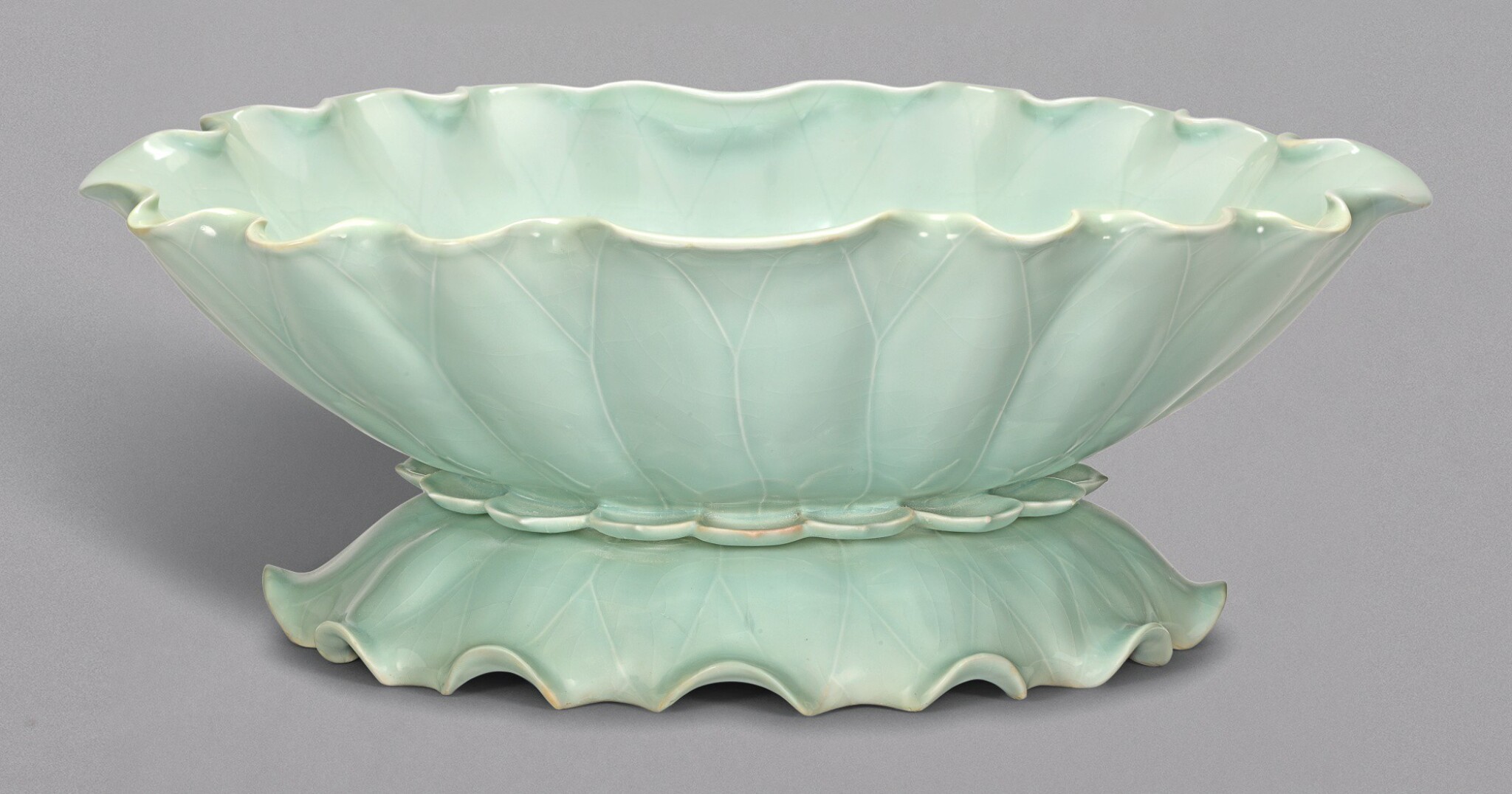 naturalistically modelled as a large curled lotus leaf gently folding outwards and inwards, with veins and lotus seeds to the interior, tapering to a horizontal row of petals and resting on a similarly shaped foot, evenly covered to the exterior and interior with a soft celadon coloured glaze thinning to white at the edges and pooling to deeper tones in the recesses, suffused overall with an attractive matrix of icy crackles, the base inscribed with a six-character seal mark in underglaze blue

Examination with UV light reveals a number of small chips to the extremities, which has been restored with over-spray extending to the surrounding areas. A few of the restored chips to the bottom edge of the base have flaked/chipped off (the largest ca. 1 cm).

This jardinière is remarkable in its refinement and must have been created under the tenure of Tang Ying (1682-1756), who served the Yongzheng and Qianlong (r. 1736-1795) emperors as supervisor of the Qing imperial kilns at Jingdezhen from 1726 until his death. Modelled naturalistically in the form of an open lotus flower, this piece was a technical tour de force that would have required the utmost attention at every stage of its production; its irregular shape and large size would have been particularly challenging to glaze and fire successfully and any imperfection would have resulted in the rejection and subsequent destruction of the piece.

This piece appears to be unique and was probably made upon a specific order. Its inspiration may have come from Northern Song dynasty (960-1127) censers in the form of lotus flowers. One such censer has been recovered from the Ru manufactories at Qingliangsi, Baofeng, Henan province, and illustrated in Grand View: Special Exhibition of Ju Ware from the Northern Sung Dynasty, National Palace Museum, Taipei, 2006, cat. no. 19. Porcelain ware in the form of lotus flowers were also made in the early Ming dynasty (1368-1644), such as the white-glazed stand unearthed from the Yongle (r. 1403-1424) strata at the site of the imperial porcelain kiln factory in Jingdezhen and illustrated in Imperial Porcelains from the Reigns of Hongwu and Yongle in the Ming dynasty, Beijing, 2015, pl. 129.

Porcelain vessels delicately modelled in the form of flowers or leaves were popular in the early Qing dynasty, although these are generally small-scale items for the scholar’s desk. See for example a waterpot similarly modelled as a flower and leaf, but with a Qianlong mark and of the period, in the Nanjing Museum, included in the exhibition Treasures in the Royalty. The Official Kiln Porcelain of the Chinese Qing Dynasty, Shanghai, 2003, cat. no. 343.

The naturalistic rendering of the petals and leaves of this jardinière, and the soft tone of the celadon glaze endows this piece with a sense of serenity and modesty, which are well suited to its subject matter. The lotus, hehua or lianhua in Chinese, is closely associated with Buddhism, and represents qualities such as purity, integrity and spiritual awakening. The flower rises undefiled from impure muddy waters, symbolising the power of the soul to emerge from the physical world, samsara, and achieve enlightenment.