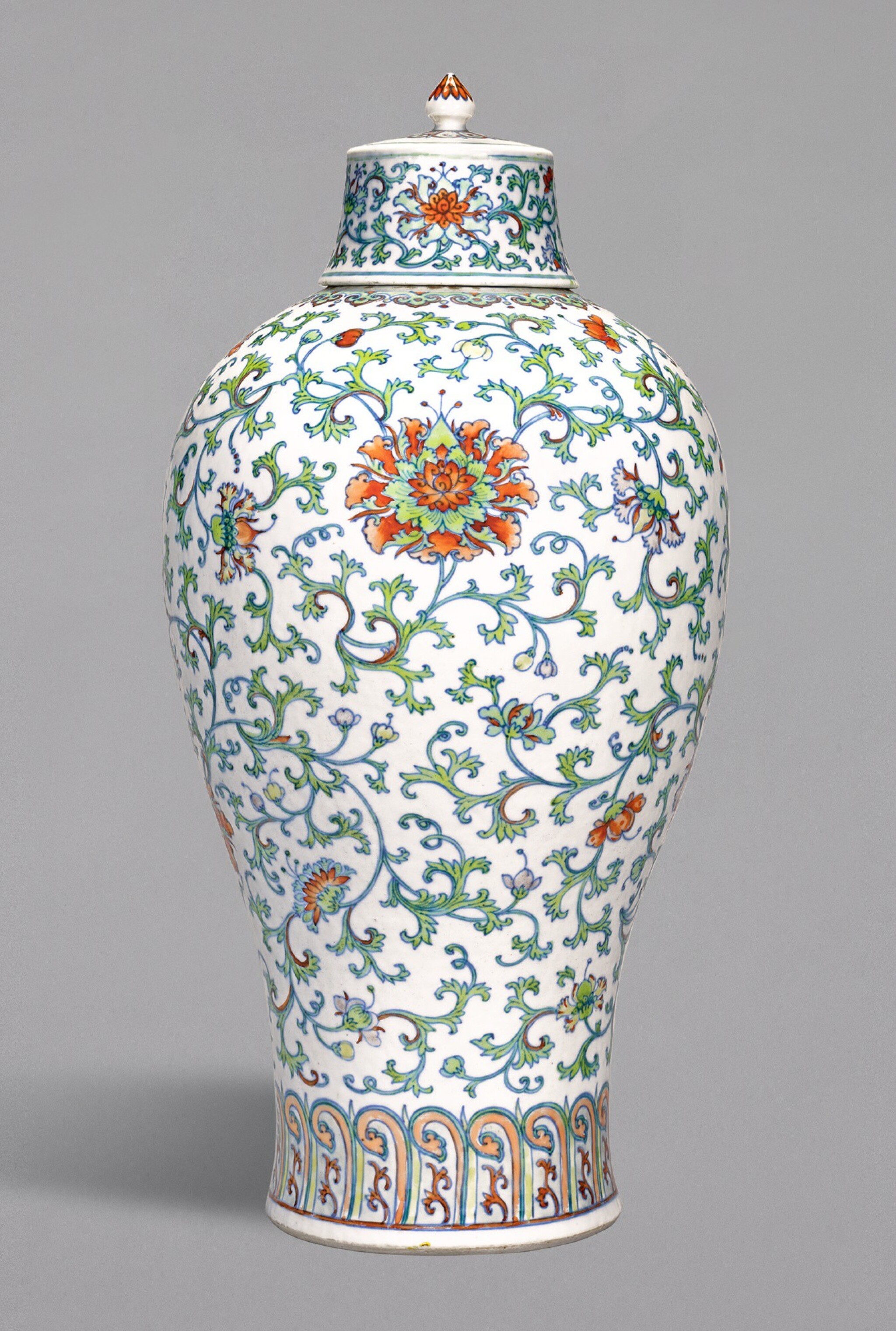 sturdily potted with a tapering body elegantly rising to a broad rounded shoulder and surmounted by a short waisted neck, the voluptuous body wreathed with prominent floral blossoms borne on stylised foliage issuing further colourful blooms and buds between a band of ruyi heads and elongated lappet border, the neck rendered with a row of ruyi heads collaring the mouth and stylised lappet border together with a narrow band of composite scrolls skirting the foot, the well-fitted cover similarly decorated with flower scrolls and embellished with stylised lappets radiating from the lotus bud finial on the slightly domed top

Notable for its generous proportions and finely painted feathery scroll in doucai enamels, meiping of this type are rare and no other closely related example appears to have been published. The floral scroll was masterfully executed, with each bloom and flowering bud skillfully painted as viewed from a different angle, thus creating a sophisticated and yet uncontrived design.

A slightly smaller meiping and cover with a dragon against a similarly rendered flower scroll, from the Qing Court collection and still in Beijing, is illustrated in The Complete Collection of Treasures in the Palace Museum. Porcelains in Polychrome and Contrasting Colours, Hong Kong, 1999, pl. 237; and one lacking the cover and painted with bajixiang, from the collection of Gordon Cummings, was sold at Christie’s New York, 3rd June 1988, lot 313.

This vase echoes in multiple ways the celebrated porcelain tradition of the Ming dynasty (1368-1644); the doucai colour scheme, whereby the outlines of the design were first painted in underglaze blue and later filled in overglaze enamels, references the Chenghua reign (r. 1465-1487), when the quality of doucai porcelain was at its peak. Its rendering of the floral blooms and feathery scroll, as well as the decorative band at the foot, on the other hand recall porcelain designs of the early Ming period. A Yongle (r. 1403-1424) period meiping, of much smaller size, painted with lotus buds and blooms, in the National Palace Museum, Taipei, was included in the Museum’s exhibition Radiating Hues of Blue and White. Ming Dynasty Blue-and-White Porcelains in the National Palace Museum Collection, Taipei, 2016, cat. no. 15; and a reconstructed meiping with a Xuande mark and of the period, painted with dragons above a similar band at the foot, recovered from the waste heaps of the Ming imperial kiln site in Jingdezhen, is illustrated in Imperial Porcelains from the Reign of Xuande in the Ming Dynasty, Beijing, 2018, pl. 61.