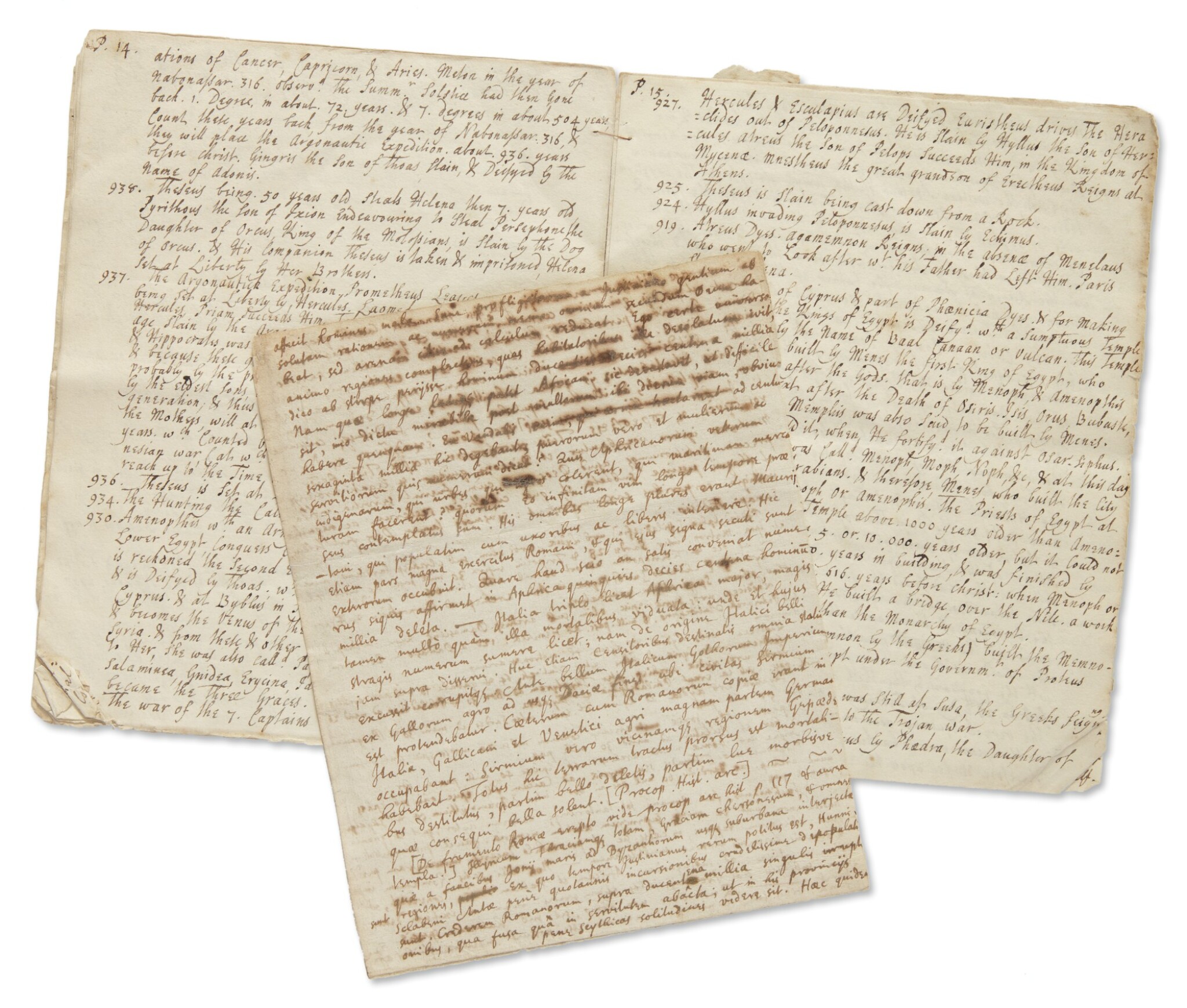 Autograph Manuscript of notes from ancient historians. Circa 1670. 2 pages in Latin on a single leaf; a horizontal tear to the leaf expertly mended.

[TOGETHER WITH] Contemporary Manuscript Copy of Newton’s “A Short Chronicle from the first memory of things in Europe to the conquest of Persia by Alexander the Great.” Circa 1720. 24 pp in English; horizontal crease mark across the center.

NEWTON TRANSFORMS HISTORY INTO A SCIENCE.

Isaac Newton pioneered the scientific study of history. Drawing on the physics of the Principia, Newton founded a new science of chronology based on celestial mechanics – a paradigm shift enabling the objective measurement and quantification of the often vague datings of history. Using the astronomical clockwork of the heavens as an objective measuring device, Newton’s chronology applies the precession of the equinoxes to the exact dating of historical events. The central astronomical argument of Newton’s Chronology is that if the exact quantitative positioning of the equinoctial points can be determined for one ancient historical event, comparative analysis and the principle of recession enables the deduction of the exact dating of other known historical events. Newton professed to have found such an exact positioning of the stars for Jason’s expedition with the Argonauts, and he himself had explained and quantified the precession of the equinoxes in Book III of the Principia (prop XXXIX, prob XX).

Newton wrote both a long treatise on chronology and an abridged version. The longer work was published only posthumously in 1727 as The Chronology of Ancient Kingdoms Amended, but the shorter treatise found its way into public hands as a manuscript beginning in 1717. Newton himself records that his “particular friend” Princess Caroline – the Princess of Wales and (later) the wife of King George II – expressed a wish to see his Chronology, and he accordingly presented her with an abstract of it, “thinking it in that shape the properest for Her Perusal.” Titled “A Short Chronicle from the first memory of things in Europe to the conquest of Persia by Alexander the Great,” Newton’s abstract addresses events dating from 1120 BCE to 331 BCE. “A Short Chronicle” is its own distinct creation, differing markedly in style and content from Newton’s longer Chronology. Sparse in form, the work has been compared to “a businessman’s ledger”: the text of Newton’s “Short Chronicle” consists of a brief introduction followed by a catalogue of chronologically arranged historical events (with some of the listings having varying degrees of explanatory comment). Very little is known about the actual writing process which brought this text into being; it is not even known whether Newton had worked at composing such a text prior to Princess Caroline’s request. Some scholars think that the method by which Newton deduced his particular historical datings bears resemblance to the way he revised Kepler’s Rudolphine Tables (for the purpose of revising the Gregorian calendar). The text was published in 1727 as the opening section of the longer work The Chronology of Ancient Kingdoms Amended.

The manuscript leaf offered here contains Newton’s notes and transcriptions from ancient historical and geographical sources, including: two lengthy citations from Procopius’ Secret History (relating to Justinian and the Vandal War fought in Africa); a lengthy citation from Eunapius’ Lives of the Philosophers and Sophists (relating to the destruction of the Serapeum, the Alexandrian Temple which housed a portion of the Library of Alexandria); together with notes on geography from two other unidentified sources. Newton apparently culled this particular manuscript for use in at least three of his writings: the Eunapius text is cited both in his posthumously published work on prophecy (Observations upon the Prophecies of Daniel and the Apocalypse of St. John) and also in his unpublished and long-nurtured opus on The History of the Church; while some of the Procopius text is found cited in Newton's unpublished work on the Apocalypse, Tuba Quarta.

The present manuscript copy of the “Short Chronicle” is thought to have belonged to the antiquary Maurice Johnson, and it was very possibly a presentation copy from Newton himself. The manuscript tradition of the “Short Chronicle” has not been formally studied, and no formal census of existing copies has been undertaken. Some very small number of copies — perhaps 3 or 4 — are known to have been distributed by Newton, and some small number were further illicitly copied in France. As Oxford MS 361(1)A evidences, Newton is known to have himself written out copies of the text, but it is uncertain whether Newton himself wrote out any of the distributed copies. Newton and Johnson were correspondents; and given their mutual interest in history and antiquities — Newton was in fact an honorary member of the antiquarian society Johnson headed — it would have been entirely natural for Newton to gift Johnson a copy of this text. Johnson was also a good friend of William Stukeley, Newton’s first biographer, and it is perhaps the case that Stukeley was the conduit through which the copy came into the possession of Johnson. The present exemplar appears to be an early or transitional copy of the text: it does not contain the last line of the printed text, and the second line of the printed text is here added as an inserted sentence – features shared with some of the drafts in Oxford MS 361(1)A. Aside from the Oxford manuscript, there are only 4 contemporary manuscript copies of the “Short Chronicle” known to be extant. The present exemplar brings the total number of known copies to 5.

The study of history was of great critical relevance to Newton’s life and work. Throughout his life Newton meticulously researched the historical record of every field he investigated, and the written notes he made in the course of such research fill thousands of pages. Newton believed that the ancients had genuine knowledge of the "true astronomy" and the "true religion" (which became bastardized with the invention of idolatry), and he accordingly thought that understanding chronology in the context of “true astronomy” could lead to a better understanding of “true religion” and the Bible (enabling one to ascertain the meaning of prophecies and calculate the date of the Apocalypse and Second Coming). The documents of Newton’s life evidence that “chronological researches in the service of religion ran parallel with his studies of natural philosophy throughout his life.” (Manuel, Isaac Newton Historian, p 9) Even as Newton was putting the finishing revisionary touches on the final edition of his Principia, he too was very actively engaged in polishing his chronology. In addition to the Chronology, Newton also wrote a historical treatise on The Original of Monarchies, and a long-nurtured, but never published, opus on The History of the Church.

Newton biographer Richard Westfall conceives that Newton’s total life work was directed at a reinterpretation and new definition of “the central tradition of the whole of western civilization.” In such perspective, Newton’s engagement with history and chronology can be seen as an attempt to give authoritative definition to the timeline of human history for the purpose of understanding the historical development of human society and the origins of civilization.

Newton’s researches into history is a topic that has been underexplored academically. Only two scholarly books have been written on the topic: Frank Manuel’s Isaac Newton, Historian (Harvard, 1963) and Buchwald’s and Feingold’s Newton and the Origin of Civilization (Oxford, 2013). A close scholarly study of Oxford MS 361(1)A, which contains multiple drafts and textual variants of the “Short Chronicle” (in both English and Latin), would shed much-needed light on the open questions surrounding this text and manuscript.

Almost all Newton manuscripts are now in institutions, and the present offering is accordingly a rare opportunity to secure one of the few manuscripts remaining in private hands. It is a fine and characteristic example of Newton’s approach to historical research and note taking, and provides important source data for the future study of how Newton selected his raw research data, and how he digested it for later integration into a finished composition. The offered manuscript copy of Newton’s “Short Chronicle” is very probably the only copy in private hands.