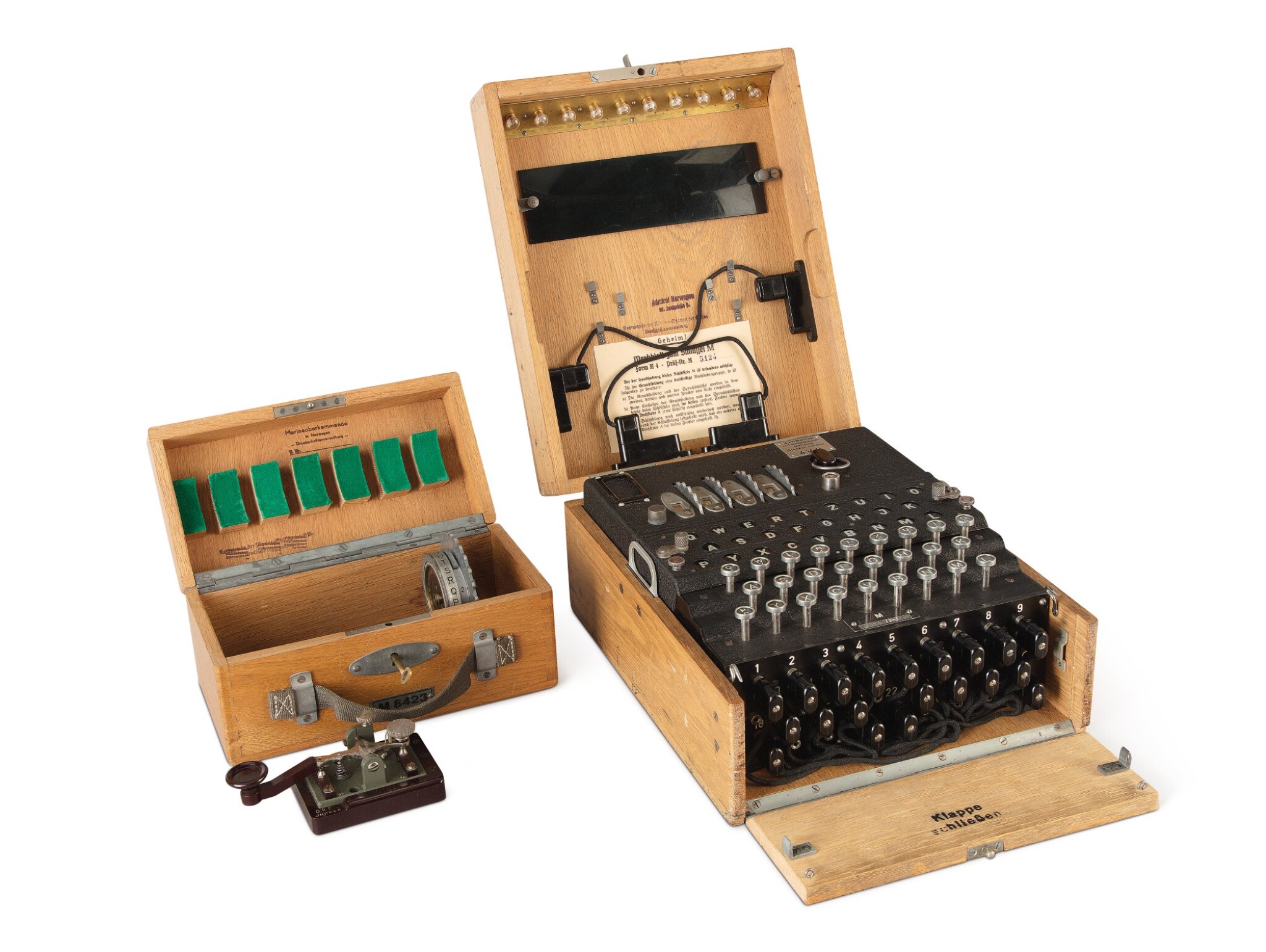 A VERY FINE AND FULLY OPERATIONAL EXAMPLE OF THE FAMOUS GERMAN FOUR-ROTOR ("M4") KRIEGSMARINE ENIGMA CIPHER MACHINE, WITH PROVENANCE TRACING BACK TO OCCUPIED NORWAY. THE RAREST AND MOST DESIRABLE OF ALL ENIGMAS, THE M4 WAS ONE OF THE HARDEST TO DECRYPT. VERY FEW M4 MACHINES SURVIVED THE WAR, AND TO FIND ONE THAT IS COMPLETE, WITH TRACEABLE PROVENANCE, STILL IN SUCH PRISTINE CONDITION, AND FULLY OPERATIONAL IS RARE INDEED.

The M4 Enigma machine was an electromechanical cipher machine specifically developed for use by the U-boat division of the German Navy (Kriegsmarine) for communication with the naval bases, where it played a pivotal role in the Battle of the Atlantic. Admiral Karl Dönitz, the commander of the U-boat fleet seriously doubted the security of the Enigma after several unexplained losses, and had the secret M4 model developed specifically for his fleet. The M4 was ready around May of 1941, and by February of 1942 all M4 machines had been distributed with the new operating procedures placed into effect.

The present example was one of 15 Enigma machines in daily use at a communications bunker and headquarters for the Admiral North Kuste at the Kriegsmarine base in Trondheim, Norway. Following the occupation in 1940, this became the largest German naval base in northern Europe, and the base housed the 13th U-Boat Flotilla, and some 55 U-boats. Norway was an important strategic asset for Germany, as it facilitated access to iron ore from Sweden, and to the North Atlantic and Arctic Oceans. Critical information passed through the Trondheim communications bunker, such as weather observations sent from U-boats in the north Atlantic, among other things. The assorted serial numbers found on the aluminum rotors in the present machine are a good indication of consistent wartime usage, as German operators frequently swapped out rotors from other machines.

While the codebreakers at Bletchley had been reading messages encrypted by the 3-Rotor machines for some time, the introduction of the M4 caught them completely off-guard, shutting them completely out, and it took them a full 9 months to catch up and solve the new code. Few Enigma machines survived the War intact: the Germans destroyed them as they retreated, and for decades after the war governments around the world kept close control over Enigma technology (indeed two of Turing's wartime papers on cryptography remained classified until 2012). So secure was the system believed to be that some governments, unaware of the work of Bletchley Park, continued to use Enigmas after 1945.

The M4 was a variation of the 3-rotor Enigma I machine used by the Wehrmacht (German Army & Airforce). It accepted 3 standard rotors and a narrow fourth rotor in combination with a narrow reflector. The two narrow components allowed all four rotors to fit into a modified three-rotor Enigma chassis. It was issued with eight standard rotors, the first five having wiring identical to the rotors issued with the three-rotor Enigma-I. Two narrow fourth rotors, Beta and Gamma, were also issued with each machine. With the fourth narrow rotor in the "A" position, the M4 became functionally identical to and could communicate with the three-rotor Enigmas used by other branches of the military. With its stricter operating procedures and the ability to select from among 8 standard rotors and two thin fourth rotors gave the M4 a much higher level of security, foiling the Allies' previously successful decryption of the U-boat signals. Compared with the more common 3-rotor Enigma, the M4 had many significant differences beyond the added rotors. It had a different ring-setting mechanism on the rotors, a lockable rotor cover to keep the wheel settings secret, a removable lamp panel which allowed for the inclusion of a printer (Schreibmax), and a power socket for an external power source. The M4 also had a removable top, and two metal brackets that allowed the machines to be lifted out of the compartments in the U-boat radio rooms.

M4 Enigma machines were produced in much smaller quantities than the three-rotor Enigma I machines. In addition, multiple M4 Enigmas were deployed with each U-boat and support ship, and the majority of these were lost when their boats were sunk in combat or scuttled by their crew at the end of the war. Furthermore, German Enigma operators were under strict orders not to allow the enemy to capture any Enigmas; this meant that many Enigmas were stripped of their rotors and destroyed, with many thrown into lakes or oceans to hide any remaining parts. THIS PRESENT MACHINE SURVIVED FOLLOWING THE SURRENDER TO ALLIED FORCES BECAUSE GERMAN OPERATORS WERE KEPT AS PRISONERS OF WAR IN A BARRACKS NEAR THE TRONDHEIM BUNKER THROUGH 1947, WITH THE AIM OF TRAINING THE ALLIES TO OPERATE GERMAN TECHNOLOGY, INCLUDING THE ENIGMA M4.

Admiral Norwegen, Kommando der Marinestation Ostsee — Seized from the Bauaufsicht der Kriegsmarine in Trondheim, Norway by a member of the police force after the capitulation of Nazi forces in 1945 — by descent