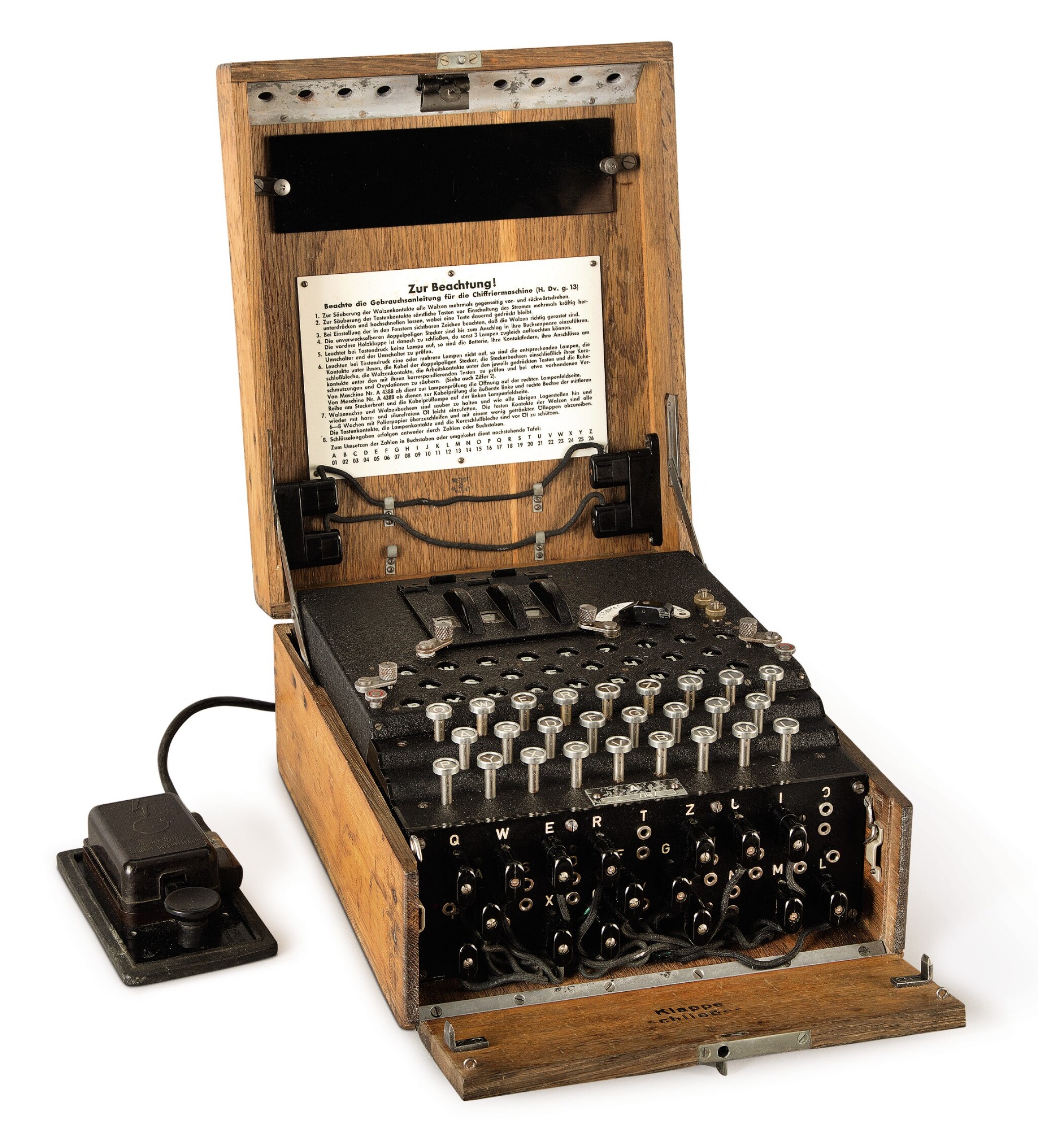 The Enigma I, often called the "Heeres" Enigma, was used by the German Heer (Army), the Luftwaffe (Air Force), and later, by the Kriegsmarine (Navy) before the introduction of the "M4" 4-rotor machine (see lot 37). The serial number 16421/JLA/43 of the present machine indicates that it was manufactured in 1943 by Chiffriermaschinen-Gesellschaft Heimsoeth und Rinke, (or ChiMaAG) a German cipher machine firm in operation from 1923-1945.

Patented in 1918 by Arthur Scherbius, a board member of ChiMaAG, the Enigma machine uses three electromechanical cipher wheels, each with 26 contacts at either side. The three rotors would be placed in pre-arranged positions, and the user would then type in a plain text message using the keyboard. The machine would encipher the message, and each corresponding encoded letter would light up on the light panel. The enciphered message would then be sent to the receiving party, usually via Morse code. The receiving party would then decipher the message, using another Enigma machine with the rotors set to the same position as the first. The rotors of all Enigmas were interchangeable, and indeed, rotors were swapped out very frequently.

The Enigma machine set a challenge that was answered by the remarkable team at Bletchley Park, whose achievements provide one of the most compelling stories of World War II. Breaking Enigma was the work of many, including Polish cryptographers who had already begun to decipher Enigma traffic before the war; naval forces who risked their lives capturing Enigma machines and code books; Alan Turing and other mathematicians with their revolutionary models for deciphering; Tommy Flowers and other mechanical geniuses who designed 'Colossus', the world's first programmable digital computer, at the GPO Research Centre at Dollis Hill in north west London; the hundreds of Wrens who operated the Bombes and, later, Colossus machines that made possible the daily decrypts. Their work saved countless lives and had an enormous impact on the submarine war in the Atlantic, the North African campaign, and the Normandy invasion; the work of Bletchley Park is often said to have shortened the war by two years. Furthermore, by coming to the understanding that to defeat Enigma it was necessary to mechanize much of the work of decryption, they helped to inaugurated the computer age.