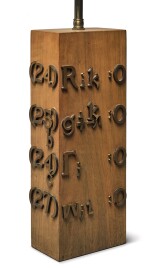 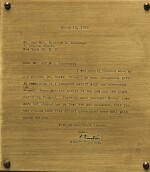 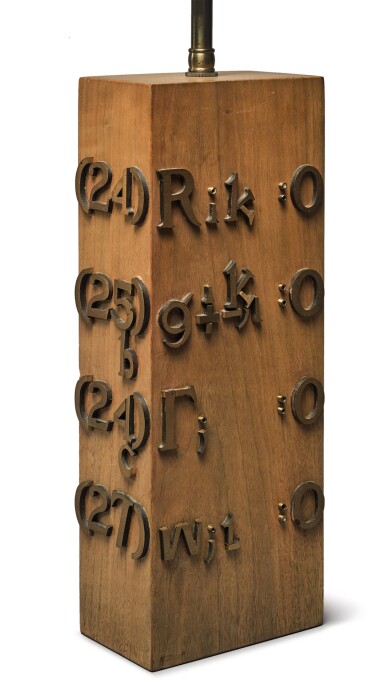 Wooden desk lamp (5 x 3 x 13 in), one side with photo reproduction of Einstein letter on brass plaque (3 3/4 x 4 ½ in), two other sides with four components of Einstein's field equations for his Theory of General Relativity in brass, topped by a two-bulb lamp fixture in brass, with lampshade.

A most unusual artifact of the Atomic Age. William L. Laurence was the Pulitzer prize-winning New York Times science writer secretly seconded to the Manhattan Project; he observed the detonation of the first atomic bomb at Alamogordo on 16 July 1945 and flew on an observation plane with the mission that dropped the bomb on Nagasaki on 9 August. He would have known Admiral Lewis L. Strauss through the U.S. Atomic Energy Commission on which the latter served from 1946 to 1958.

This table lamp provides representations of the equations of Einstein's Laws, with references (24, 25b, 24c, 27), and a brass photo reproduction in facsimile of a typed letter, signed, from Albert Einstein to Laurence, dated 19 March 1953, in which Einstein makes a remarkable comparison of himself with "our venerated Moses" and further develops the analogy. The letter is not recorded in the Einstein Archives and is apparently unpublished; it is not known whether the original survives.

Sotheby's would like to thank Prof. Diana K. Buchwald for her assistance with the cataloguing of this lot.