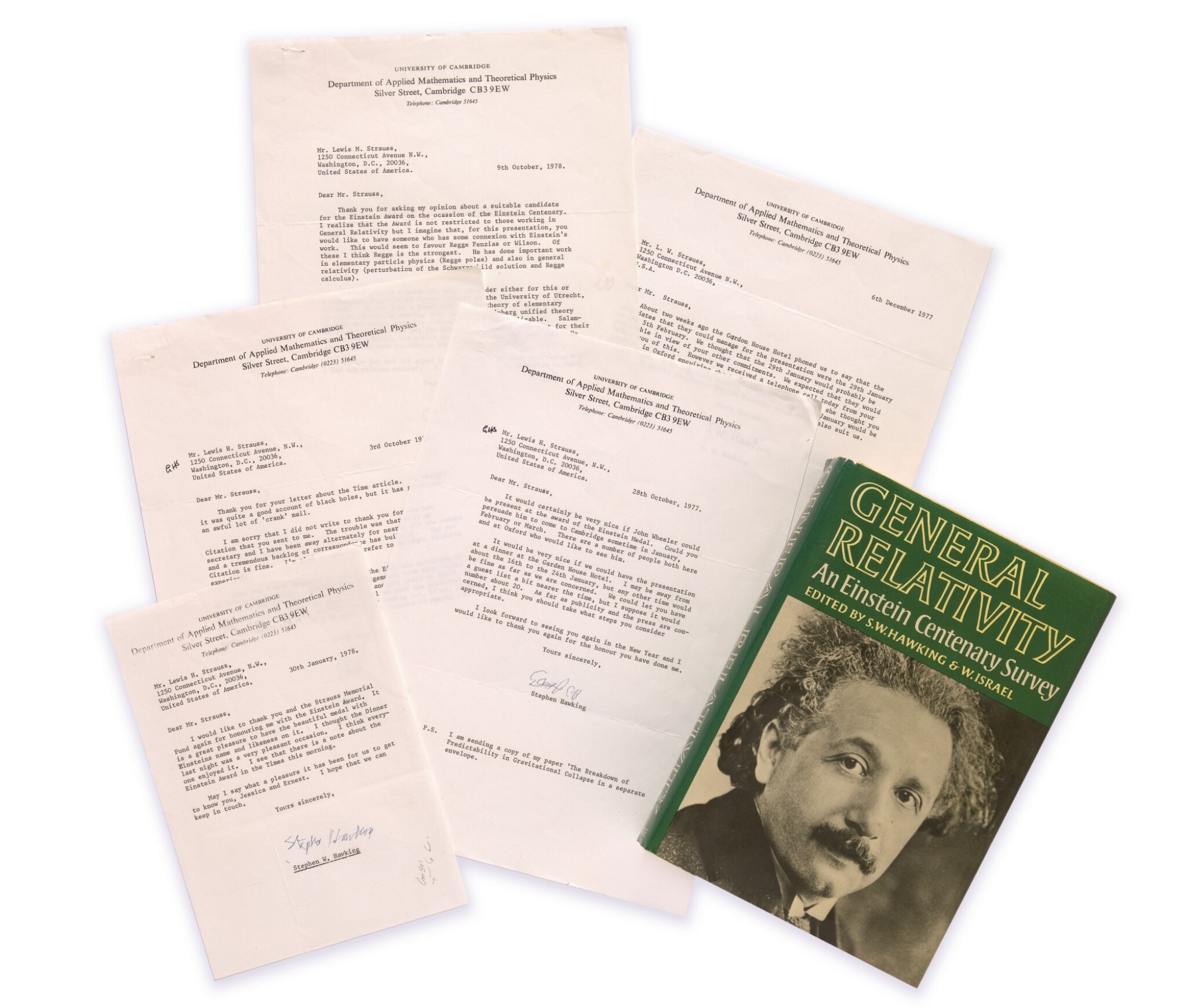 Octavo. Original cloth, dust jacket. SIGNED AND INSCRIBED IN HAWKING'S OWN HAND "FOR LEWIS, FROM STEPHEN".

WITH: 2 TYPED LETTERS SIGNED ("Stephen" and "Stephen Hawking"), together 2 pp, Cambridge, 28 October 1977 and 30 January 1978, on Department of Applied Mathematics and Theoretical Physics letterhead, to Lewis H. Strauss, regarding the Albert Einstein Award. AND WITH: 3 typed letters signed secretarially, also to Strauss.

A fine collection of material linking two of the most famous physicists of the 20th century, by way of a key player in the development of atomic energy. This copy of the Einstein Centenary Survey, which Hawking co-edited, is inscribed in Hawking's own hand to Lewis H. Strauss: "For Lewis, from Stephen". Strauss was the son of Lewis L. Strauss (1896-1974), one of the founding commissioners of the U.S. Atomic Energy Commission and the endower of the Albert Einstein Award, of which Hawking was the recipient in 1978. (Lewis H. Strauss carried out the administration of the award following his father's death.)

Also present are two typed letters signed by Hawking to Strauss, written from Cambridge University, where Hawking was Professor of Gravitational Physics. A letter of October 28, 1977, reads in part, "It would certainly be very nice if [American physicist] John Wheeler could be present at the award of the Einstein Medal. Could you persuade him to come[?]... There are a number of people both here and at Oxford who would like to see him".

He also suggests the Garden House Hotel as site for the award dinner, and adds a postscript referencing his paper "The Breakdown of Predictability in Gravitational Collapse." In the second signed letter, dated January 30, 1978, Hawking writes, "to thank you and the Strauss Memorial Fund again for honoring me with the Einstein Award. It is a great pleasure to have the beautiful medal with Einstein's name and likeness on it. I think the Dinner last night was a very pleasant occasion."

Hawking lost the ability to write altogether not long after the book and these letters were signed, as such, INSCRIBED MATERIAL IN HIS OWN HAND IS VIRTUALLY UNKNOWN IN THE TRADE.

Included are three typed letters signed secretarially, also addressed to Strauss, in which Hawking recommends Tullio Regge as the next recipient of the Einstein Award (which indeed he would become, as the final recipient), and referencing his own article on black holes in Time magazine, among other things.