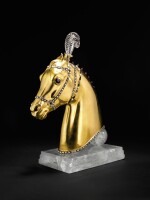 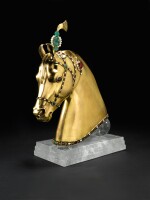 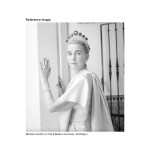 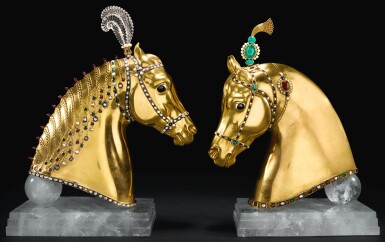 Accompanied by two gemmological reports, two appendix letters and a letter from the Assay office.

The mare is accompanied by GGTL report no. Nr 14-B-3242, dated 30th September 2014, stating that the 12 sapphires and 34 rubies come mainly from Burma, most of which with no indication of thermal treatment. The 24 emeralds come mainly from Colombia, with oil treatment. Additionally there are 52 pearls and 182 diamonds.

The stallion is accompanied by GGTL report no. Nr 14-B-3340, dated 30th September 2014, stating that the 80 sapphires and 164 rubies come mainly from Burma, most of which with no indication of thermal treatment. The 12 emeralds come mainly from Colombia, with oil treatment. Additionally there are 110 pearls and 73 diamonds.

Each report accompanied by an appendix letter discussing the history of the sculptures and the work of Herbert Haseltine.

Additionally accompanied by a letter from the Assay office, stating that the metal parts were found to be 999 parts per thousand gold content, except for the pins which attached the red beads to the main of the mare. The sculptures could not be UK hallmarked as the pins connecting them to the base were found to be base metal.

Gem stones with some surface reaching inclusions, including the rock crystal bases. Plume is slightly loose but in place securely.

Barbara Hutton, commissioned from the artist

To in included in the forthcoming Maharajas and Nawabs of “Gujarat”, ed. Kenneth X. Robbins, Professor Maitree Sabnis and Nawab Mir Jaffar Imam of Kamadhia.

Son of landscape painter William Stanley Haseltine, Herbert developed his interest in horses in his youth. An American, born in Rome, educated at Harvard and trained in art in Munich and Paris, he was wordly and well-connected. His passion for polo and hunting led him to horses as a subject for sculpture, encouraged by Aimé-Nicolas Morot who suggested he try sculpture as a preparatory exercise for his drawing and painting studies. His first sculpture was a model of two mounted polo players in action, and invited acclaim at the Paris Salon of 1906. He continued with the subject of polo which led to a growing reputation and commissions from racehorse owners and enthusiasts across the world. Among his patrons were King Edward VII, Queen Alexandra of England and Prince Schönburg-Hartenstein of Vienna. His commissions took him as far afield as India where, through the suggestion of Edwin Lutyens, the Maharaja Jam Saheb of Nawanagar in 1925 commissioned Haseltine for a monument to the Maharajadiraj Jam Sri Rawalji, founder of the House of Nawanagar.

It was in India that Haseltine started to develop a project that would take many years, and a very special patron, to complete: the 1949 multi-gem and gold horse heads ‘Indra’ and ‘Lakshmi’. These heads were modelled after the Maharaja’s favourite stallion and mare, drawing on 17th and 18th century Indian miniature paintings for the decorative elements of bridle, collar and plumes. Influenced by his interest in Egyptian Art, Haseltine pared back these heads to elegant simplicity, the first versions executed in bronze. However, Haseltine envisioned a more refined and opulent incarnation of ‘Indra’ and ‘Lakshmi’, to be cast in gold and ornamented with precious stones. Haseltine finished most of the preliminary work on these pieces soon after his visit to India in 1938 but the great expense of these materials meant that he had to wait for the right patron before he could carry out his designs.

This patron was Barbara Hutton who, in the late 1940s, gave Haseltine the chance to finish these beautiful pieces. An heiress of tremendous wealth (inherited from her father, the retail tycoon Frank Woolworth), she displayed in avid interest in the arts, acquiring a magnificent collection throughout the course of her lifetime, with a particular focus on jewellery and ornaments. With Hutton’s support, Haseltine finished the pieces in three years. His work was aided by the Bedi-Rassy Foundry in New York, which cast them in 24 carat gold, mounted on globes of rock crystal, and crowned with carved crystal plumes. Joseph Ternbach, the craftsman and conservator who had done the meticulous surface finishing for the Man O’ War Monument at the Kentucky Horse Park in Lexington, chased and ornamented the gold heads with diamonds, pearls, rubies, sapphires, emeralds, garnets and jade.

These pieces truly represent a serendipity between talent, craft, and means of production. Their significance has been appropriately appreciated in their inclusion in the 2004 exhibition Masterpieces of American Jewelry in New York (later travelling across the globe), and inclusion in the catalogue of that event.