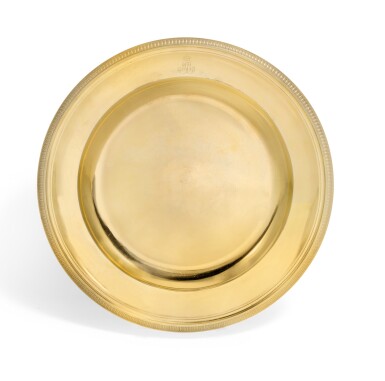 To request further information for this lot, please email Rosalind.Spence@sothebys.com

The monogram is that of Grand Duke Michael Pavlovitch (1798-1849), the fourth son of Czar Paul I and Empress Maria Feodorovna and brother of Czars Alexander I and Nicholas I. He visited Paris in 1814 with the Allies, travelled throughout the Russian Empire on his return, was named Commander of the Guards' Infantry Brigate and helped found the High School of Artillery in St. Petersburg. He fought against Turkey and received the Order of St. George, and in 1831 was named Chief of all of the Military Schools in Russia. He married his cousin Princess Helen of Wurtemberg and had six daughters.

This dinner service was a gift from Michael's brother, Czar Alexander I, along with a palace in St. Petersburg. The Michaelovsky palace, now the State Russian Museum, was built between 1819 and 1823 to the designs of Carlo Rossi. The service was probably ordered at this time, as the various pieces bear French marks for before and after 1819. In 1825 a Mrs. Disbrowe wrote, "Yesterday we went in a body... to see the gold and silver plate, china and glass, given to the Grand Duke Michael, with a new palace by the Emperor; very handsome, but nothing extraordinary, a great many naked ladies as handles and pedestals, the good things in the dishes are to keep them warm, I suppose" (cited in Audrey Kennet, The Palaces of Leningrad, p. 91).

In 1828 Grand Duke Michael further inherited the palace of Pavlovsk from his mother. However, as he had no male heirs, his palace and collections were dispersed. In the late 19th century the service seems to have belonged to Alexander, 2nd Baron Steiglitz. The baron gave a million rubles to found a school of art and industry, and his son-in-law Alexander Polovtsov assembled an extraordinary museum of decorative arts for the school's instruction. Polovtsov's wife and Steiglitz' adopted daughter, Nadzheda was supposedly an illegitimate daughter of Grand Duke Michael Pavlovich. There is unfortunely no indication if she may have inherited the service, or whether it was purchased by her father or husband with the connection in mind.