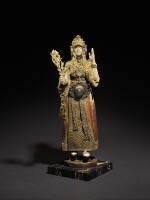 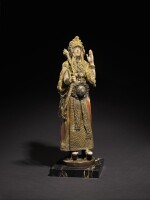 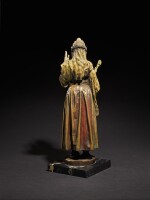 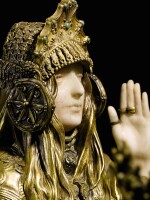 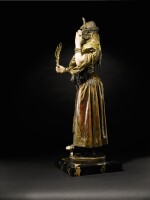 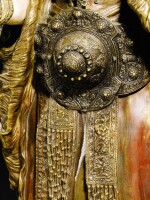 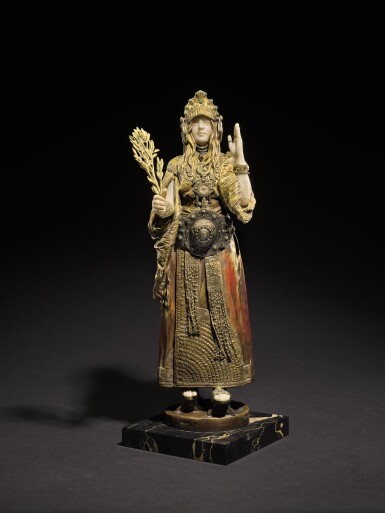 Overall the condition of the bronze and marble is very good with minor dirt and wear to the surface consistent with age. The pieces of jewellery are each composed of two sections applied to the marble; glue used to fix them is visible in a few places. A few of the pieces of jewellery may be reattached. There appears to be a restored break at the proper left wrist. Joints are visible where the marble is attached to the bronze, together with adhesive solution; it is possible that the marble pieces may have been reattached/ strengthened in the past. There are a few small chips to the marble base, including a slightly larger one at the front. The figure is slightly loose on the base.

Conceived in 1897, Gérôme’s Magdalene is the work of an experienced and acclaimed sculptor, who had turned to sculpture relatively late in his career, at the age of 54. Following the unveiling of his first three dimensional work, The Gladiators, at the Salon of 1878, Gérôme had gone on to model his celebrated Tanagra in 1890 and, in the same year, unveiled Ancient Dancer. These three early works reveal the artist’s interest in classicism and his desire to recapture the polychromy of the ancient past. The Magdalene, by contrast, was Gérôme’s first sculpture with a religious subject, and the first with an overtly Middle-Eastern flavour, recalling his earlier Orientalist paintings. The Saint’s exotic costume has an ethnographic quality, and can be compared with the elaborate uniforms of the bashi-bazouks and the sensuous clothing of the belly-dancer in his 1863 canvas, Dance of the Almeh, which was probably inspired by a journey to Egypt and the Near East in 1862.

The Magdalene is directly taken from Gérôme’s painting, The Entry into Jerusalem, also completed in 1897 and today in the Musée Garret, Vesoul (Ackerman, op. cit. no. 441). In the painting, Mary stands before the gates of the city, a crowd behind her, welcoming Christ with a palm branch in one hand and an open palm with the other, a pleasing visual pun; Christ returns the gesture with a sign of blessing. Gérôme’s sculptural version of the Magdalene is deliberately more schematic in appearance, the pose rigid and ceremonial, lending to the figure an air of religiosity, which might otherwise not be wholly apparent, given her eroticised dress. Gérôme also modelled the figure of Christ on the donkey in sculptural form, in his Les Rameaux, of which a cast was sold in these rooms on 10 July 2019, lot 91.

The importance of the present bronze lies in its rarity and in the superb quality of the casting. Ackerman, writing in 1986, was aware of only one other cast, which he records as being in the Stuart Pivar Collection, New York (Ackerman, op. cit. no S. 42). Both the present bronze and the New York bronze were cast by the Siot-Decauville foundry, who were renowned for their expertise in crafting patinas and creating high quality finishes. One contemporary visitor to the foundry wrote, ‘I have seen in the workshop a bronze destined for the museum at Vienne … never have such patinas been obtained; there are surfaces on it, in which you can imagine blood circulating beneath the skin; oxydisation has here produced chords whose harmony astonishes’ (Ward-Jackson, op. cit. p. 78). Gérôme was obsessed with the notion of polychromy in sculpture, once remarking, ‘I first set about colouring marbles, because I’ve always been put off by the coldness of a statue if, once the work is finished, it is left in its natural state’ (Papet, op. cit., p. 293); the choice of foundry was therefore a logical one.

The present bronze exhibits Siot-Decauville’s almost goldsmithing standard in bronze casting and finishing. Note the superbly crisp detailing of the Magdalene’s belt and headdress, the intricate separately cast jewellery and the subtle changes in the colour of the patina: warm red-browns for the dress, with green tints in the folds, and gold for the sleeves, metalwork and hair. The addition of semi-precious stones to the Magdalene’s headdress and jewellery, adds a further colouristic dimension and lends to the bronze a virtuoso quality. Most characteristic of Gérôme’s approach, however, is his use of tinted marble for the Magdalene’s flesh, which recalls his seminal sculptural group, Tanagra, in the Musée d’Orsay, Paris (inv. no. RF 2514).