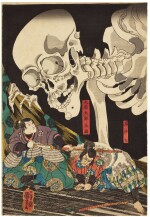 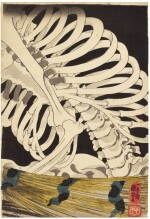 This fearsome apparition has been conjured by the Princess Takiyasha, the surviving daughter of Taira no Masakado (?–940), who spies onto the scene from the left as she reads from a scroll of spells. She calls up a monstrous skeleton to frighten the warrior hero Ôya Tarô Mitsukuni, who was sent by his lord Minamoto no Yorinobu (968–1048) to destroy her witchcraft.

The giant skeleton looms out of the blackness to menace Mitsukuni below by pulling back tattered reed blinds with its fingers.

This tale is dealt with the book (yomihon) Tales of Faithful Uto Yasukata (Uto Yasukata chugi den) (1806) by Santō Kyōden (1761–1816). While the scene in Kyoden’s novel features several hundred skeletons, which are divided into two armies and fight a battle, Kuniyoshi elegantly replaces these with a monumental depiction of a single giant skeleton sensationally spreading the three sheets of a triptych.

The print is untrimmed and benefits from bright, overall unfaded colours. It seems to be one of the earliest states, which is evidenced by a black pigment of granular character that appears on the skeleton’s chin and ribs in the centre of the chest and the grey colour of the eye sockets. In later printings, the band of wiped black disappears from the top of the composition and the eye sockets are of a deeper blue tone.