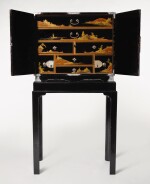 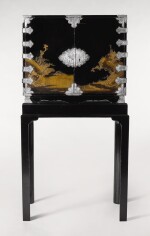 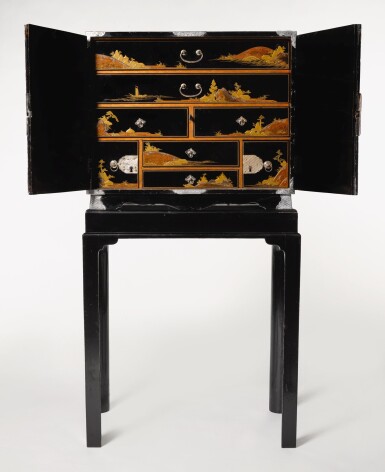 A FINE AND RARE LACQUER CABINET WITH SILVER MOUNTS, FORMERLY IN THE COLLECTION OF THE DUKES OF DEVONSHIRE, CHATSWORTH, EDO PERIOD, LATE 17TH CENTURY

A FINE AND RARE LACQUER CABINET WITH SILVER MOUNTS, FORMERLY IN THE COLLECTION OF THE DUKES OF DEVONSHIRE, CHATSWORTH, EDO PERIOD, LATE 17TH CENTURY

A FINE AND RARE LACQUER CABINET WITH SILVER MOUNTS

FORMERLY IN THE COLLECTION OF THE DUKES OF DEVONSHIRE CHATSWORTH, EDO PERIOD, LATE 17TH CENTURY

the rectangular cabinet with two hinged doors finely decorated in gold and silver takamaki-e, hiramaki-e, kirigane and nashiji on a black ground with a village of thatched huts beneath trees beside a lake and a pagoda on a rocky outcrop, two doors opening to reveal various sized drawers each with landscapes of huts and temples amongst rolling hills and a boat on water, the elaborate silver fittings engraved with karakusa and the centre lock plate with a tiger amongst bamboo and plum trees, on an English black Japanned stand (18th century)

- As can be seen in the illustration, there is small crack to the right-hand door and areas of wear to the black lacquer.

- There are some dents and chips commensurate of the age of the cabinet.

-  One drawer has a crack running around the bottom, but the drawers are in fine condition with a few minor chips to the edges.

- There is silver polish on the interior of the hinges which could be easily cleaned.

The Dukes of Devonshire, Chatsworth.

There is an evolutionary sequence to stylistic change in Japanese export lacquer that can be traced back with some accuracy. In the late 16th century the Namban style relied on pearl inlay and gold lacquer on a black ground (see LOT 113). During the 17th century there was a progression towards a finer lacquer with no pearl inlay and a more pictorial style with the designs mainly of landscapes, initially within a border, but by the 1690s the border had disappeared and the pictorial element had taken over the whole surface as can be seen here in the Chatsworth cabinet. As the style of decoration changed with time so did the shape of furniture following European demands. The full front of the Namban lacquers which followed the designs of esquitoire made for the Portuguese market gave way to two side-opening doors with drawers. The early trade in lacquer had been in the hands of Portuguese, but by 1630s the Dutch East India Company had taken over the trade in Japan. Cabinets and coffers formed a major part of the lacquer trade until 1693 when it ceased abruptly. Demand changed and the cabinet on stand grew out of fashion and so the lacquer was often re-used. In 1694 Thomas Rymell, Japanner, was paid for "Cutting ye back out of two cabinets and new varnishing the outsides.... and for cutting a large Japan chest and setting them into two tea tables". Queen Mary II (1662-1694) appears to have earned herself rather a reputation for such brutal treatment. In 1685 she was taken to task by her advisor Contstantin Huygens for having "sawed, divorced, cut, cliffed and slit asunder and reduced to a heap of monstrous slivers and splinters.....gilt and painted lackwork".

Queen Mary did much to popularise the collecting of Japanese and Chinese porcelain as well as the rich and splendid lacquers supplied to Holland and England at the end of the 17th century. Lacquer was purchased in quantity for the closet and other rooms in the queen's apartments. In addition to their decorative function, the cabinets were used for the display of ceramics, often in three rows with larger pieces on the top row and smaller pieces on the bottom row. This kind of top-heavy arrangement was typical of the Baroque fascination with creating an element of surprise. Stepped shelves were placed on top of the cabinets with "the topp sett in silver guilt or edged at the topp with silver guilt". Cabinets mounted in silver are extremely rare and the Chatsworth cabinet has remarkably fine silver mounts. A pair of cabinets also with similar elaborate silver mounts, formerly in the collection of King William III (1650-1702) and Queen Mary II, have an invoice indicating that the silver mounts had cost ten times the price of the lacquer.

The Chatsworth Inventory of 1764 records a number of India cabinets upon frames in the state dressing room, drawing room, the Queen of Scotts large dressing room and in the bed chamber after that room. It is possible that this cabinet is one of those acquired by William Cavendish, 4th Duke of Devonshire (d. 1764) following the death of George II in 1760, originally in the collection of Queen Mary II.

The black Japanned stand is designed in "the Modern" Chinese fashion popularised by Thomas Chippendale's, Gentleman and Cabinet-Maker's Director, 1754.

For similar examples and a discussion on Pictorial cabinets without borders on doors, see Oliver Impey and Christiaan Jorg, Japanese Export Lacquer: 1580–1850, (The Netherlands, 2005), p. 132–134.