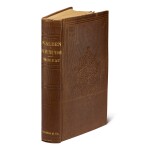 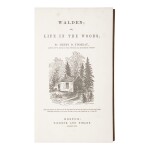 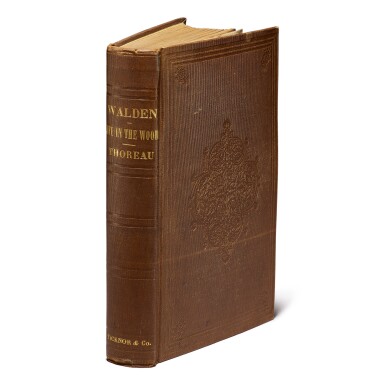 THOREAU, HENRY DAVID | Walden: or, Life in the Woods. Boston: Ticknor and Fields, 1854

THOREAU, HENRY DAVID | Walden: or, Life in the Woods. Boston: Ticknor and Fields, 1854

8vo. Wood-engraved vignette of Thoreau's hut after a sketch by his sister Sophia, lithographed plan of Walden Pond, 8pp. of publisher's advertisements at the end dated April, 1854; but for a minor spot to title and a chip from one fore-margin, an internally clean and very tight copy. Publisher's brown cloth ruled and decorated in blind, spine gilt lettered; unbumped, gilt very bright, two tiny nicks to cloth at spine head. Housed in a custom green cloth over marbled board clamshell case.

First edition, a very fine example of a cornerstone of American letters.

"I went to the woods because I wished to live deliberately, to front only the essential facts of life, and see if I could not learn what it had to teach, and not, when I came to die, discover that I had not lived". Combining nature, philosophy and the classics, Thoreau's account of his year in a shack along the shore of Walden pond was wholly unlike what had come before and his achievement was a uniquely American contribution to literature. The Property of a Gentleman
THOREAU, HENRY DAVID | Walden: or, Life in the Woods. Boston: Ticknor and Fields, 1854
Lot Closed
Lot 67