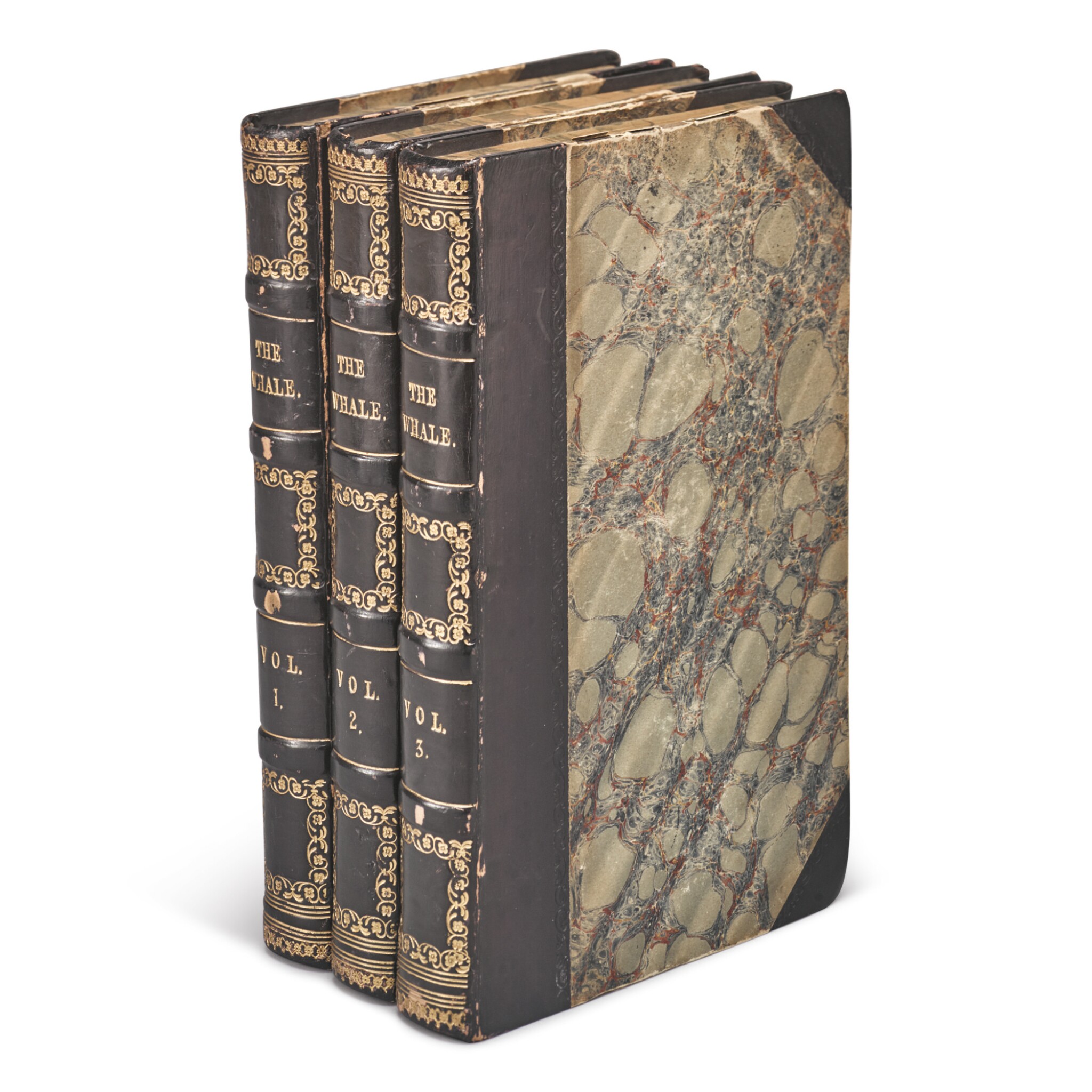 Three volumes, 12mo (4 1/2 x 7 3/8 in.; 115 x 188 mm). Half title to Vol. I, title-page to each volume, appendix to end of Vol. III; minor foxing primarily to preliminary leaves. Contemporary half indigo-black calf over marbled boards, spines gilt lettered and gilt floral motif, edges marbled' minor rubbing to extremities, one or two chips to calf, minor foxing to endleaves. Together in custom quarter blue morocco over cloth slipcase and folding chemise.

The true first edition of a cornerstone of American literature, preceding the New York edition by four weeks — one of only 500 copies printed

"...whenever my hypos get such an upper hand of me, that it requires a strong moral principle to prevent me from deliberately stepping into the street, and methodically knocking people’s hats off—then, I account it high time to get to sea as soon as I can..."

Early in 1850, Melville wrote to his English publisher, describing Moby Dick as "a romance of adventure." It proved to be a critical and commercial failure, however, and by Melville's death in 1891, Moby Dick had gone out of print. Hundreds of differences exist between the British and American editions, some of which are slight, while others significantly impacted the narrative. For example, many British reviewers objected to the fact that the tale was seemingly narrated by a character who perished along with the ship. This misunderstanding was due to the fact that the British edition lacked the Epilogue (it was likely lost by Bentley's printers), which detailed Ishmael's survival. Many of the other changes that were made were the direct result of censorship, and fell into four categories: sacrilegious passages (more than 1,200 words, which attributed human failures to God, or compared human shortcomings to divine ones, were revised or excised entirely); sexual matters (to include reproductive habits of whales, and even Ishmael's anxiety surrounding the nature of Queequeg's underwear); remarks "belittling royalty or implying a criticism of the British" (this resulted in the omission of Chapter 25, which discussed the use of sperm oil at coronations); and any perceived grammatical or even stylistic anomalies were handled with "a highly conservative interpretation of rules of 'correctness'."

Of the copies that have appeared at auction in the last 40 years, four have been in their original bindings, while two have been in contemporary bindings.

A handsome copy of "one of the strangest and most wonderful books in the world" -D. H. Lawrence